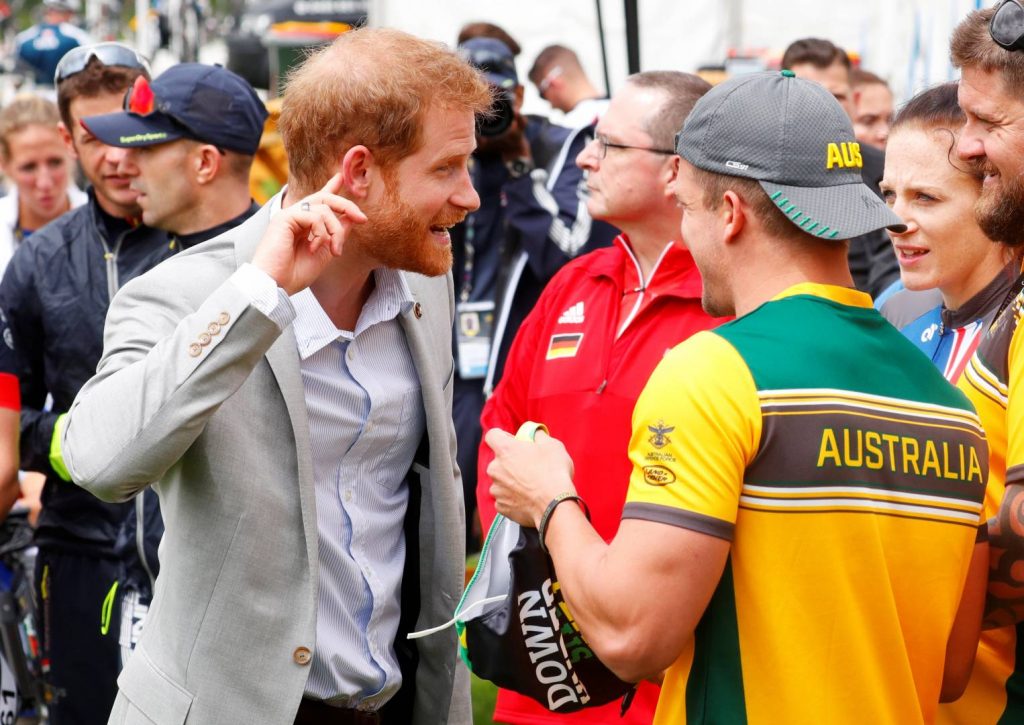 “Winning can be about a lot more than winning medals. Winning is about just doing better, and doing something that you have not done before – that’s when you see the spirit of sport,” Invictus Games ambassador and multi-gold medal Olympian, Ian Thorpe.

The recent announcement of pending parenthood by Prince Harry and new wife Meghan Markle at the start of their Australian royal tour has sparked a global guessing game of possible names for the next royal baby. While royal experts have nominated Albert or Victoria as among the most likely names for the royal couple’s first-born son or daughter, Invictus could be in with a sporting chance.

Although not a traditional royal moniker, Invictus is already a Harry favourite given the prince’s role as father figure of the Invictus Games, the sporting phenomenon Harry created for war-injured military men and women, which has touched, transformed and even saved competitors lives.

While Harry and Meghan’s high profile visit to Australia has included many staples from previous royal tours such as school visits and meeting cute koala bears, this royal expedition was planned from the very outset to enable Harry to attend the Invictus Games in Sydney and participate in key events at iconic Games venues across the Harbour City.

While members of the Royal family are traditionally allocated areas of duty and responsibility, the Invictus Games is Harry’s by choice.

Invictus was conceived by Harry after attending the US Warrior Games for wounded members of America’s armed forces and later brought to life in London in 2014, with a little help from the old firm and some of Harry’s closest friends and advisors who shared Harry’s Invictus vision.

These included Sir Keith Mills in particular who is also in Sydney to help oversee the Invictus proceedings and brand for Harry.  A world leader in strategic marketing and a key London 2012 Olympic Games organiser and America’s Cup national yachting team manager, Sir Keith led the London team that delivered the first multi-nation Invictus Games event within the tight 6 month period that was available on the international schedule to plan and launch Invictus.

It soon became clear that Invictus would be an event for and of the times, using sport to help heal the physical, mental, personal and national wounds of war as experienced through the climate of terrorism, institutional failure, geopolitical uncertainty, and rapid technological change in modern society.

Prince Harry was involved in all major planning decisions and used his royal charisma and connections to mobilize political, commercial, celebrity, media and international support for Invictus stretching across more than 12 nations.

Harry settled on the all important name of Invictus, from the poem that inspired Nelson Mandela during his epic struggle against apartheid, in which sport played a key role. The omens were looking good.

Invictus would be a different international event, based on sport, hope, cutting edge biotechnology, and resilience of the human spirit.

I worked on preparations for the inaugural Invictus Games in London, and remember the extraordinary stories of bravery, survival and recovery in circumstances of almost incomprehensible injury and adversity that began to emerge as the first Invictus participants were registered.

These included competitors who had lost limbs, and often, almost their lives, stepping onto concealed explosive devices or while trying to dismantle activate bombs and suffered brain damage, extreme traumatic stress, depression, or personality disorders in the service of their country.

Despite such horrific injuries and setbacks, the Invictus competitors found the means and motivation through sport to somehow carry on, compete, and represent their nations again – on the sporting field instead of battlefield.

Competitors like British Lance Corporal Derek Derenalagi, who was pronounced dead after being blown up by an explosive device in Afghanistan. Miraculously, while a body bag was being prepared for him, a medical officer detected a pulse and saved Derek who went on to compete in the Invictus Games.

I also recall the memorable testimony about the power of sport given at the Orlando Invictus Games by Sarah Rudder, who lost one of her legs following an injury she suffered while in the US Marine Corps helping to recover bodies from the debris of the 9/11 Pentagon attack.

Sarah, who won the first gold medal in Orlando, said: “Sport saved my life. It showed me that I can do and be something, and that I can be part of a community again.”

The Invictus Games has also witnessed performances never seen before on the sporting field or thought possible in sport.

“I don’t think anything could be more inspiring than seeing a guy who lay bleeding to death in a ditch in Afghanistan now running 100 metres in Paralympic time,” said Invictus Games participant, Royal Marine Andy Grant.

Commenting on the Invictus Games, respected international sports commentator Rob Hughes said:  “If there is a single theme to their efforts, it is spelt out by the athletes themselves. They have no time, or inclination, for self pity.”

Many of the events are taking place at Sydney’s Olympic Park, the scene for one of the world’s greatest sporting events, the 2000 Olympic and Paralympic Games, largely delivered under the guidance of senior IOC member and current Australian Olympic Committee president, John Coates.

Since then however a series of doping, funding, administration, sexual abuse, and corruption scandals have rocked the sporting world, draining many major international sporting events of political and public support, and triggering strong community opposition against hosting such events, including the Olympic Games in particular.

The affordability, humility, and humanity of Harry’s new  international boutique model for sport by contrast has resonated strongly with international audiences, governments, community groups, sponsors and celebrities, enabling the Invictus Games to move almost effortlessly from one host city and country to the next.

In The Royal Spotlight

While images of Harry and Meghan are beamed around the globe as the world’s most photographed and popular couple come in and out of Sydney’s Invictus venues mingling with crowds,  competitors, and celebrity royalty – including Invictus ambassador David Beckham – some of Prince Harry’s most important work is taking place out of camera range, in more secluded settings and meetings with Invictus athletes, teams, and families as Harry urges on the Invictus community to “never underestimate the power of sport.”

Band Of Brothers In Sport

As I witnessed at Invictus in Orlando, Harry uses his understanding of the horrors of war, based on active duty in Afghanistan, to bond almost immediately with Invictus competitors from different cultures and war zones.

Harry does this with warmth and empathy and in ways that comfort, console and inspire. He communicates his message of hope and support through sport in ways that I have not seen a major sporting event figure or leader do before, other than London 2012 Olympic Games chairman and IAAF President, Sebastian Coe.

Despite the corruption of sport, Harry and his Invictus athletes have provided a much needed new narrative about the purpose and possibilities for sport as a potential source of change in people’s lives, even in the extreme conditions of modern society.

Poolside in Orlando, Invictus Games ambassador and multiple gold medal Olympian, Ian Thorpe, who understands sport, tellingly observed: “Winning can be about a lot more than winning medals. Winning is about just doing better and doing something that you have not done before – that’s when you see the spirit of sport.”

Prince Harry is the first royal to start and lead an international sports movement, and seems to have inherited his mother Diana’s passion for taking on important causes, which, poignantly, included the removal of landmines, devices very similar to the IEDs responsible for much of the damage suffered by the Invictus Games participants.

Harry’s Invictus vision has drawn comparisons with that of the founder of the modern Olympic Movement, Pierre de Coubertin, and also Dr Ludwig Guttmann, father of the Paralympic Movement. While both were overlooked for the Nobel Peace Prize, neither has the impact of Prince Harry’s Invictus Games been widely recognised or appreciated.

Perhaps it is not too late to give the Nobel award to Prince Harry, as a surprise successor to these two great visionaries and father of the Invictus Games for placing sport back in the service of humanity.

***MICHAEL PIRRIE is an international communications and major events consultant and commentator on Olympic and world sport. Michael has worked on Olympic planning committees and on the London 2014 and Orlando 2016 Invictus Games.