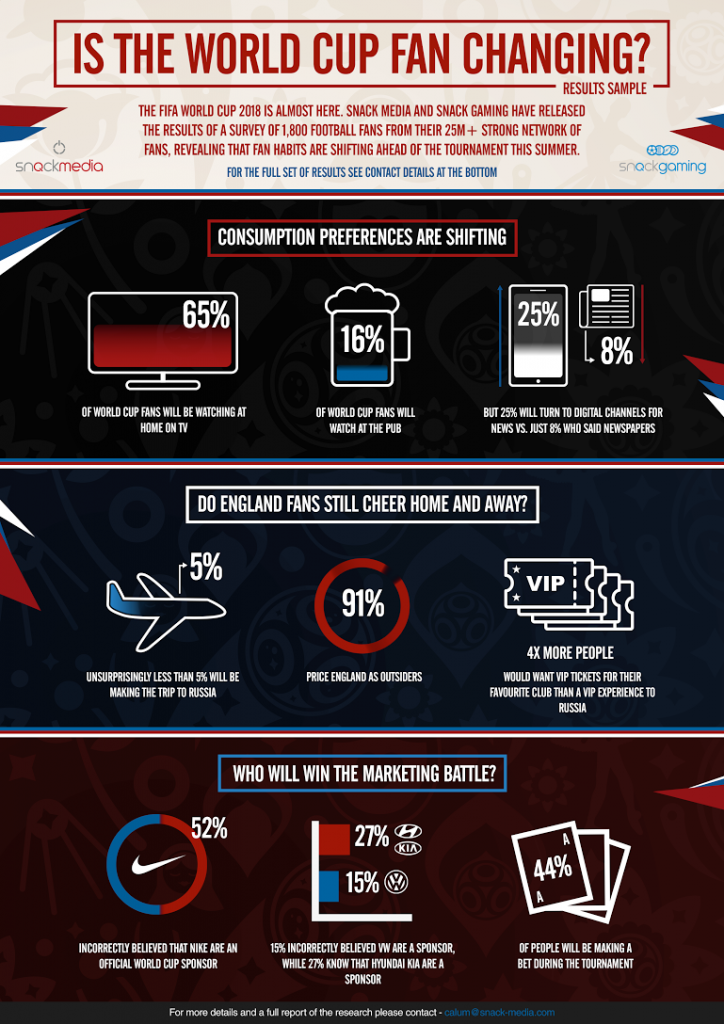 The 2018 FIFA World Cup has the potential to be a landmark event for the sports marketing and digital industry as never before has digital consumption been so high or so well understood.

Snack Media’s research reveals that next year’s tournament will be won and lost by the delivery of a broad range of personalised content and digital engagement tools across multiple channels.

1,800 football fans from our 25 million-plus strong network were surveyed to find out how supporters will consume the event, revealing that fan habits are shifting ahead of the tournament.

We covered a range of topics, from viewing preferences and betting insight to sponsor recall, and the results of the survey highlighted that both media consumption and attitudes towards the England team are changing.

The research also revealed, unsurprisingly, that live television will still be the main viewing destination, with 85% planning to watch the action on television.

However, pubs will need to make a big marketing push to get people off their sofas as only 16% intend to leave home for the local. Meanwhile, digital channels will be the main media platform for consumption – just 8% of those surveyed will go to a national newspaper for news and insight compared to 45% who said Sky Sports and 25% who will use various official and unofficial digital channels.

England fans seem more pessimistic than ever about the team’s chances in the tournament – an overwhelming 91% named Gareth Southgate’s men as outsiders – and just 3% will be making the trip to Russia.

In fact, four times more people would like to win tickets to watch their favourite club in action rather than watch England’s group games in Russia, and just over three times more would rather win a home entertainment system than watch the Three Lions take part in ‘The Greatest Show on Earth’. Germany emerged as favourites among punters, 40% of whom would be willing to stake £100 on Die Mannschaft to lift the trophy.

• The main companion for television viewers during matches will be social media on their smart phones, not their mates (66% will be watching at home vs. 5% round their mates’).

• Pubs will need to make a big marketing push to get people off their sofas and into the local (just 16% intend to watch at the pub).

• Live television is still the main viewing destination (85% will be watching on TV).

• Live action is the biggest marketing opportunity: nobody will be watching the highlights on delay (just 0.28%).

The research demonstrates the level of personalisation that fans want. Sponsors and advertisers will need to deliver a broad range of content and digital engagement tools across multiple channels.

Rupert Pratt is Co-Founder of Snack-Gaming.com and Director of Mongoose Sports & Entertainment