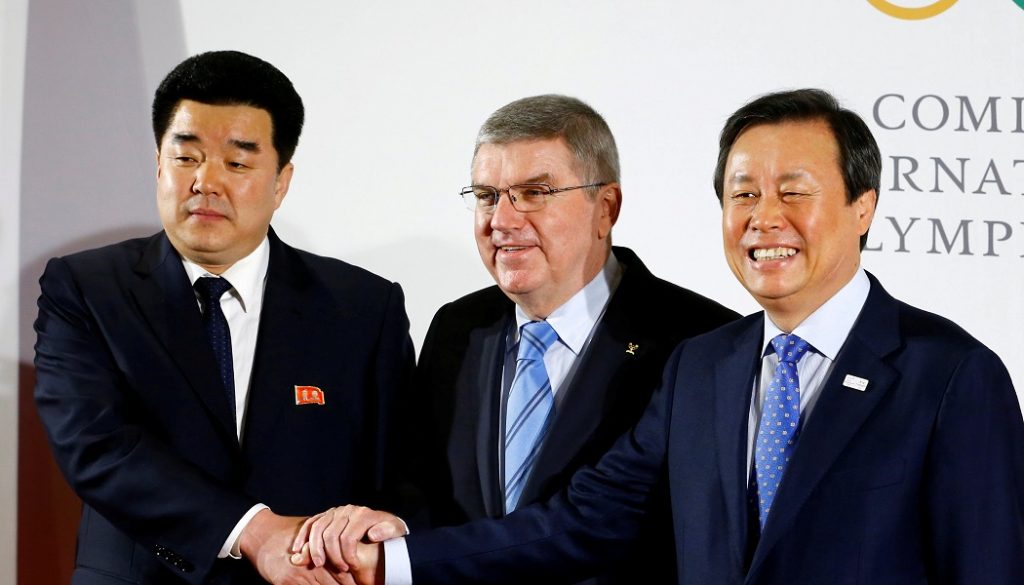 South Korea – with a lot of help from the North – delivered a joyous and inspiring opening ceremony that transcended the traditional sporting and cultural focus of the occasion, filling the Olympic stadium in PyeongChang with moving images and moments of hope in a region bitterly divided by history and a fleet of new nuclear missiles.

The warmth and symbolism created in the ceremony of a shared future in peace on the peninsula also transcended and tested reality.

With the US threatening severe sanctions against the North after the Games and the North proceeding with a powerful military parade just over the boarder, fears were growing the ceremony of peace could collapse under the weight of intense geopolitical pressures and international expectations of a North-South Olympic reunion.

The two Koreas however defied history and political gravity, participating in an unprecedented pageant of peace that will live long in the world’s memory of recent sporting, political and Olympic history.

More than ever Olympic ceremonies are digital screen experiences with Disney-like storylines and special effects, and the PyeongChang ceremony travelled to legendary Disney destinations, including stop overs in Frontier Land and Fantasy Land as the ceremony blended, suspended and augmented past, present and future possible realities of life on the peninsula.

While high tech formations of mythical Korean creatures, cultural icons and giant hologram of a human snowboarder in the sky set the scene for the Pyeongchang Games, it was a low key everyday expression of human contact in the VIP box high above the stadium floor that touched the world and changed everything about these Games.

The handshake between the President of South Korea and sister of the North Korea dictator secured the safety of the Games and athletes competing in the shadows of the North’s nuclear missile launching pads.

The handshake was brief but almost miraculous given the deep tensions that separate the two Koreas and their allies at opposite ends of the political and human rights spectrum.

The gentle gesture of personal contact between the two was as historic in the circumstance as past encounters between late IRA commander Martin McGuiness and Queen Elizabeth 11 of England, and Israeli Prime Minister Menachem Begin and Egyptian President Anwar Sadat.

This was not Reykjavik but it was an expression of inter Korea solidarity that symbolized the deep yearning on the peninsula for more peaceful relations after prolonged suffering and trauma caused by war and opposing political systems.

And like Reykjavik, progress made in Pyeongchang could pave the way for a modern day perestroika  on the peninsula and possible treaty agreement on use of nuclear weapons in the region that could enable the two Koreas to co-exist in relative peace.

While Olympic ceremonies in recent times have reflected on themes and issues important to host cities and global audiences – from indigenous reconciliation (Sydney 2000; Vancouver 2010); and young people and sport (London 2012); to environmental and urban regeneration (Rio 2016), rarely has the Olympic mission to promote peace been so relevant and so close to home as in South Korea.

Coming after a spate infrastructure budget blow outs, bid city corruption investigations and controversial doping rulings that have threatened the Olympic ideals, the impact of the Pyeongchang peace ceremony has been immediate, re-energizing the IOC leadership with a new narrative that focuses attention back on the relevance of Olympic values in uncertain times.

Host cities have previously included opening ceremony segments dedicated to peace, but rarely has peace been such a constant theme throughout the entire ceremony as in Pyeongchang – for the John Lennon peace classic Imagine, which has become the unofficial Olympic Games anthem it is played so often now in games ceremonies, to the North and South Korea united opening ceremony march updated from the Sydney 2000 Games; and climb by North Korea and South Korea ice hockey players to the top of a steep ramp supporting the Olympic cauldron of peace, symbolizing how far the two Koreas have come and heights scaled in this epic Olympic partnership.

While the Korean ceremony opened a window on important political issues in the region and beyond, IOC President Thomas Bach used the occasion to confront the most urgent issue in world sport, and provided a new focus on what it means to be an Olympian: “You can only really enjoy your Olympic performance if you respect the rules and stay clean,” Bach told Olympic teams in Pyeongchang and athletes, sports fans, coaches, and young people on the worldwide ceremony broadcast, his comments aimed also at Russia’s government controlled national Olympic committee that was disqualified from Pyeongchang  for alleged state-sponsored cover-up of doping activity involving athletes and others in testing procedures for banned substances.

Despite the icy reception that greeted news of the initial meeting between representatives the two Koreas on Olympic collaboration approximately a month ago, there is no knowing where that meeting in an isolated part of the demilitarized zone under satellite surveillance could lead.

The sister of the North Korea dictator has invited the President of South Korea to visit her state, further extending the hand of friendship just hours after the two first engaged in a hand shake at the opening ceremony, demonstrating that progress is possible even in the most unlikely of circumstances.

The Korea coup is a major political achievement in sports diplomacy, and has captured the imagination of the international community, even prompting calls for the IOC to be nominated for the Noble Peace Prize.

The real hope however must be that the Pyeongchang Olympics lead to meaningful change, beginning with meaningful reunion opportunities for war displaced and separated families, a high priority on the peninsula, in order to achieve a more peaceful if not fully united Korea and build a better Tomorrow Land.