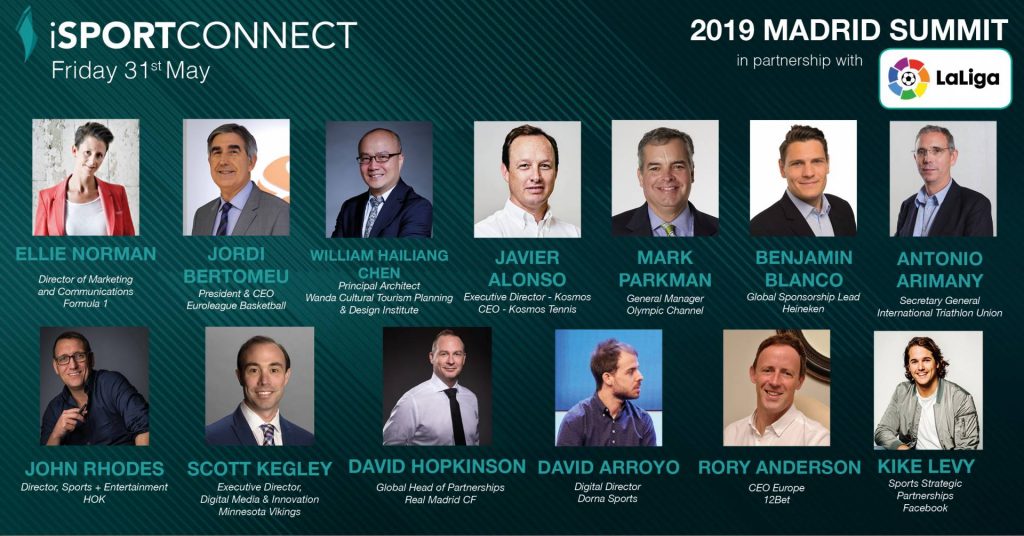 iSportconnect is delighted to announce that Heineken‘s Benjamin Blanco, Jordi Bertomeu of Euroleague Basketball, and Antonio Arimany of the International Triathlon Union (ITU) are set to join the lineup for our 2019 Madrid Summit. Held on Friday 31st May at Callao City Lights, the day before the highly anticipated UEFA Champions League Final hosted at Atlético Madrid’s Wanda Metropolitano, this event will kick off iSportconnect’s Global Event Series.

Jordi has been CEO of Euroleague Basketball since July 2000 and President since 2011. He has a degree in Law from the University of Barcelona, ​​and later joined the BAR Association of Barcelona. From his beginnings in 1982, he developed tasks as Legal Counsel and Secretary General of the Association of Spanish Basketball Clubs (ACB), and in December 1994 was appointed Vice President of the same association, a position he held until July 2000, when he became CEO of Euroleague Basketball. Currently under his direction are the two club competitions of the highest level of European basketball, the Turkish Airlines EuroLeague and the EuroCup, these are disputed each year among the best clubs in Europe.

Jordi has been a member of the Spanish Government Commission for the transformation of football and basketball clubs into Sports Public Limited Companies, member also of the Executive Committee of the Spanish Basketball Federation for 12 years, as well as referee for the Olympic Committee in the Court of Arbitration for Sport since October 1997. He also has experience as a Professor of Sports Management at the University of Barcelona and the University of Madrid.

Euroleague Basketball is a global leader in the sports and entertainment business, devoted to running the top European competitions of professional basketball clubs under a unique and innovative organisational model. Owned and administered by some of the most successful and historic clubs in the world, EB manages and organises the continent’s two premier men’s basketball competitions, the Turkish Airlines EuroLeague and the 7DAYS EuroCup, as well as the sport’s premier under-18 showcase, the EB Adidas Next Generation Tournament.

Antonio has held the role of Secretary General of the International Triathlon Union (ITU) as well as Chair of the Legal Group of ASOIF since 2016, and became an ICAS Member this year. Previous to this role, he was the Director of Legal, Finance and Administration at the ITU from 2010 to 2015. Antonio’s other experiences include being the Managing Director of the Madrid Olympic Bid (2004-2005 and 2006-2009) and Jaca Olympic Bid (2005-2006). He was a specialised sport lawyer in 2009-2011; a Regional Manager for NOCs, Organising Committee of the Athens Olympic and Paralympic Games; President of the Royal Spanish Winter Sports Federation (2001-2002) and General Secretary (1996-1997).