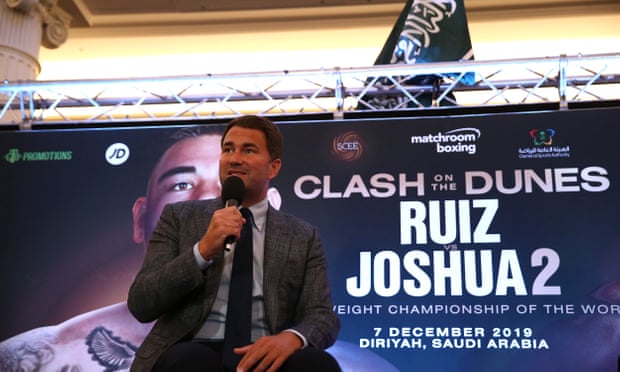 Eddie Hearn, the promoter of heavyweight boxer Anthony Joshua, is dismissing concerns over the decision to contest the championship re-match against Andy Ruiz Jr. in Saudi Arabia in December.

“Every promoter under the sun has been trying to land a mega fight in the Middle East for many, many years,” Hearn said yesterday in an interview in London with Rob Harris of The Associated Press. “I’m the one that’s done it, and with that comes a little bit of a stick because we’re the trailblazers behind that.”

The human rights organisation Amnesty International contends Joshua will be part of “sportswashing” — the Saudi government being given a chance to cleanse its image.

“What I do know is all the events that they have been running have been hugely accepted by the public, enjoyed by the public and you will see when Joshua fights Ruiz in Saudi Arabia the public will love this event. They will grow the sport of boxing in that region.”

Hearn sees no reason why he should not cash in as long as other sports events and concerts are being held in Saudi Arabia.

Just last week, the Saudis announced plans for the world’s richest horse race in Riyadh in February with a $20 million prize pool.

“Financially, obviously, it was a good deal for A.J.,” Hearn said.

Many in Italy were outraged when one of the country’s soccer trophies — the Super Cup — was contested in Jeddah in January, with Cristiano Ronaldo’s Juventus beating AC Milan.

While laws have loosened in the kingdom with women now allowed to drive and attend events at sports stadiums, there have been reports several women’s rights activists have been tortured while in detention.

Minaj said she wanted to show support for women’s rights, freedom of expression and gay rights. Hearn showed a lack of awareness of the country’s anti-LGBT laws, and the impact on visiting boxing fans or any gay members of his own staff.

“You’re asking me questions that are more political based,” Hearn said. “I’m a sports promoter and how I answer that is, is that they have a vision for the sport of boxing and a vision for sport. You either believe in that, or you think that has potential, or you refer to other stories.”

Stories such as the investigation into the brutal killing of Washington Post columnist Jamal Khashoggi at the Saudi consulate in Istanbul last year. Saudi Arabia has denied any involvement by Crown Prince Mohammed bin Salman but its own investigation acknowledged the operation was planned by two of the prince’s top aides.

“We knew the criticism we may face when we announced it,” Hearn said.

Hearn has turned to journalism recently by hosting an interview podcast series for the BBC.

“I refer to the fact that I’ve been to Saudi to an event,” Hearn said, citing the World Boxing Super Series final in Jeddah last year when asked about the Saudi state being implicated in Khashoggi’s death. “It was a first-class event.”

There is no disassociating the Ruiz-Joshua title fight from the Saudi government, with the General Sports Authority’s name appearing under ‘Clash on the Dunes’ on the news conference set in London on Monday.

Hearn said he also had offers from Qatar, Dubai and Abu Dhabi across the Gulf. The bout will be aired on streaming subscription service DAZN in the United States and by Comcast-owned Sky in Britain.

A purpose-built 12,000-seat open-air stadium will be the setting in Diriyah on Dec. 7 for Joshua’s attempt to win back the IBF, WBA and WBO belts he lost to Ruiz at New York’s Madison Square Garden in June. Buying a ticket will secure a tourist visa for visiting fans.

“Men and women are all welcome to this event,” he said. “We’ve got to make sure that as many fans attend the events possible.”

Hearn was asked about any of Joshua’s Israeli fans, who would be unable to enter Saudi Arabia.

“That’s one well beyond my head as a sports promoter,” he said. “What I can tell you is, again following in the footsteps of major organizations that have staged very, very huge events.”