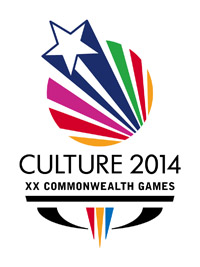 The Organising Committee of the Glasgow 2014 Commonwealth Games today (Tuesday 16 July) launched its official Cultural Programme and unveiled the new brand that will promote the year-long countdown of events.

The Glasgow 2014 Cultural Programme will be a key part of the Games experience for spectators and visitors.  Running from the ‘One Year to Go’ milestone in July 2013 until the end of August 2014, it will showcase the best of Scottish culture alongside creative work from across the Commonwealth and be a nationwide celebration of the Games, reaching its peak as Glasgow bursts into life at Games time.

There are two strands to the Glasgow 2014 Cultural Programme – itself a collaboration between the Organising Committee, Creative Scotland and Glasgow Life. These are:

Culture 2014 will kick off this year and is the Scotland-wide cultural countdown to the Games, extending beyond the Closing Ceremony. Many events will happen from mid-June to tie-in with the Queen’s Baton Relay – the global precursor to the Games – as Scotland’s towns and communities celebrate as the baton passes through.

Festival 2014 is the massive Games-time celebration in Glasgow running alongside the sporting action, transforming the city from 19 July to 3 August with an invigorating mix of entertainment, culture and enjoyment filling the streets, spaces and stages of Glasgow.

Highlights of the Glasgow 2014 Cultural Programme include:

News Just In by Random Accomplice will be a continually evolving, satirical comedy set in a fictional media office of Glasgow 2014. Described as ‘part 2012’, part ‘Drop The Dead Donkey’, it will mix live theatre, a live ‘studio’ audience, filmed news reports and on-line content to explore the everyday office stress of organising an international event of the size and scale of the Games.

Blueblock Studio – An interactive pop-up space for children aged 4 and under and their parents and carers to participate in energetic and immersive storytelling performances linked to Commonwealth values of friendship and understanding. Led by artist Katy Wilson and produced by Starcatchers, Blueblock Studio will visit communities right across Scotland.

Organisers are also delighted to confirm that the previously announced exhibition celebrating 25 years of contemporary art in Scotland, Generation, and the first ever New Music Biennial, including performances of 20 new commissions in Glasgow on 2 – 3 August as part of Festival 2014, will become part of the official Cultural Programme along with the hugely successful country-wide initiative Get Scotland Dancing.

Another major commission as part of Cultural programme will see a disused site nearby to the Emirates Arena and Sir Chris Hoy Velodrome in the east end of Glasgow transformed by a public artwork.  For Making the Most of Dalmarnock, which is promoted by VELOCITY, Create London, architects Assemble and Scottish artist Ruth Ewan will work with local communities in Dalmarnock to design and construct a permanent outdoor learning and play area.

Scottish Opera, Louise Welsh, Tam Dean Burn, Claire Cunningham, Aidan Moffat, Paul Fegan, Janice Parker, Cora Bissett, Kieran Hurley, Phil Collins, Janey Godley, the Scottish Poetry Library, the Citizens Theatre, and Barrowland Ballet are also among the artists and organisations who will take part in a programme that will be a massive part of the Games experience for spectators, residents and visitors.

Eileen Gallagher, Independent Director on the Glasgow 2014 Board and Chair of the Ceremonies, Culture and Queen’s Baton Relay Committee, said:

“With just over a year to go, Glasgow and Scotland are on a global stage – and our best artists and performers are about to showcase the very finest of Scottish and Commonwealth culture to the world.

“As we count down the days to Glasgow 2014, the entire nation can celebrate and be part of the Games, with an ambitious programme of performance and entertainment which will touch every corner of Scotland. Then as all eyes turn to Glasgow, the city will burst into life with a massive celebration which will provide an entertaining and memorable Games time experience, for citizens, spectators and visitors alike.”

“The Glasgow 2014 Cultural Programme will certainly complement the drama and excitement of live sport that will take over the city and its venues at Games Time. We very much welcome today’s announcement which I am sure will create an electric atmosphere in Glasgow and around Scotland in the build-up to the athletes taking centre stage next year and right throughout the competition.”