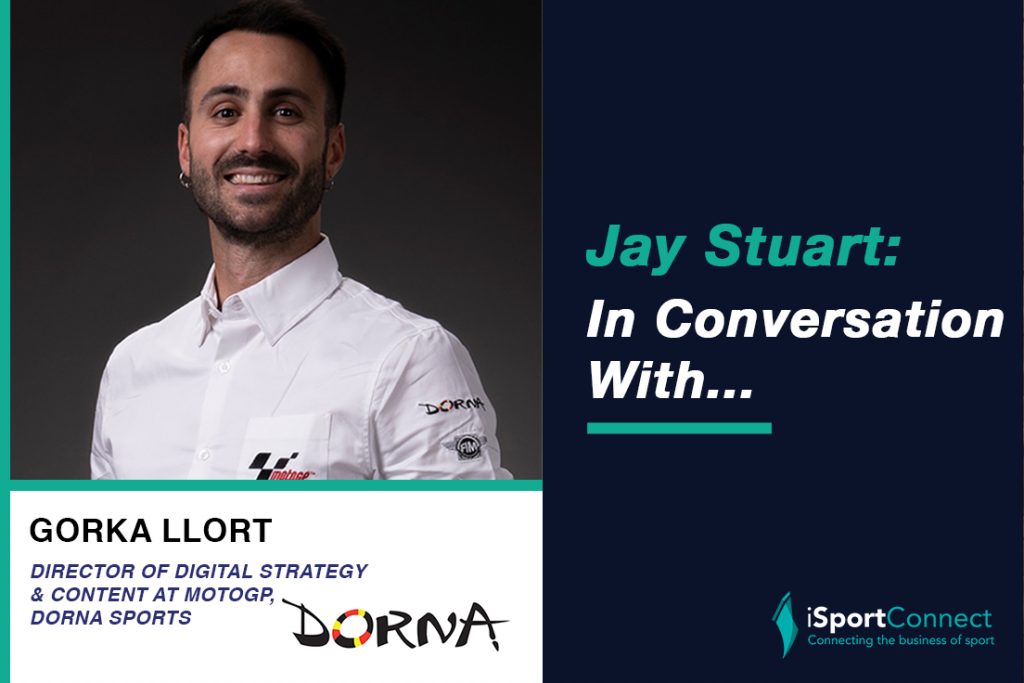 Ahead of iSportConnect’s Digital & Data eMasterclass on Thursday May 20th, Jay Stuart speaks to Gorka Llort, Director of Digital Strategy & Content at MotoGP for Dorna Sports, about how Dorna is evolving their OTT offering in the latest ‘In Conversation With…’

As more and more rights owners explore and embrace OTT, one organisation in particular stands out as a genuine pioneer − Dorna Sports, long-time owner of commercial rights for the sport of motorcycling and its flagship MotoGP series, which enters its fifth round on the track at Le Mans in France this weekend.

In a market where direct-to-consumer services that have been around for five years are already considered venerable, Dorna launched MotoGP on OTT almost 20 years ago.

You might think that being in the OTT market for so long would bring about a weakening of the relationship with traditional broadcasters.

You might think that being in the OTT market for so long would bring about a weakening of the relationship with traditional broadcasters. Quite the contrary. Indeed, a lot of the energy Dorna devotes to its OTT options is aimed at helping its broadcast partners and they have focused on becoming better at doing just that.

“Broadcasters are our main partners,” says Gorka Llort, Dorna’s Director of Digital Strategy & Content. “The money they pay us and especially the distribution their channels give us make them the foundation of our business and as such they are the first consideration in shaping our content strategy.”

That said, there are two particular points to bear in mind about broadcasters.

First, MotoGP has limited TV airtime. That’s not because the broadcasters don’t want to show the series but because the events only take place for a few hours every two weeks during the season. Second, the broadcast partners in any given territory change over time.

“The distribution their channels give us make them the foundation of our business and as such they are the first consideration.”

These two factors make an OTT service indispensable as a complementary offer. The key to making it really work is having a large volume of content. MotoGP has tons and tons of content of different kinds.

This enables Dorna to layer its OTT offering. There are three layers of OTT (delivered with the help of connectivity partner Tata Communications).

One is available for free, the second requires users to register and the third is behind a paywall for €140 a year.

The paid option offers the live race content – and MotoGP’s live race content is in itself massive in volume. Dorna, which does all its own production, has 180 cameras at an event. That means all the things happening on the track at any given time are being covered. No broadcaster can do that with a single feed.

“We’re lucky,” says Gorka. “If you watch a football game on TV you don’t miss anything. If you watch one of our races, you’re only seeing a small part of what’s going on.”

All the competing riders in MotoGP have at least two cameras and most have three or four and that also goes for the two support racing series, Moto 2 and Moto 3. The OTT subscriber has access to more than 60 continuous feeds, mostly of content never shown on TV.

The pay package is not available in Dorna’s most important broadcast markets, where Italy (SkyItalia), Spain (DAZN) and the UK (Sky) retain exclusivity. In other markets,

All the OTT options and the data they deliver enable partner broadcasters and brands to run targeted campaigns. “It’s all about lead generation,” says Gorka, who will be taking part in iSportConnect’s Digital & Data eMasterclass on May 20 in a panel in the session Content: The Multi-Platform Challenge.

OTT also provides continuity from season to season. Dorna has over 50,000 videos in its MotoGP archive. That means fans don’t need to lose their connection to past seasons when live rights move from one broadcaster to another.

OTT is only one component of Dorna’s highly evolved digital operation, where long experience as a result of adopting digital early has paid off. “What we have learned to do over the years is monetise content,” Gorka says.

“Our digital team looks at every potential piece of content in terms of its value and we fine-tune specific content for each platform. That means making decisions. We don’t just pump everything out as soon as it’s available. We look at why, for example, we might want to hold back something and use it on TikTok after the race. If it’s three in the morning in Japan, it makes sense to wait until the next day. It’s all about extracting value from everything we have.”

One size does not fit all. That’s a big difference between broadcast and digital. As Gorka puts it, “Digital means less people doing things and more people thinking about things.”

Gorka doesn’t expect the fundamental fact of their primary importance to change in the coming years but the market will evolve of course and one of the shifts will be that more broadcasters will have their own OTT services. At present out of the 80 that have MotoGP rights about 10 already have them. In 15 years it will probably be 70.

From the beginning, Dorna has been constantly adjusting its OTT offer.

To sign up to our Digital & Data eMasterclass, taking place between 2-5pm on Thursday May 20th, please follow this link –