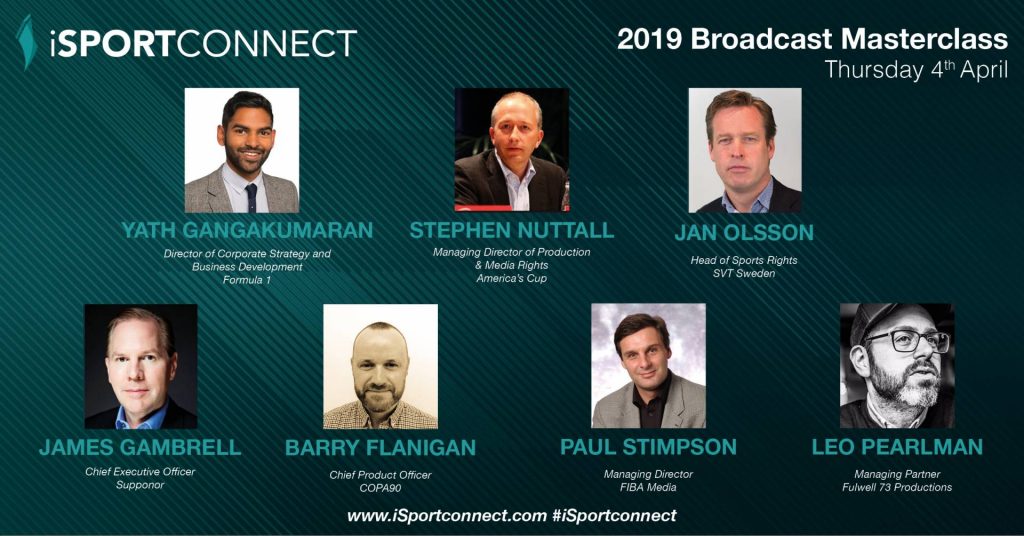 iSportconnect is pleased to announce that Michele Gosetti, Head of Global Sales at Eurovision, and Leo Pearlman, Managing Partner at Fulwell 73 Productions, will be speaking at our 2019 Broadcast Masterclass on Thursday 4th April. The event will be held at Fieldfisher in the City of London, and will bring together senior level executives in the industry to focus on new ways for media companies, rights owners and technology partners to prosper, thrive and grow as the digital revolution continues to disrupt the sports broadcasting market.

Michele assumed his current role with Eurovision Services in September 2017 where he oversees the global strategy for sales. Being in the media industry for more than a decade, Michele has a clear understanding of the market and a proven track record maximising revenues.

Michele spent 16 years in executive positions at Globecast where he successfully developed new revenue streams and put in place global sales strategies that helped grow the company’s core business. In 2013, he became Globecast America’s CEO where he raised the company’s profile in the US market and positioned Globecast in the digital arena. In 2015, he became Executive Vice President of the newly created Occasional Use and Media Services Division of Globecast before taking his current role with EMS. Michele’s international experience includes working in Europe, Asia and North America, including: Paris, Rome, Singapore, and New York.He completed his B.A. in Economics and Finance at Science Po in Strasbourg, France.

Following the creation of Fulwell 73 Productions in 2007, Leo has produced multiple hours of television and over 15 theatrically released scripted and documentary feature films. These titles have included the likes of “Hitsville: The Motown Story” (UMG), “Training Days” (Youtube), “I am Bolt” (Universal Pictures), “The Class of 92” (Universal Pictures), “Sunderland Till I Die” (Netflix), “One Direction: This is Us” (Sony/Columbia) and many more. A list of projects that have enjoyed commercial success across the board and critical acclaim that includes Emmys, National Film Awards, Brit Awards, International Film Festival appearances and nominations at a number of other prestigious events.

Alongside this Leo is the Managing Partner of the Fulwell 73 group, heading up and overseeing all commercial matters both in the UK and US. His role is one that encompasses business development and growth targeted strategy, as well as the day to day running of the ever expanding Fulwell team and production slates.​

To register your interest in attending the 2019 Broadcast Masterclass, please contact Chloe McCombie at info@isportconnect.com

Invitation Policy: The Broadcast Masterclass is a complimentary event for iSportconnect members who are from governing bodies, sports teams, brands and broadcasters. There is no fee to become an iSportconnect member. No sports agencies, professional service providers & suppliers are allowed.