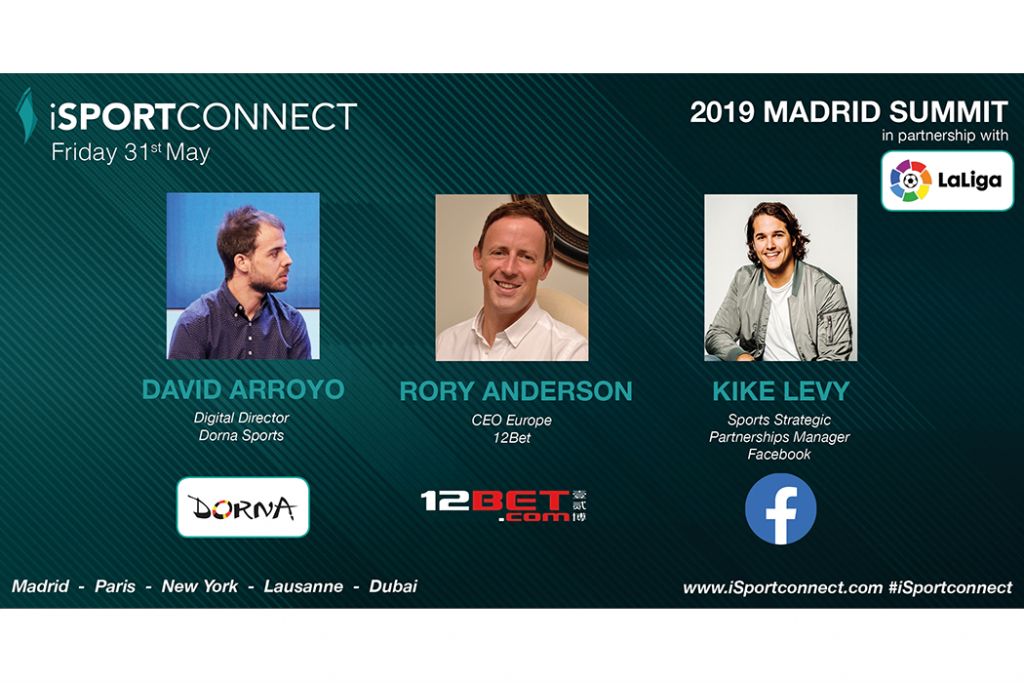 iSportconnect is delighted to announce that our 2019 Madrid Summit will feature Kike Levy of Facebook, Rory Anderson of 12Bet and David Arroyo of Dorna Sports. To be held on Friday 31st May at Callao City Lights, the day prior to the highly anticipated UEFA Champions League Final hosted at Atlético Madrid’s Wanda Metropolitano, this event will kick off iSportconnect’s Global Event Series.

With over seven years of sports media and marketing experience, Kike is Facebook’s Strategic Partner Manager for the sports industry across EMEA. He designs, consults and implements digital strategy for sports partners, and was instrumental in delivering some of the most socially engaged sporting moments of 2018, including the FIFA World Cup, UEFA Champions League and LaLiga. Prior to Facebook, Kike worked at Twitter as well as media rights and marketing agency Infront Sports and Media.

Rory entered the gaming space in 2003.  He joined 888.com (then named Casino-on-Net) as Sports Marketing Manager, becoming the second member of the offline marketing team.  Rory then joined Empire Poker as UK General Manager. Empire were then acquired by Party Gaming where Rory went on to enjoy a Senior marketing position. He joined 12BET as CEO in 2010 and is now acting as a consultant and strategic advisor for both 12BET and ONEworks, Rory is still heavily involved in the sponsorship space having been responsible for partnerships with over 10 Premier League clubs, and World Championship level sponsorships with a variety of sports.

David has led the Dorna Digital team since late 2017, covering MotoGP and the entire portfolio of Championships in Dorna Sports. Since then, MotoGP have radically changed their digital content strategy obtaining record viewing and engagement figures. MotoGP was a pioneer in launching their OTT service in early 2000 and is still the leader across Social Media channels for fans of Motorsport with over 25 million followers across Facebook, Instagram, Twitter and Youtube. Having quickly progressed through the Dorna ranks from web editor, Live Content Specialist and a Media Sales Executive, David was from 2015 to 2017 the Media Director for World Superbike, setting up the entire media team from scratch including Content, Communication, TV Production and Media Sales. From 2011 to 2014, David was also part of the team launching the Mobile Advertising business for Telefonica Digital.