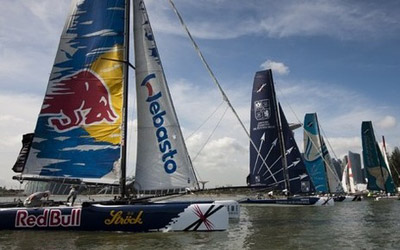 Leading independent evaluation agency, price viagra Havas Sponsorship Insights, has confirmed the final media value of the 2012 Extreme Sailing Series at €27.8million ($36m) over the seven Acts in 2012 versus €25.7million ($33.2m) in 2011 over nine Acts.

A growing international interest and an ever-stronger TV news and programming footprint including live broadcasts from five venues in 2012, is strongly reflected in the increase in media exposure across all platforms in what was the second year of global touring for the original stadium sailing Series that visits iconic venues in traditional host venue territories as well as new markets around the world.

The Extreme Sailing Series has seen a significant increase in global media value year on year, and Havas Sponsorship Insights, who has evaluated the media value for the Extreme Sailing Series since 2009, when the media exposure was valued at just €5.9million ($7.6m), use the same consistent methodology that demonstrates the strong media growth. Despite having seven Acts on the calendar compared to nine in 2011 and 20% less race days per event (five days per Act in 2011 versus four days in 2012), the Series has importantly shown a marked increase in media coverage as it enters its seventh year on the international sailing calendar.

Mark Turner, Executive Chairman of Series organisers OC Sport, commented: “Whilst it is important to note the significant global scale the event is now attaining, for us it is the relative year on year performance that remains the most important measure and it is good to see the upward trend continuing, particularly when we had two less events than the previous year. Havas apply exactly the same quite harsh methodology year on year so we can measure this progression accurately. Importantly, we can continue to confidently market the Extreme Sailing Series to existing and new stakeholders in the knowledge the circuit can deliver significant, and continually growing, media return to our sponsors, teams, event partners and Host Venues. The media coverage is fundamental to underpinning the key values of the circuit, which include the premium B2B ‘money can’t buy’ VIP experience, the appeal of the stadium format as a public event and a sport that remains relatively uncluttered.”

“In 2013, we have set ourselves a tough target to increase the media coverage again by a further 25% to continue adding value across the board. Admittedly, there are very obvious sporting properties for sponsors who are seeking pure brand visibility but the Extreme Sailing Series is now an excellent property for premium brands to reposition themselves via an annual and global sporting series going to traditional and emerging sailing markets in a sport that retains an aspirational and clean image.”

Print media coverage saw more than a 10% increase in media value (to a total of €10million) attributed to the quality of coverage and conscience effort by the Series organisers to focus on more mainstream print media globally, while online media values increased to over €1.8million. Aside from the evaluated media coverage, the Extreme Sailing Series also saw a significant increase in their online fan base in 2012, with a 232%increase in Facebook fans and a 84% increase in Twitter followers – but at actual levels which organisers OC Sport consider still well below the potential for the event, an area of focus for 2013.