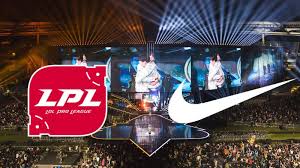 Nike has signed a four-year sponsorship deal with Tencent for its League of Legends Pro League (LPL), becoming one of the head partners of the top esports league.

The partnership was announced today by TJ Sports, a new joint esports venture created in January by Tencent and Riot Games on January 10.

After landing 10 sponsorship deals for the 2019 season including Mercedes-Benz, KFC, L’Oreal, Alienware, LPL signed its first deal with a sports brand.

Details of the deal are not officially disclosed, but sources familiar with it told Lanxiong Sports, the first sports business content provider in China, that Nike will spend around RMB50 million ($7.5 million, including cash and cash equivalents) a year to buy out the apparel rights of all the 16 LPL clubs.

Nike and LPL will share the sales revenue of the Nike products featured LPL elements at a confidential ratio.

A source close to LPL told Lanxiong Sports that other sports apparel companies also considered to acquire the deal with LPL, including Adidas and Chinese sports brand 361°.

TJ Sports was officially established in January, which to some extent dragged the pace of the deal; Second, there were some problems in the process of trademark registration for several LPL clubs and those clubs had to replace a newly-designed logo, which cost time, too.

The deal between Nike and LPL confirms that sports brands are showing willingness to invest real money into the esports market. For LPL itself, the investment from Nike further affirms the value of their esports IP.

With the title of 2018 League of Legends World Championship won by Chinese esports club Invictus Gaming, LPL has obtained an unprecedented influence in the esports community.

According to data revealed by TJ Sports earlier this year, the total viewership of LPL in 2018 climbed 50% to 15 billion, compared with 2017. And the final game of 2018 League of Legends World Championship had  a record 99.6 million viewership.

But in comparison with the huge viewership, the marketing value of esports has still been underestimated. Even the leading clubs in LPL can hardly have a head partner which are willing to give them RMB10 million ($1.5 million)  or more for a club naming rights fee.

The esports league in China, King Pro League (KPL), which is a mobile esports game also published by Tencent, has already signed an apparel sponsorship deal with HLA Jeans.

A source near the deal told Lanxiong Sports that HLA Jeans will pay around RMB10 million ($1.5 million) a year to KPL as equipment sponsor, and the official announcement will be released on the opening day of 2019 season on March 6.

The new Nike-LPL agreement still has some wrinkles to iron out.

Under the deal, all LPL players, coaches and team staff will exclusively wear Nike apparel on game days. This would create an issue for teams with existing apparel partners, or those looking to sign apparel deals in the future.

Edward Gaming (EDG), for example, was partnered with Chinese local sports brand Li-Ning before the 2018 League of Legends World Championship and the partners had the intention of reaching a long-term deal.

But Yang Guang, Director of Marketing of Li-Ning, told Lanxiong Sports in an earlier interview that the company, was aware that it would not be able to sign a sponsorship deal with EDG without violating the contract between Nike and the LPL.

As to the partition of the LPL commercial rights, Lin Song, former head of Riot Games China and current co-CEO of TJ Sports, told Lanxiong Sports in November 2018, that the league was working out a model referring to the mature sports league like NBA and European soccer leagues.

Even in the biggest leagues, the commercial rights in the apparel sector differ from one to the next. For instance, the NBA collectively sold apparel rights to Nike, but clubs in European soccer leagues can independently sign apparel deal with brands.

In October 2018, Nike collaborated on a campaign with LeBron James to promote the basketball star’s upcoming documentary Shut Up & Dribble, which featured Jian “Uzi” Ziha, a player from LPL team Royal Never Give-Up (RNG). Nike has said that was just a simple marketing campaign.

On February 27, the day before the official announcement of the Nike deal, consumers could still find the LPL’s own-branded products on the LOL Official Online Store.

The prices were RMB199 ($30) for a T-shirt, RMB319 ($47) for pants and RMB619 ($93) for coats, relatively low prices compared to the conventional sports apparel. Given that most esports fans are youngsters, whose spending power is questionable, how to price and sell the products are two main concerns for Nike.

According to the official media brochure from TJ Sports, some items of the Nike-LPL products will be put on sale publicly during 2019 LOL Mid-Season Invitation.

As for the official Nike-branded team jersey, we will not see the samples until 2019 League of Legends World Championship, and fans can buy them in 2020.