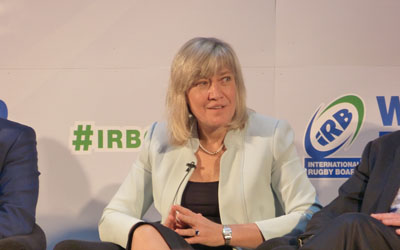 The chief executive of the England 2015 Rugby World Cup has told iSportconnect that important lessons have been learned from the recent test event for the tournament.

Debbie Jevans was speaking to iSportconnect from Twickenham where she oversaw the final leg of the World Cup volunteer recruitment drive which started in June this year.

On Saturday November 22, medic beat 28-9 in the third match of the QBE International Series. But crucially, order the event was a test for logistics and travel around an evening kick-off, like the situation next year at the opening match between and at Twickenham for example.

Jevans revealed she was happy with how operations ran overall, but admitted that there were plans that had to be reworked.

“It went well,” she said. “We tried a number of different things which included direct buses to , we used as a park and ride, there was partial closure of the A316.

“We learnt lessons. There were some angry people because things didn’t always go to plan, and that is why you have a test event. But what it did show us is that the park and ride at Kempton went really well and we will do that. We will be doing the buses to which is another innovation.

“So we learnt a huge amount and as we speak the team is back at base doing a big debrief from it and seeing what we have to put in place for the future events that we’ll have. Overall I was pleased but one thing you can’t legislate for is the weather and it poured with rain so we even had a flood. But that itself was also a test.”

The ceo explained that people were frustrated with queuing times and that travel times to and from , for example, were much longer than publicised.

“Some of the times we published we missed them and we need to understand why and make sure we change that which we will do for 2015 – and that’s why you test,” Jevans said.

Conversely, the mood has been high at the volunteer tryouts which have visited every World Cup host city interviewing 6,000 potential candidates who will be known as The Pack.

The roles will be similar to those of the Games Makers seen at the London 2012 Olympics and Paralympics – who Jevans is familiar with having been Director of Sport for the Games organising committee.

“Of the 6,000 what is really important is we recognise the fact that people are volunteering week in-week out for sport,” she said. “It’s not just the big events that get the profile; there are hundreds and thousands of people that do volunteer at rugby clubs and other sports clubs throughout the country.

“So we wanted to first ensure we rewarded those, which is why 75 per cent of our volunteers are going to come from clubs but then equally the knowledge of what happened in 2012 we’ll have 25 per cent who are possibly new to volunteering.

“But the key thing from what you saw in 2012 was how important the volunteers are. They become, without question, the face of the event. They are the ones, be you an athlete, be you the media, spectator, your first interface is with a volunteer so it really hammered home the importance they have in event delivery.”

Even for people who missed out on being a volunteer, there is still a chance to be at the tournament despite the huge demand for tickets.

Tickets for matches still available go back on general sale on Friday, having been offered first to applicants who were unlucky in the first ballot in September.

The prices range from £7 to £715 but organisers are still confident that every match will be sold out.