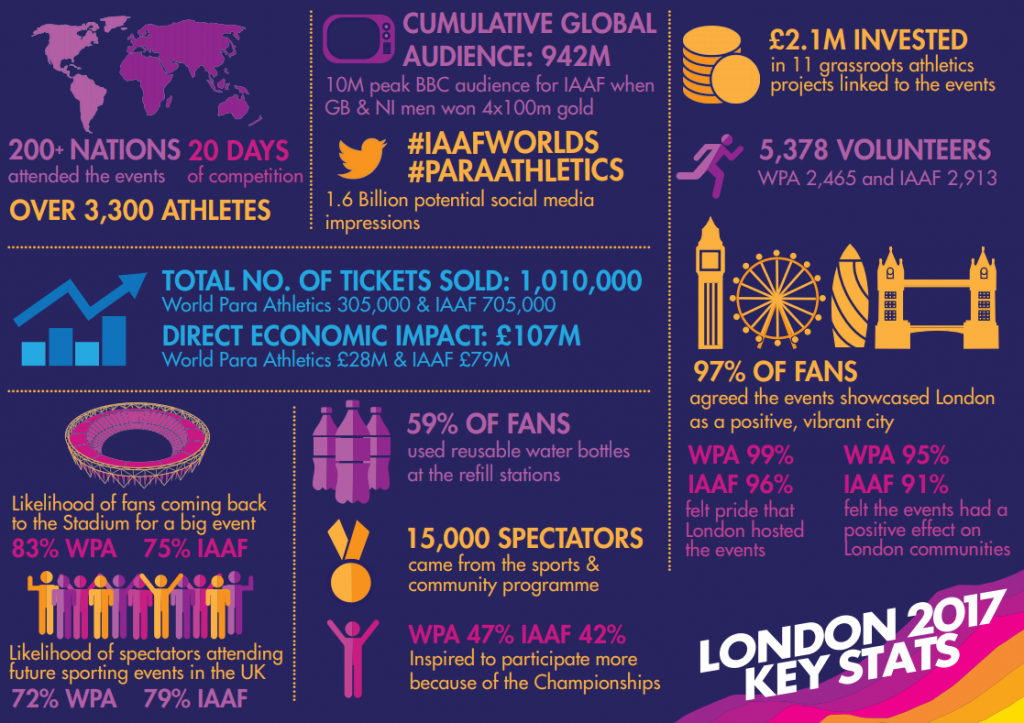 As the sporting calendar almost draws to an end, an event impact study has demonstrated the huge benefits of London hosting the world’s biggest sporting event in 2017.

The study, undertaken following the World Para Athletics Championships and IAAF World Championships London 2017 has revealed the positive impact the ‘Summer of World Athletics’ had on the city with unprecedented results achieved.

London became the first city ever to host both the World Para Athletics Championships and IAAF World Championships in the same year with more than 3,300 athletes from more than 200 nations competing in 30 sessions across 20 days.

The study, delivered by The Sports Consultancy, in partnership with Nielsen Sports, Gracenote and PCSG, assessed the total direct economic impact of the Summer of World Athletics as exceeding £107million.

More than a million people attended both Championships with events not just held in the London Stadium but across the capital. The IAAF World Championships were awarded a Guinness World Record for tickets sold in excess of 705,000, whilst the World Para Athletics Championships with 305,000 ticket sales, exceeded the figures for all previous editions of the event combined.

The report also revealed that a £2.1million investment was made into grassroots athletics and running with the official inspiration programme and ‘Team Personal Best’ engaging with 250,000 people through 733 events with 250 held in the host city alone. Further to that, an average 45% of those surveyed said they had been inspired to do sport or active recreation more often than usual as a result of attending the Championships.

The Championships also impacted audiences across the globe via broadcast and social media. On digital channels there were a recorded 1.6 billion potential impressions for the official hashtags #IAAFWorlds and #ParaAthletics. In addition the official mascot of the IAAF World Championships, Hero the Hedgehog, reached 4 million through the two main highlight videos on Facebook whilst the BP ‘Energy Within’ Campaign video featuring Richard Whitehead, released around the World Para Athletics Championships, attracted over 10 million Facebook views.

Finally, in the UK alone more than half the available viewing audience – a 10m peak – tuned in to see the British Team success in winning the 4x100m relay gold at the IAAF World Championships, and overall the events achieved a 942m cumulative viewing audience.

The Mayor of London, Sadiq Khan, said: “When it comes to hosting global sports events, this unforgettable summer proved once again that nobody does it quite like London. Our great city made a huge success of hosting both the World Para Athletics Championships and the IAAF World Championships – the first time both events had ever been staged in the same stadium, in the same year. London 2017 provided a lifetime of memories and showed that London is, without question, the sporting capital of the world.”

“Not only can we reflect so positively on the efforts that went into organising what are unanimously being regarded as ‘best ever’ championships, UK Athletics is immensely proud of all the British athletes who competed in London this summer. We are confident the performances demonstrate we are in great shape as we continue to prepare for the Olympic and Paralympic Games in 2020.”

Xavier Gonzalez, the IPC’s Chief Executive Officer, said: “The World Para Athletics Championships in London were by far the best yet, taking the event to a whole new level. Record crowds and broadcast audiences around the world were rewarded with record breaking performances by the Para athletes.”

IAAF President, Sebastian Coe, said: “It has been a phenomenal year of athletics, at the epicentre of which were the outstanding IAAF World Championships London 2017. We witnessed the greatest number of athletes, the highest level of performances and largest stadium audiences ever seen across the event’s 16 editions. This report shows the positive impact of hosting an IAAF World Championships.

“We would like to thank the Mayor of London and London 2017 Organising Committee for their dedication in documenting the event and its impact and creating with us the first comprehensive report that will enable the IAAF to have informed and detailed discussions with future cities wanting to host our events.

“Hosting sporting events must provide mutual benefit to a city, a country, the sport, the fans and all partners. London was a potent advertisement of the power and passion that athletics ignites and the strong and exciting future that awaits it when our sport delivers it right.”

UK Sport CEO Liz Nicholl, said: “Our own extensive research demonstrates that hosting major events provides significant social and economic benefits and we are delighted this new study shows this to also be the case with the World Para Athletics Championships and IAAF World Championships.

“Thanks to investment from the Government and The National Lottery, the UK has staged another world class event; these successful World Championships form part of our ambitious strategy to maintain the UK as a world-leading host of innovative and inspirational international sporting events.”

Iain Edmondson, Head of Major Events at London and Partners, said: “London once again showed the world how it puts on world-class sporting events that are exciting, welcoming and accessible for all, and that demonstrate #LondonIsOpen.

“This report demonstrates that, five years on from the successful 2012 Olympics, world-class events in the London Stadium continue to be an impressive draw for international visitors and Londoners alike.”

Matthew Wilson, Director of Consulting at The Sports Consultancy, commented: “This report clearly evidences the extensive impact the IAAF World Championships and World Para Athletics Championships delivered to London’s businesses and citizens. These events delivered a direct economic impact to London which significantly exceeds that generated by the previous editions of each event.

“Moreover, London 2017 delivered compelling evidence across a broad range of impact parameters, evidencing successful engagement of London communities, enhancement of London’s reputation as a global tourism, major event and business destination as well as a champion of diversity, and investment in sport participation – not just in London, but throughout the UK and internationally.”