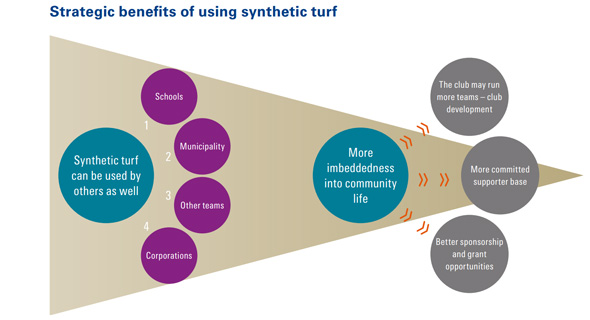 The European Synthetic Turf Organisation (ESTO) is an association formed to ensure quality turf and to provide information that can help clients and end-users find the most appropriate solutions in synthetic turf systems. ESTO is uniquely positioned for research/universities, abortion end users (clubs, leagues, sports governing bodies) and trade. ESTO is an organisation that brings everyone together to discuss, debate, research and develop the future of synthetic turf.

ESTO is a non-profit organisation and offers neutral and unbiased information for the promotion of synthetic turf, enhancing its numerous advantages and benefits. ESTO is a forum for all parties to meet and to facilitate communication along the business chain, from manufacturers to architects, installers, contractors, test institutes and particularly to the end-users.

ESTO is actively contributing to standardisation in order to improve test methodology and continuously strive for transparent and consistent harmonisation of the requirements for the large variety of sports performances.

A report with KPMG called the Synthetic Turf Study found that synthetic turf is “supported by FIFA, UEFA, and many football associations, whilst a range of top-tier clubs use synthetic fields across Europe.” The report also acknowledged that “synthetic turf requires maintenance, but general lower costs are incurred than when maintaining natural pitches.”

There are four main arguments used to support the application of synthetic turf:

A major positive for synthetic turfs is that they can be used more frequently than natural turf. Synthetic turf will drain well in wet weather, but natural pitches cannot be used immediatelty after heavy rain.

Synthetic turf therefore offers the opportunity to generate a steady, year-round revenue stream, not dependent on the on-pitch performance of the club. FIFA does however state that they should be restricted to 36 and 48 hours use a week.

A fundamental aspect of the business case for switching to synthetic, is the chance for a facility owner to generate extra revenue. There is higher demand in countries where they experience extreme weather conditions. There is a shortage of playing fields that are appropriate and therefore a synthetic turf owner can take advantage of commercial opportunities.

As the report says: “Our research findings show that with a proper business plan and professional management, some clubs can generate respectable revenues on a weekly basis, by renting out their synthetic field.”

FC Thun play in the Swiss first-division at the 10,000 capacity Arena Thun. Before the move, the club played on a natural pitch at the Stadion Lachen. The club could not make the most of the stadium because of maintenance and the need for longer resting periods. Revenue generation was primarily concentrated on match days.

Since switching to synthetic turf, FC Thun lets their stadium to private & business events twice a week. In the first year of operation they held more than 100 of these events and generated CHF 700,000 annually. This is CHF 100,000 more than would be possible on natural grass.

As well as extra revenue, there is also evidence for cost saving. Whilst maintaining the synthetic pitch is important, KPMG research shows that natural pitches require nearly double the amount of time spent on maintenance than synthetic.

As a consequence the cost of maintaining the pitch can be significantly lowe than that of natural pitches. Typical values range between €5-15,000 annually, compared to €20,000+ for natural pitches.

AS Nancy installed a new synthetic turf in 2010. Club management say the number of hours spent on maintenance has halved since switching from a natural pitch. This has saved the club considerably on wages and overall maintenance costs.

The club have also managed to host more events since changing to synthetic turf. Forty more events were held in 2011 than in previous years and rental income amounted to €20,000.

In general, a synthetic turf can enable greater community access to a stadium. Pitches can be used during the day by schools, which is something a natural pitch would not be able to withstand.

Some smaller and mid-sized clubs have a clear strategy for community involvement, which could mean they rent out the pitch for significantly lower rates. This can directly attract new customers to the stadium, who will provide revenue streams more directly, for example through food and drink.

This is crucial when a pitch is under public ownership or has some public support. Providing greater community access can play a key role in securing future projects with public support.

The KPMG report therefore shows the work ESTO is doing, is vitally important and has a very meaningful business case for different organisations. The switch to synthetic turfs can allow for more usage of the pitch, which can generate more revenue and save costs. Synthetic turfs also provide community strategic benefits that can provide your business with more loyal customers.

You can read the ful report from KPMG here