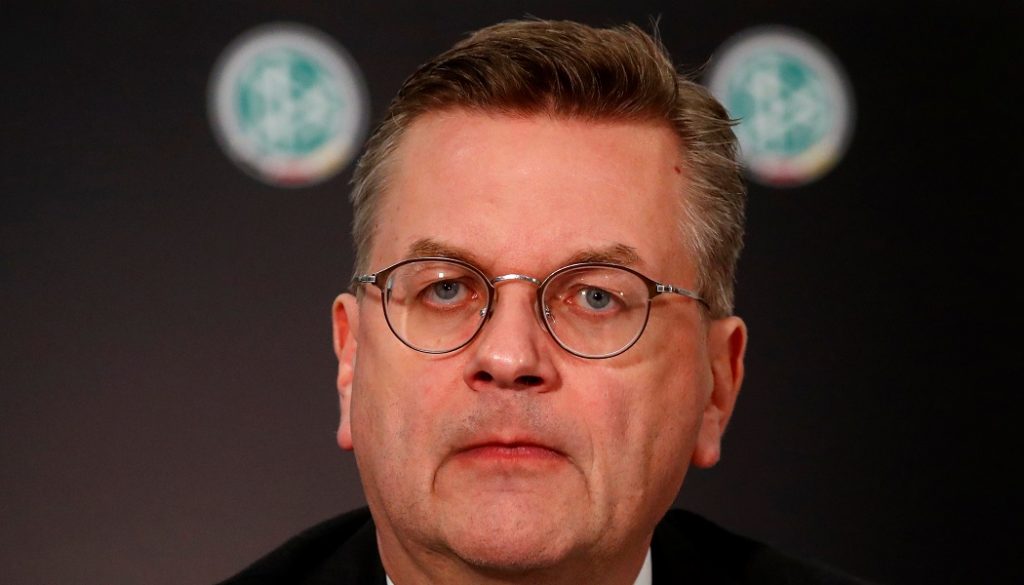 German Football Association (DFB) President Reinhard Grindel unexpectedly resigned on Tuesday after apologising for accepting an expensive watch from a Ukrainian colleague as a gift, saying he had not known its value.

Grindel, who took over the world’s biggest sports federation by membership in 2016, had come under pressure over income he received from a DFB subsidiary and a watch he had been given by Ukrainian businessman and soccer administrator Grigory Surkis.

“Everyone who knows me knows that I am not greedy. The price of the watch was 6,000 euros. I did not know the brand or its value at the time,” Grindel said in a brief statement to reporters.

“Mr Surkis had no commercial interests linked to the DFB. He never, before or after, asked me for any kind of support,” Grindel said.

“At the time it was clear he would not campaign for another term on the UEFA Executive Committee to which he now no longer belongs.”

“For me there was and is no conflict of interest. It was a matter of politeness to accept it.”

Grindel said he had shown the watch to DFB associates at the time and had mentioned it to colleagues in Frankfurt. But he said it was a mistake not to have known the value of it earlier.

“I cannot explain why I did not take action for swift clarity. I am stunned by my mistake. I resign as DFB president. I apologise for my less-than-exemplary action of accepting the watch.”

The DFB, which will host the Euro 2024 tournament and has more than 7 million registered members, said vice presidents Rainer Koch and Reinhard Rauball would be an interim solution until elections in September.

Grindel, a former journalist and conservative CDU member of parliament, had also been in the spotlight after a Spiegel report identified a 78,000 euro income he had received from a DFB subsidiary that had not been made public.

He is also a UEFA Executive committee member and a FIFA Council member, taking over at the DFB from Wolfgang Niersbach, who was forced to resign amid allegations of vote-rigging for the 2006 World Cup.

Grindel had virtually no international experience in football when he took over the role.

He oversaw the DFB-commissioned investigation in the 2006 affair that found no proof of vote-buying but could not explain the million-dollar payment via FIFA that eventually landed with a senior FIFA official.

Grindel was blamed for bad handling of the case of Germany player Mesut Ozil and his controversial photograph with Turkish President Tayyip Erdogan prior to last year’s World Cup.

Ozil retired from the national team after Germany’s shock first round World Cup exit last year and said he had faced “racism and disrespect” because of his Turkish roots.

Grindel had also been critical of coach Joachim Loew last month after he dropped Mats Hummels, Jerome Boateng and Thomas Mueller from the national team, before rowing back on his comments.

The Germans, four-time world champions, have seen a drop in popularity, ticket sales and ratings in recent years. They were also relegated in last year’s Nations League competition.