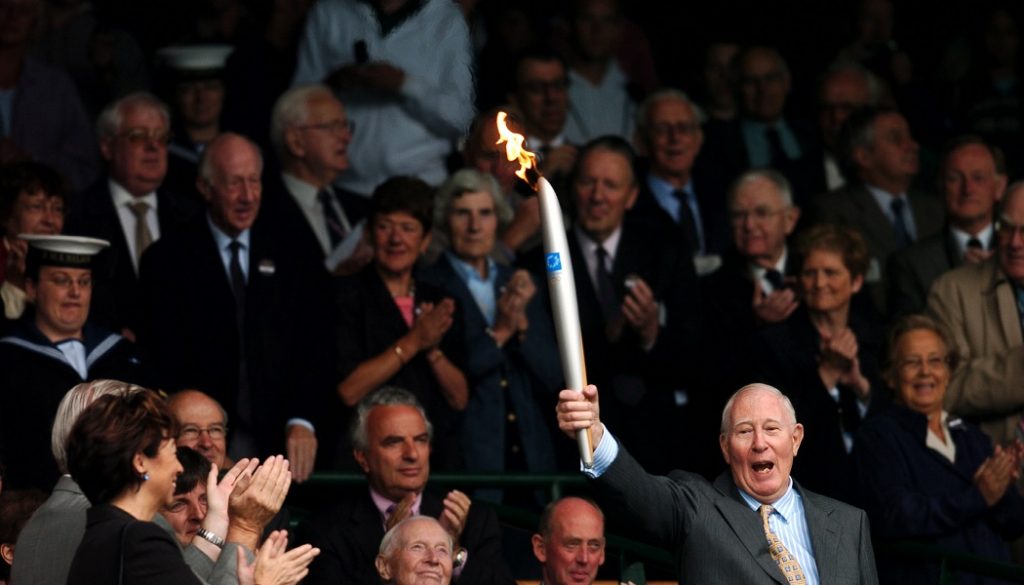 Those last few seconds of the historic 1954 first sub-four minute mile have, indeed, been never ending for Sir Roger Bannister, and nearly 50 years after the great race, Bannister’s name was at the top of a list of possible British sporting greats I found myself compiling to garner support for the bid to bring the Olympic Games to London in 2012.

We were preparing to launch the Olympic Games Bid in 2003, and wanted the endorsement of athletes who we thought could unite support behind the bid, including the great Daley Thompson, whose Olympic achievements and passion for the Games had been vital in building a coalition of support and confidence in London in the early stages of the bid process.

While a number of contemporary Olympians had offered their services in return for appearance money or support fees, Bannister’s deep humility prevented him from putting his name forward at all.

But when approached, Sir Roger gave unwavering support for the London 2012 Olympic Games, but never asked to be rewarded in any way. Yet Bannister’s support was priceless, and brought enormous credibility to London’s Olympic bid. Nor did Bannister seek any publicity or recognition for his roles in London 2012 or ask for a contract, as many others also did. A gentleman’s agreement was sufficient for this gentleman giant of 20th century sport.

Sir Roger assisted London’s Olympic bid behind the scenes in ways that did not require the public spotlight that he found tiresome and unhelpful, but which so many have sought through an Olympic association.

As arguably the most distinguished and respected of Britain’s living sporting greats at the time, Bannister’s association with the London Olympic bid helped to bring the Games back to the UK capital in 2012 for the first time since the London 1948 post war Olympics, which ironically, Bannister did not believe he was ready to compete in.

Bannister’s fame is unique in modern sporting history, in part because he turned his back on sport at the very pinnacle of fame.Bannister belongs in the pantheon of sporting legends, alongside Jesse Owens, Usain Bolt and Muhammad Ali, but unlike the golden Olympic trio Bannister never won an Olympic medal.

Bannister’s athletic achievements were so extraordinary that he transcended the Olympics – he used his defeat at the 1952 Olympic Games in Helsinki as the motivation to break the supposedly impossible four minute mile and retired from competition before the next Summer Olympic Games in Melbourne in 1956.

While Bannister never won an Olympic medal, his career included many Olympic connections, including a return to the famous Oxford sub four minute mile track setting in 2012 to carry the Olympic Torch in the countdown to the London 2012 Olympic Games.

Bannister has been the torch bearer for sporting excellence and fair play from the moment he ran into the sporting and world history records by breaking the mythical four minute mile.

The four-minute barrier was thought to have been so improbable that Bannister’s race was often described as ‘the Everest of Sport.’ In reality, it was more like the ‘Moon Landing of Sport.’

Bannister’s run was the human equivalent of breaking the sound barrier or travelling at the speed of sound in terms of the scale of the challenge and the global noise and conversation his run created.

Bannister’s milestone shaped the future direction of athletics and became a new metaphor for human achievement in the world of sport and beyond in wider society.

Bannister generated unprecedented global attention and interest in athletics and helped to elevate sport to new levels on the international agenda. The record-breaking run also focused new attention on international athletes and major sporting events like the Olympic Games.

Bannister also helped to turn the 1500 metres – or the old mile – into a premier Olympic event, and paved the way for new generations of middle distance runners and rivals, including Herb Elliot, Coe, Ovett, John Walker and many others.

A new sports marketing arms race dawned as athletes and nations raced each other like never before to set new records in previously unthinkable times and follow in Bannister’s footsteps.

Bannister changed everything, as rapidly growing television and radio audiences tuned in to follow the fortunes of a new generation of post World War 11 athletes who captivated and inspired the world with feats of endurance, speed and courage.

Bannister’s race against the Australian middle distance champion John Landy – who had broken Bannister’s initial sub four minute mile shortly after he set the record – at the 1954 Vancouver Empire (Commonwealth) Games was even described as the “Race of the Century,” which Bannister won.

After also winning the European championships, Bannister did the unthinkable again, this time retiring at his peak to escape the expectations of fleeting fame, and put his energies into a pursuit that he believed would enable him to make a greater contribution to society, in neurology.
If Pierre de Coubertin was looking for someone who embodied the Olympic spirit, it would be Bannister, who had the old world sporting values from Chariots of Fire, and was perhaps motivated as much by fear of failure as by success.

Even in the post Bannister era where we do not necessarily turn to sport for inspiration following a devastating series of corruption, administration, and cheating scandals – including a damming new report by the UK Government’s Digital, Culture, Media and Sport (DCMS) select committee into the fight against doping – Bannister leaves a towering legacy and message of hope for young people and future generations, and of redemption and direction for current athletes and federations.