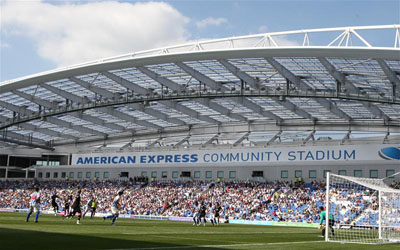 American Express, who also hold the naming rights for the stadium, will now have their logo on the front and back of the Seagulls’ newly designed shirts, as well as the development, youth and women’s team shirts.

Club chief executive Paul Barber said: “American Express has proven to be a fantastic partner as our stadium naming rights holder and key partner of our charitable arm, Albion in the Community.

“To see one of the world’s biggest and most respected companies extend its relationship with us in this way, cementing its position as the club’s main sponsor, is fantastic news for us.”

Barber continued: “This is a significant deal for the club and the biggest in our history. We are extremely grateful to American Express for its continued support.

“I would like to thank them for the invaluable expertise, assistance and advice they have provided to our club since the stadium opened, something that only a truly global brand can offer.”

“This is a natural extension of our successful partnerships with the American Express Community Stadium and Albion in the Community charity.

He added: “This new deal further underscores our long-term commitment to the communities of Sussex and surrounding area.

“We are excited about the future and look forward to supporting the local team as they go from strength-to-strength.”

Albion’s new strip will be unveiled at the American Express Community Stadium at 12:30pm on Wednesday 13 March