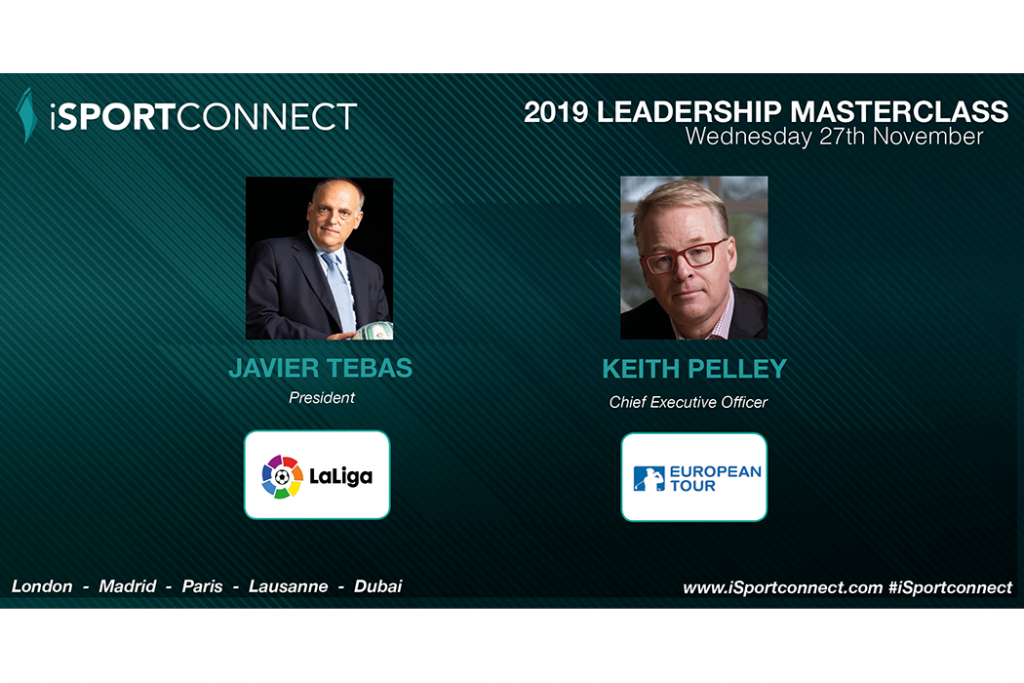 iSportconnect is delighted to announce that La Liga and European Tour first two speakers for the upcoming iSportconnect Leadership Masterclass, which takes place in London on the 27th of November.

Javier Tebas, President of La Liga, and Keith Pelley, CEO of The European Tour, are the opening two names to be confirmed to the event programme.

Javier founded his own firm specialising in business law and has served as legal advisor to several Spanish and foreign clubs and sports entities (SAD), as well as a director of numerous bankruptcy proceedings of companies and sporting institutions. Tebas exercises regularly as a speaker and guest lecturer at conferences, courses and seminars in Spain and Latin America. He is the author of several publications and articles in professional journals and in addition, he serves on the boards of several national and international associations. He became President of La Liga in 2013 after being president of SD Huesca and has held various offices throughout the league, most notably as a member of the Executive Committee and as both first and second vice president.

Keith became the fourth Chief Executive in the history of The European Tour in August 2015. Prior to joining The European Tour, he was President of Rogers Media in Toronto where he was responsible for leading the overall operations of the company’s diverse portfolio, including Television, Radio, Publishing, Digital Media, The Shopping Channel, subscription-based content services, the Toronto Blue Jays and Rogers Centre. Before that, he was Executive Vice-President of Strategic Planning at CTVglobemedia, President of Canada’s Olympic Broadcast Media Consortium, President and CEO of the Toronto Argonauts Football Club, and President of The Sports Network in Canada, a company he first joined as an Editorial Assistant in 1986.

The European Tour and Keith also today announced their new brand identity, more of which can be read about in this piece – https://www.isportconnect.com/european-tour-refreshes-brand-identity-to-attract-new-fans/

More speakers will be announced for the event shortly.

To register your interest in attending the 2019 iSportconnect Leadership Masterclass, please contact Joe at joe@isportconnect.com

Invitation Policy: The Leadership Masterclass is a complimentary event for iSportconnect members who are from governing bodies, sports teams, brands and broadcasters. There is no fee to become an iSportconnect member. No sports agencies, professional service providers & suppliers are allowed.