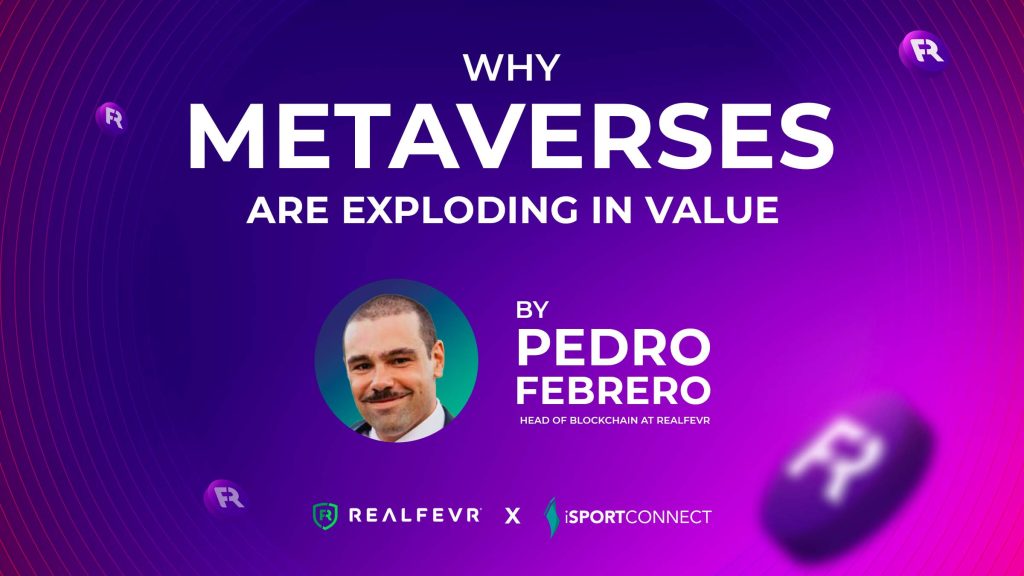 Why Metaverses Are Exploding In Value

The Metaverse is one of the biggest topics in the world right now. Pedro Febrero, Head of Blockchain at RealFevr, explains what it truly means and why their value is becoming exponentially higher.

‘Metaverse’ refers to the transformation of the physical space into the digital realm. In a way, it’s opening a Pandora’s box to a new universe of possibilities that will, in our humble opinion, become the new frontier for human interaction: one where avatars will rule the ‘metauniverse’, without borders, restrictions or physical limitations.

We believe that the critical innovation of the metaverse is that it will allow peers to create, connect, feel and live inside a digital community.

“The next major technological platform for creative expansion of the mind will be cyberspace, or more specifically the Metaverse, a functional successor to today’s 2D Internet, with virtual places instead of Webpages.” – Alex Vikoulov, “The Syntellect Hypothesis: Five Paradigms of the Mind’s Evolution”.

“While we acknowledge that cyber-communities have been there since the dawn of the internet, the revolution the metaverse is leading to is far greater than a few chat rooms”

Humans are social creatures, and like all social beings, we crave human companionship and interaction.

What’s the point of succeeding in life if there’s nobody there to cheer for you, love you and cherish those precious moments with you?

While we acknowledge that cyber-communities have been there since the dawn of the internet, the revolution the metaverse is leading to is far greater than a few chat rooms, giant social media and online marketplaces, behemoths, and gaming.

It’s our core belief that metaverses incorporate far greater features and embed technology that is unmatched by any web2 competitor that exists today. Not only is a metaverse a digital social space, but they also provide a “physical” digital space for users to build their infrastructure on (like Minecraft), open marketplaces of non-fungible and fungible items (NFTs and tokens), a voting structure for token holders to express their opinions and vision (Opensea, Snapshot), as well as open-protocols that enable participants to build financial systems (Maker, Aave) are interoperable and allow any peer to transpose items from one metaverse into another (Decentraland, The Sandbox, Cryptovoxels, etc.).

Essentially, Web3 opens the doors to a p2p-style matrix that connects every user to a dimension outside the “meat-space”.

How Do Metaverses Work?

As the metaverse grows, it will create online spaces where user interactions are more multidimensional than current technology supports. Instead of just viewing digital content, users in the metaverse will be able to immerse themselves in a space where the digital and physical worlds converge.”

“Metaverse projects generally have an internal currency that empowers participants to govern the protocol and trade.”

Metaverses exist in many different blockchains, such as Ethereum or Binance Smart Chain, and they create a set of tools and rules that enable participants to create virtual worlds and items. Metaverses typically incorporate a bundle of smart contracts that make them a highly complex Dapp and combine verticals from financials, governance, aesthetics, among other things.

Commonly, some boundaries limit the size of the virtual world, and users can acquire parcels to build their infrastructure on and to rent or sell. Additionally, metaverse projects generally have an internal currency that empowers participants to govern the protocol and trade.

Some metaverses have finished products, like Axie Infinity; others let users create their vision within, like Decentraland or The Sandbox.

Any project that creates a virtual digital economy through gamified steps (or games) has essentially started a metaverse.

According to Coingecko, the total market capitalization of metaverses projects is close to $30 billion. The three leading projects are Axie Infinity, Decentraland and The Sandbox.

“We think the upcoming years will be generous for all those who build their vision in these metaverses, given the many opportunities that will soon arise.”

While this represents spectacular growth and a massive opportunity to make some sick gains, we think these projects are just starting. The general population awareness for crypto is still relatively low, much less for metaverse-related projects.

Hence, we think the upcoming years will be generous for all those who build their vision in these metaverses, given the many opportunities that will soon arise.

Why Are Metaverses Trending?

“Ultima IV was the first game I wanted the player to respond to what I called ‘moral dilemmas and ethical challenges’ as they personally would [and not like an alter ego]. While doing my research on virtues and ethics…to look for ethical parables or moral philosophy I came across the concept of the word ‘avatar’ in a lot of Hindu texts. In that case, the avatar was the physical manifestation of a god when it came down to earth. That’s perfect, because really I’m trying to test your spirit within my fictional realm.” — Richard Garriott, in “Coining Term Avatar”.

According to Statista, the “Global Virtual Reality Gaming Services Revenue” will increase by  600% from 2017 until 2024, which shows the sheer interest by the general public in virtual reality games.

We add that this chart does not consider the massive growth of metaverse projects in the cryptocurrency space. For instance, there are NFT projects like Cryptopunks or Boredapes that create virtual avatars that are worth hundreds of millions of dollars. Another example is domain names (ENS, Unstoppable Domains) that enable a human-readable name for blockchain public addresses. These domain name resolvers link addresses to URLs, allowing the owners to receive payments directly to their domain names.

Hence, we conclude that the Cambrian explosion of metaverses has not yet begun. Once the total value generated reaches $1 trillion, that’s when we believe corporations and behemoths of the private sector will start to pay close attention and to put some serious coin into some of these projects.

Facebook’s recent move to change its name to “Meta”, shows how committed some organizations are towards the digital revolution.

What RealFevr Envisions For The Future

At this writing, the top three marketplaces had a combined daily volume of over $100 million and a total volume that has already surpassed $15 billion.

As we wrote above, while these metrics may seem impressive, we think these are still rookie numbers. What we are witnessing is just the tip of the iceberg. The potential growth that is still yet to be unlocked could go far beyond our wildest dreams.

“Our goal is not only to build critical innovation but also to spawn new revenue streams through services that meet all of our partners web3 needs.”

RealFevr is building towards that future by developing innovative tools in the DeFi space, such as tradable stakes, fractionalized borrowing and lending or NFT fusions; not only that, but we’re also leading the P2E gaming revolution by combining DeFi protocols with NFT-based games that enable a far juicier economical experience to the end-user.

Our goal is not only to build critical innovation but also to spawn new revenue streams through services that meet all of our partners (clubs and sports institutions) web3 needs, be it blockchain development, product design, consultancy and ultimately, guidance in navigating the metaverse.

To conclude, RealFevr has so far developed four main products: Fantasy leagues, NFTs (digital collectibles), the marketplace and the staking pools. Each product has massive traction and the profitability rate has been increasing throughout the years.

Our business model incorporates players, clubs and protocol launchpads, meaning that any project can deploy our technology at the click of a button.

If this piece interests you, you may like to know that we are hosting an open virtual workshop on Tuesday, December 7th at 2pm GMT looking at – The Next Chapter of the Internet: Engaging with the Metaverse via Augmented Reality.

If you would like to join the discussion, please email bethany@isportconnect.com