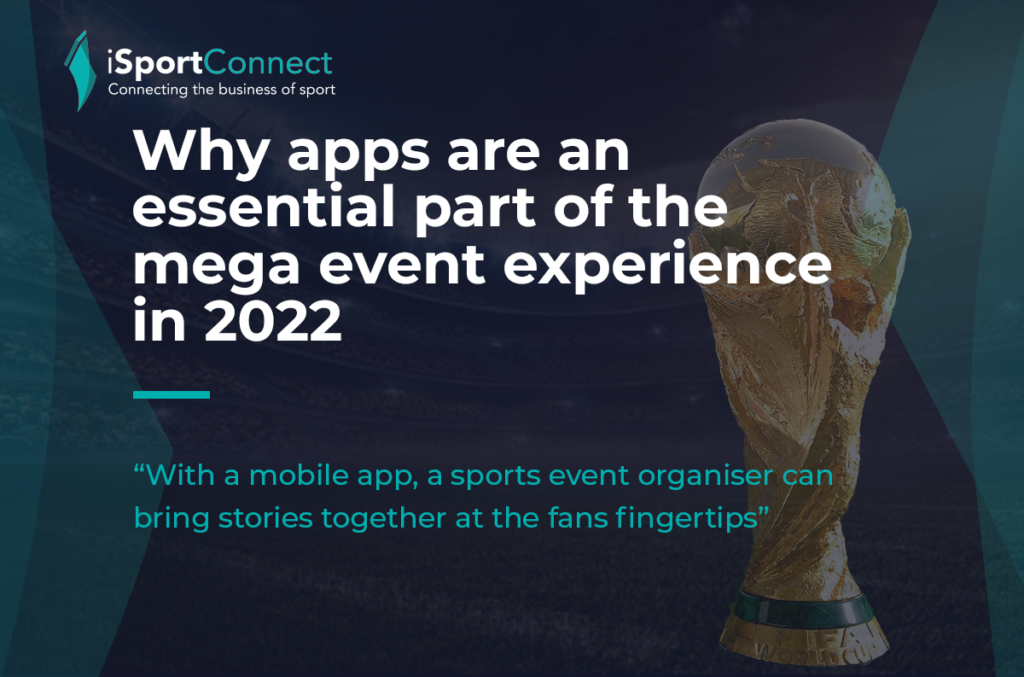 FIFA’s ticketing app nightmare on Monday brought apps and their role in the mega event experience into the spotlight. In this article we hear from Mikko Latva-Koivisto, Growth Marketing Manager at Choicely about why apps really are essential in 2022.

It’s time for the FIFA World Cup 2022, a tournament many of us have been waiting for four long years. The tournament truly brings the world together – it’s estimated to pull in 5 billion viewers, and over 3 million in live attendance.

A vast majority of these viewers will be using mobile apps during the games, both stadiums and homes. Mobile apps are increasing in popularity in sports events in all shapes and sizes.

But why so? Let’s explore the question further.

Sports fans use a second screen

Following sports with another device is common, practically universal, as 96% of us do it. For 74%, that device is their mobile phone.

During the game, fans browse social media to engage with other fans watching the game. They want to see others’ commentary and highlight clips of the match in real time. It’s also common to look for related information, like player bios.

When sports event organizers offer these functionalities through their own mobile app, they can essentially serve their audience on two screens at once. The app can also feature a live stream of the game in itself, focusing everything on one screen.

Apps serve the fans at the stadium

Whether there’s 1,000 or 100,000 attendees, a mobile app is the simplest communications tool at a sports event. Everyone has their phone and accessing apps doesn’t require many clicks. All content doesn’t even need a working internet connection.

In a sports event – and especially in a bigger tournament – there’s so much information that it’s useful to put it into one place:

Apps simply handles these jobs better than other digital channels would do.

Also, the event organizer can insert in-app purchases into the app, so fans could easily buy food, drinks, merchandise or tickets with their apps.

If there are real-time changes, organizers can react quickly and reach their fans no matter where they are by sending a push message. The messages can for example remind about a topical event or offer promotions – so fans get the most out of their event experience.

Apps take the story forward before, during and after the event

It’s not just about what happens during the match. Fans like to watch the highlights, read stories, and talk about the game afterwards. With a mobile app, a sports event organiser can bring all these stories together to the fingertips of the fans.

Organizers can also entertain fans with different activation tools, like:

and many other types of engagement

These tools entertain the fans and engage them with the organizing brand.

For many sports organizations sponsorships are their main source of revenue. Sponsorships are also effective, according to Nielsen’s 2021 study 81% of people trust sponsors who are visible at sporting events.

A mobile app brings in new ways to showcase sponsors, also in creative ways. Some activations in the app can be branded after your sponsor, like “Coca-Cola Man of the Match Vote”.

Sports organizations can also offer main visibility to one of their sponsors, starting from the welcome screen. Smaller partnerships can be placed in other spots.

A mobile app can also be used as ad space, where the ad feed is brought inside the app. For advertisers, the app offers clear visitor and usage data.

A sports mobile app should also feature seamless access to the ticket store and fan merchandise store. Once the fan is in the right mindset, it is much more likely to sell them merchandise or tickets to the next game. This can be further reinforced by using push notifications with timely offers.

Direct your existing fans to the app, collect data of their engagement with the app. Learn what works, what doesn’t, and iterate. With a mobile app you can also collect leads easily with activations, surveys and polls. On top of that, the sports event can also offer a premium subscription.

Get closer to the fans

If you’re a fan, the app is your icon. You get to make a deeper connection with the team that you follow. In the app, you will have everything you need from schedules to tickets and social media accounts.

Mobile apps are seen as premium products. Thus, an app is also a status symbol for the brand as well. And the mobile app is the easiest way to reach the sports brand, when measured in clicks.

At the same time, the cost of producing a mobile app is going down. Thanks to no code technology and drag-and-drop builders, more and more companies can produce their own apps. The trend is very similar to what happened with the growth of websites 10+ years ago.

People are already using phones and apps to support the event experience. Thanks to the ease-of-use, apps are such a natural fit with sports events both on and off site.

Our prediction is that in the future, apps will be even more common in sport events, big and small.

To learn more about what Choicely does click here