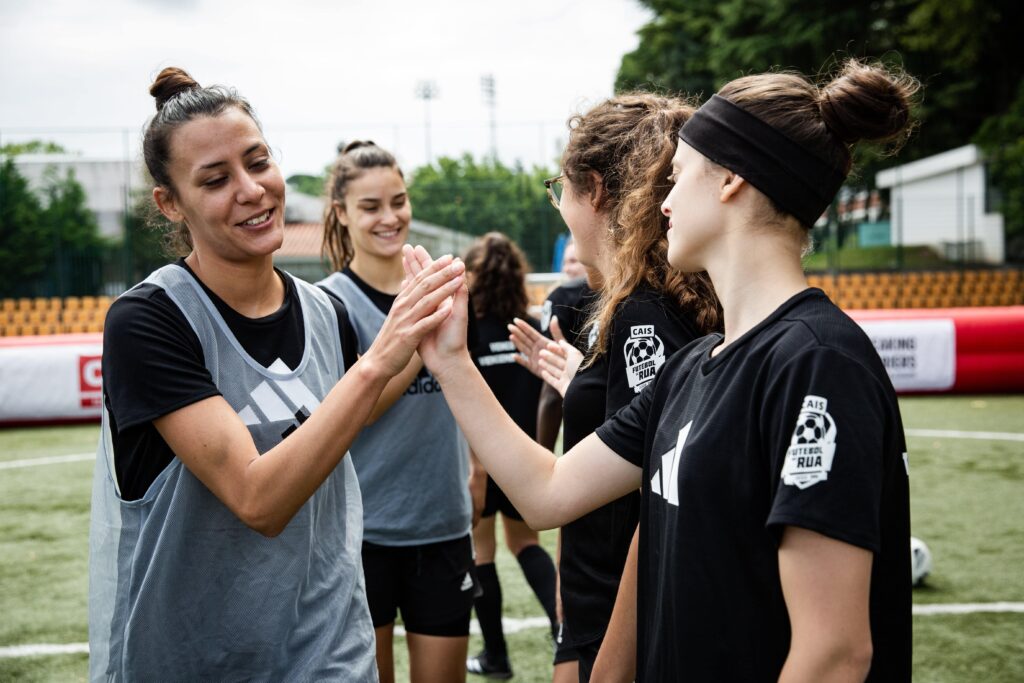 We all understand the power of sport to bring people together.

“It speaks to youth in a language they understand. Sport can create hope where once there was only despair. It is more powerful than governments in breaking down racial barriers. It laughs in the face of
all types of discrimination.”

Sport goes beyond fitness and competition. It teaches respect, focus, self-discipline, and improves mental as well as physical health. After the past few challenging years, people young and old have benefited from the opportunities that sport provides to improve and enhance their lives and, in turn, benefit society as a whole.

A 2022 United Nations report states: “Sport can be catalytic when it is shaped to improve people’s opportunities, confidence, and sense of belonging in the short run, while laying the ground to change mindsets and build inclusive societies.

“Women’s and girls’ participation in sport, for example, can boost confidence and self-esteem while challenging gender stereotypes and influencing the behaviour of men and boys.”

The World Health Organisation estimates that regular physical activity can translate to a 30% reduction in obesity, depression, and other mental health conditions, helping to prevent up to 5 million deaths a year.

Research by Made by Sport earlier this year suggested that, in the UK alone, the average Social Return on Investment (SROI) for sport for good is £6 for every £1 spent, compared to £4 for every £1 spent on sports participation.

Yet only 0.5% of Corporate Social Responsibility (CSR) activity at FTSE 100 firms in the UK supports sport for good charities.

With a £600 million reduction of investment into sport by local authorities, it’s no wonder that over 50% of UK sport for good clubs and organisations rely solely on volunteers.

There is no doubt that governments and big businesses can and should do more, but it’s not all doom and gloom.

According to Deloitte, when companies align their purpose with doing good, they can build deeper connections with their stakeholders.

This, in turn, can amplify the company’s relevance in their stakeholders’ lives.

It also found that brands that have an authentic purpose, which overlaps with CSR, grow three times faster on average than their competitors.

The International Olympic Committee says: “Making sport relevant and recognised as a key contributor of the community makes it more attractive for new members and also for government, private sector and philanthropic funding.”

This white paper showcases some of the best sport for good initiatives undertaken around the world – from a variety of organisations offering opportunities to those whose lives are being transformed by their sport for good support.

The No More Red campaign from Arsenal and Adidas was introduced in January 2022. It is a long-term programme that attempts to address the core causes of teenage violence by giving those who are most affected in the community alternative pathways through the establishment of safe places and mentorship.

It aims to inspire by showing affected youths that there are other options to violence if they concentrate on their goals and talents, and use the positive support available.

Sadly, over 750 UK youth centres have closed as a result of government budget cuts in recent years. In addition, 2021 saw the highest number of juvenile homicides in London on record as well as a persistent rise in knife crime.

Together, Arsenal and Adidas established this programme to aid in assisting the local London youth most in need.

In addition to their mentorship programmes, they contribute to the funding of new sports fields so that football may serve as a safe haven in the centre of neighbourhoods. In 2022, the first pitch was finished in Islington, and many more are in the works.

The initiative was introduced on a global stage at Arsenal’s FA Cup third-round match against Nottingham Forest, which was live on television, and helped garner support from the likes of David Beckham, the London Metropolitan Police, and even sparked a debate in Parliament.

The stark all-white Arsenal kit, which replaced the team’s traditional red, symbolised the campaign’s aspirations. The team wore the No More Red kit again in their 3-0 win over Oxford United earlier this week.

The kit will never be offered for sale; instead, it will be given to those who are actively using their creativity to forge their own future and encourage those around them to do the same.

To help them realise their goals, those people also participate in the No More Red Collective, a mentorship initiative run by Adidas and Arsenal.

Over 70 young people have been awarded the white shirt

Verona has been attending the Arsenal Hub since she was 13.

“Growing up in North London has its ups and downs,” she says. “Knife crime has been around for ages now, and we don’t know how to tackle it. Hundreds of kids are dying for no reason, just because of a postcode. It doesn’t make sense.

“I used to come to the hub – it was my kind of getaway. It was nice. You used to come to play football, link up with your friends, so in the sense, I was kind of lucky because I knew the hub was here. Whereas people that don’t know the hub exists or any type of youth club or youth centre, you link up after school because there is nothing else to do but then you stay on the roads.”

Verona left school and went to college to gain qualifications in sports science coaching. However, before the end of her studies, Verona’s teachers noticed her becoming distracted and in collaboration with Arsenal, provided her with an art tutor.

“We worked together for six weeks. He was basically teaching me new techniques, trying to make it fun but then also showing me you could actually do this as a career. That to me was a shock.

“Arsenal and Adidas basically rang me up, they wanted me to design the match-day programme. If it wasn’t for the hub I don’t even think I’d be doing this. They hooked me up with one of the local artists, Stazzy, and then two years down the line now they are telling me they want to commission me for a piece of art.

“It’s crazy to think that I’m involved and I’m part of such a big launch. The No More Red Campaign has such a strong message – it’s a good platform for me to showcase my art. I kind of want the main focus of it to be just a sense of belonging really.

“The collective is going to really allow me to continue pursuing a career in art. I’ve been kind of linked properly with Arsenal from the age of 13, so by putting two things [together] that are really important to me, which are art plus this whole community, what more could you ask for in a sense?”

Verona’s artwork appeared on the Arsenal vs Burnley matchday programme on January 22, 2022.

“The practice of sport is a human right. Every human being must have the possibility of practicing sport, without discrimination of any kind and in the Olympic Spirit, which requires mutual understanding and with a spirit of friendship, solidarity and fair play” Olympic Charter Principle 4

More than 100 million people have been forced to flee their homes across the globe and the sport community can offer so much to ensure that young displaced people can thrive through sport.

When he announced the creation of the Refugee Olympic Team, International Olympic Committee (IOC) President Thomas Bach said that it serves to “make the world better aware of the magnitude of this crisis.” The IOC Refugee Olympic Team was created ahead of the Olympic Games, Rio de Janeiro 2016, with a team of 10 athletes competing that year and a further 29 in Tokyo five years later.

Cyril Thatchett II, a member of the IOC Refugee Olympic Team in Tokyo, is a champion weightlifter who left Cameroon and sought asylum in the United Kingdom. He acknowledges that his training and ability to pursue weightlifting significantly helped his depression: “I’d thought about suicide for a long time. I just wanted to end it all. Simply taking part in sports has allowed me to stop thinking, basically.”

Cyril began studying to become a mental health nurse in order to help rehabilitate others who experienced similar trauma to himself and graduated with a first-class degree from Middlesex University.

He now works as a lead mental health nurse for the National Health Service in the UK.

Sadly, one in five people living in displacement experience mental health issues such as depression, anxiety or post traumatic stress disorder (PTSD), although many more are likely to experience some level of psychosocial distress.

The potential role of physical activity and sport is increasingly recognised as a cross cutting strategy for delivering a range of health and psychosocial interventions. However, a number of barriers and challenges remain not least because sport is too often seen as a luxury and an afterthought when compared with other needs in emerging or protracted crisis situations.

The Olympic Refuge Foundation (ORF) was launched by the IOC in 2017 as an independent non-profit organisation committed to leveraging sport for the protection, inclusion and empowerment of young people affected by displacement across the globe.

The vision of the Foundation is a society where everyone belongs and its mission is to shape a movement that ensures young people affected by displacement thrive through sport.

Game Connect is a US$1.5m ORF-funded programme in Uganda which runs from August 2020-August 2023.

Led by the AVSI Foundation in consortium with Right to Play, Youth Sport Uganda, the Uganda Olympic Committee (UOC) and United Nations High Commissioner for Refugees (UNHCR), the programme aims to improve the well-being and mental health of refugees and host community young people aged 15-24.

Depression levels have decreased by 69%

Monitoring and learning data generated by the programme highlights the following components necessary for the achievement of positive outcomes: peer and parental support, coach quality and individualised support, in addition to group activities.

The local community-rooted programme helps vulnerable young people both in and out of school by developing skills and capacities that benefit their mental health and well-being and develop new and strengthened social and support networks.

Trained coaches support 20-25 young people over a four to six-month journey of self-realisation and various structured sports activities. The play-stop and reflect cycle is repeated for all interactive sessions to enable young people to connect the issues arising in the game to those affecting them off the field of play