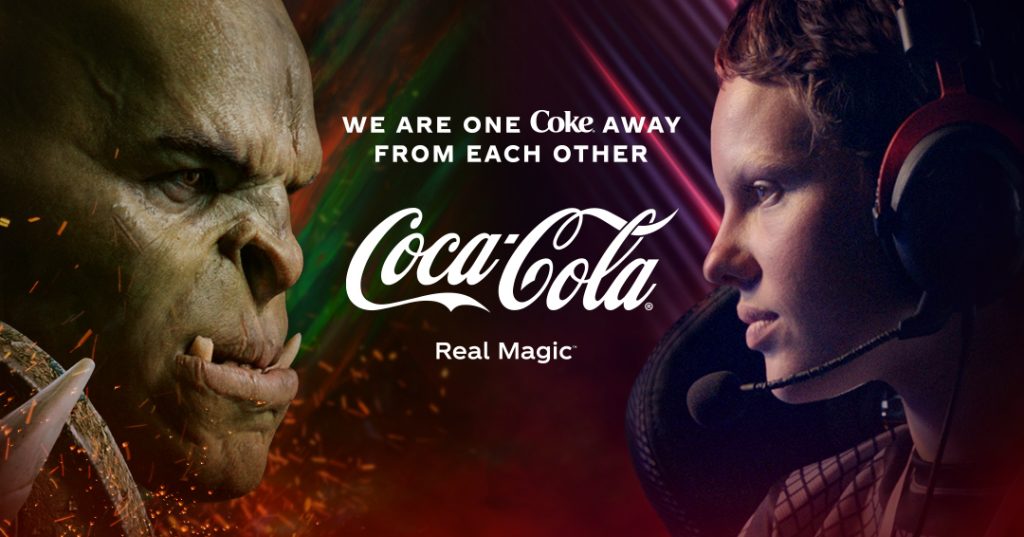 When The Real Thing Forgot To Be Real: Coke’s New Gaming Ad

In this month’s column, sports and esports advisor Tim Crow looks at why Coca-Cola’s new gaming-themed ad has riled gamers, and the lessons for outsider brands in esports.

In the esports business, brands are categorised as being either ‘endemic’ or ‘non-endemic’. When I started doing a lot of work in esports back in 2017, I disliked using those terms because they don’t convey what they really mean, which is ‘insider’ and ‘outsider’.

Endemic esports brands – gaming tech and hardware, primarily – don’t have to try to be insiders, or to be authentic. That comes naturally, because they are actually used by gamers when they are playing and competing.

“Coca-Cola isn’t a gaming insider, but it wants to be seen as one, so it was early into esports via its partnership with Riot Games back in 2013.”

Non-endemic brands have to work much harder. To be an accepted part of the scene, being seen as authentic by gamers is much, much more important than just being seen. Authenticity gives you credibility and, if you activate well, insider status. Mere intrusion – a lack of authenticity – makes you a gatecrasher.

Coca-Cola isn’t a gaming insider, but it wants to be seen as one, so it was early into esports via its partnership with Riot Games back in 2013. From there, Coke came to view gaming alongside sport, music and movies as one of its four key global consumer ‘passion points’.

Gaming being one of these is pure logic. Where Gen Z is in numbers, you’ll find Coke. Do the math: numbering 2.5 billion, Gen Z is the largest generation on earth, and a lot of them – some estimate as many as 80% – are gamers. Quite simply, recruiting Gen Z gamers into the brand is crucial to Coke’s future.

So, it wasn’t at all surprising that when Coke debuted its new global brand platform, ‘Real Magic’, earlier this month, the theme of the ad was gaming. What was surprising was that the premise of the ad, and its portrayal of gamers and gaming, was so inauthentic – as a result provoking rebuke and ridicule from one of Coke’s most important and influential audiences, passionate gamers. QED: as I write this, one in ten of those who have viewed the extended version of the ad on Coke’s YouTube channel have given it a thumbs-down, and they outnumber thumbs-up reactions by over seventeen to one – both among the highest adverse ratios I have ever seen on YouTube. There are also currently almost 5,000 comments on the ad, which are overwhelmingly negative.

All of this begs important questions as to how and why this happened, and the lessons that can be drawn for brands wanting to market to gamers. But before I get to that, let’s look at the ad and why it provoked such a strong negative reaction.

The ad tells the story of a pro gamer and his avatar, competing in an esports tournament in front of thousands of fans in a Coke-branded esports arena and watched by millions more worldwide. The gamer is losing, but after he stops playing, reaches into a mini-fridge and takes a swig of Coke, his avatar starts behaving on its own, throws down its weapon, and inspires all the other avatars to end the battle and the game. As the entire world is connected in the moment of peace, the avatar and the gamer acknowledge each other, and the ad ends with the legend ‘We are one Coke away from each other’.

Production values are high. The music is good. The involvement of gaming influencers is smart, as is the Twitch partnership and gamification. All classic Coke, but all frankly beside the point, which is that passionate gamers hated the ad. Here are the main reasons why.

But the red thread running through gamers’ rejection of the ad is above all the lack of authenticity. Spend fifteen minutes scrolling through the comments on YouTube and you’ll not only get a crash course in how gamers think, but you’ll also get one overwhelming message: that they believe this is an ad made by an outsider – a company that doesn’t understand gaming and gamers at all and that as a result is not a brand for them.

Make no mistake, this is disastrous for Coke, as the stakes are very, very high. The bigger picture here is that after a massive 12-month global restructure, this campaign is the first product of a new internal organisation and way of working: a streamlined, centralised global creative function delivering to slimmed-down operating units. As such, there is a lot of senior marketing leadership skin in this campaign, anxious to demonstrate that the new regime is working well. But when that regime’s first ad alienates such an important and influential audience as gamers, big problem.

“Someone with only a basic understanding of gaming and esports and its culture would have been able to spot the inherent problems in the premise of the ad.”

It’s hard to believe that Coke didn’t test the ad concept with gamers. Indeed, they have stated that they did. It’s even harder to believe that it did not test badly. After all, someone with only a basic understanding of gaming and esports and its culture would have been able to spot the inherent problems in the premise of the ad.

So, what happened? How did a company with eight years of involvement in gaming and esports, and which in my experience is obsessed with consumer insight, particularly across its global passion points in sport and entertainment, score such a big and avoidable own goal?

I advised Coke on its sponsorship activity for fifteen years, particularly in football, and everything we did was based on deep fan insights. At its best, this produced spectacular results. The ‘Real Football For Real Fans’ sponsorship of the English Football League for example, which I recommended to Coke and helped them negotiate and activate, was based on fan insights that led to campaigns such as ‘Club Colours’ and ‘Win A Player’ which are acknowledged to have raised the bar in football sponsorship. (They also heavily influenced Coke in Atlanta, which integrated the ‘Club Colours’ concept into its FIFA World Cup sponsorship).

“At their core of these campaigns was an absolute focus on authenticity, a determination to think and act like an insider.”

At their core of these campaigns was an absolute focus on authenticity, a determination to think and act like an insider: to ensure that above all, the most passionate Football League club fans would love the campaigns – not just like them, but love them. This wasn’t simply marketing idealism: it was hard-nosed commercial logic, because we had very strong evidence that being seen by fans as an authentic football brand – a football insider – led directly to higher brand preference and higher sales.

Fast forward to today and what I’ve learned from five years of working in esports, advising insider and outsider brands and managing Mia Stellberg, the world’s leading pro esports psychologist. And what I’ve learned above all is that for outsider brands in esports like Coke (non-endemics, if you must), marketing and behavioural authenticity isn’t simply important, it’s absolutely critical – far more than it is in traditional sports.

So if you’re an outsider brand wanting in to esports, put authenticity at the heart of your strategy, and never forget that being seen as authentic by gamers is much, much more important than just being seen. Coke ignored that, and is paying a heavy price.

Magic is one thing, but if you want to be seen as the Real Thing, don’t forget to be Real.