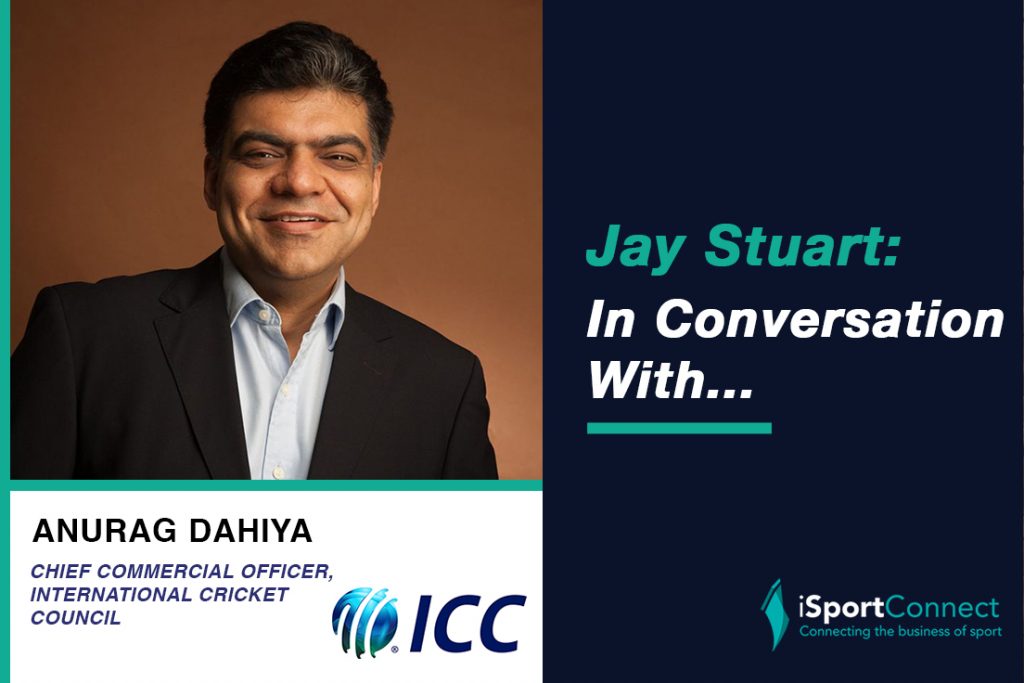 Jay Stuart talks to Anurag Dahiya, Chief Commercial Officer of the International Cricket Council, in his latest ‘In Conversation With…’

The profile of the International Cricket Council has been transformed over recent years thanks to a massive following on social media, but the attention and engagement did not happen just because of mastery of digital technology. Underlying being number on social has been a strong focus on building the brand – and that brand is not about being the world governing body of cricket.

“We are very exciting for our partners because of what we have done in connecting with our fans,” says Anurag​ Dahiya, the ICC’s Chief Commercial Officer.  “A lot of sports struggle with creating a strong connection with their brands. This is especially true of the international federations. We have worked hard on building our brand.”

The ICC’s brand-building has started with a solid foundation.

“The key to making the be-like-a-fan strategy work is having a content creation team that is strongly grounded in the values of the ICC.”

“The starting point is that we are fans of the sport. We are equal to our fans, not sitting on top of them running cricket. On social media we are not presented as a governing body or perceived that way. It is in our tone of voice. We love the sport and we want to celebrate it.”

The key to making the be-like-a-fan strategy work is having a content creation team that is strongly grounded in the values of the ICC.

“They need to be exactly aware of what we stand for,” Anurag says. “We can give them the creative freedom they need. The reality is that volume of content is so huge if we tried to check everything it would hurt us because we have to do less and that would reduce engagement. It’s a fine balance. There is such a thing as playing it too safe and being too colourless.”

The ICC’s celebration of the 2019 Cricket World Cup with a Rewind of the highlights racked up 500 million video views across all platforms. A special digital flip-book of the winning six attracted 20 million views. Numbers like that are music to the ears of the ICC’s Global Partners including Nissan, Booking.com and Emirates.

The response to the pandemic crisis has shown a digital-first strategy in action. The ICC had a successful Women’s T20 World Cup in Australia at the start of the year but then it went into shutdown mode for events. Since 2004 one of the ICC’s main off-pitch events has been the annual Player of the Year Awards. To make the event bigger and more exciting, it was decided to make the 2020 version the Player of the Decade. The ICC worked closely with its partner Indian gaming platform Dream11 (with 100 million users) to build participation. Indian broadcaster Star Sports, another core partner, aired an exclusive show devoted to the competition, and a dedicated AR filter was launched on Facebook. An amazing total of 1.5 million fans actually voted in the competition with 6 million votes tallied.

“There was amazing engagement and we enriched our data collection,” says Anurag. “So the crisis was turned into a positive in this case. Independent surveys have shown that our relative strength on social media is number one. Having a big following and strong engagement is great but we understand that the value of that has its limits, so we are focused on our data strategy. The voting mechanism on the Awards is a great tool for collecting data.”

“The emphasis will be on using digital to extend the event engagement beyond the physical location.”

For the Men’s T20 World Cup this year the ICC is working to develop really targeted communications using email and the website and app and push notification.

The upcoming World Cup will take place in a bio-bubble, the first time that the ICC has done an event that way. “The limitations will of course impact the ability of partners to activate on the ground, so the emphasis will be on using digital to extend the event engagement beyond the physical location and also to extend it in time beyond the end of play. This is something that the ICC has been working on from the start of the crisis.”

At the start of April the ICC added Himalaya MEN, an India-based company with global ambitions that is already experiencing global growth, as the Official Men’s Grooming Partner for this year’s T20 World Cup and World Test Championship Finals, and the Men’s T20 World Cup in 2022.

One of the obvious selling points of cricket is that it is by far the most important sport in India, with its 1.5 billion people. And it enjoys the same position in Pakistan and Bangladesh, two other countries among the world’s 10 largest. But that’s only part of the story.

“More and more it’s the case that our partners are coming to us to reach countries beyond the 12 Test nations.”

“More and more it’s the case that our partners are coming to us to reach countries beyond the 12 Test nations,” Anurag says. “We have 92 other member countries, and in 2019 we added 20% more players in those countries. Consider this. Five of the top 10 countries in terms of the social media following for the 2019 World Cup were not Test nations.” Those fast-emerging cricket markets will be a fundamental part of the ICC’s partner proposition for the next commercial cycle from 2023-31.

“When we look at a potential partnership the criterion we always apply is whether it will be important for cricket as well as the brand,” Anurag says. “We look for partners that want to activate in exciting ways and help build up our events and the sport. It’s not just about slapping on a logo.”

Star Sports is an ICC Official Partner alongside the likes of Coca-Cola and MoneyGram.