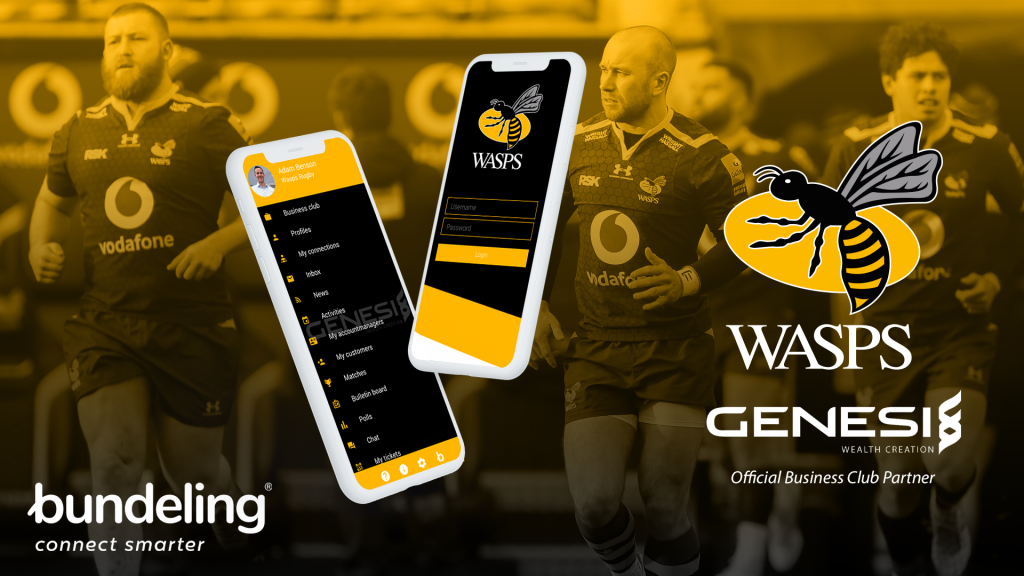 Wasps Rugby Club are delighted to announce the launch of an innovative digital business club and networking platform with the help of Bundeling.

Bundeling, headquartered in the Netherlands, focus on creating solutions to transform the way in which people come into contact with one another, how they maintain their business network and how they stay informed.

Genesis, a team of well qualified financial advisors, have been part of the Wasps family for several seasons now, initially sponsoring Wales International Bradley Davies and then supporting Thomas Young. Last season they continued their sponsorship of Thomas and agreed to support winger, Zach Kibirige. They are also loyal season ticket holders and often travel to away games to support the team.

Adam Benson, Wasps Chief Commercial Officer, explained: “This new digital offering provides a  fantastic platform for our partners to engage with the club and its many stakeholders. It is vital, particularly in the current climate, that we continue to evolve our offering for the companies we  work with. We are delighted that the team at Genesis have already seen the potential benefits of  this and agreed to become an Official Business Club Partner.”

Genesis Wealth Creation partners, Roy and Sarah Perry, said: “We are delighted to extend our relationship with Wasps by committing to a multi-year agreement as their Business Club Partner. Over the past five years, we have made many strong business connections through the club’s sponsorship programme and are looking forward to building upon this.

“We would like to thank Wasps for this opportunity to build on our strong relationship, and also the players and fans who have accepted us as part of the growing Wasps family.”

Bundeling CEO, Elroy Jansen, added: “We at Bundeling have a passion for helping clubs connect  smarter with their new and existing partners. With the signing of Wasps, we aim to bring their communication with their partners to the next level! We from Bundeling wish Wasps a successful season and are looking forward to this great partnership. We’re thankful to iSPORTCONNECT for helping to facilitate the creation of this deal, our first with a major rugby club in the UK, and we look forward to creating more deals and helping to benefit more organisations within the sports industry.”

Ray James, iSPORTCONNECT’s Chief Relationship Officer, stated: “We’re delighted to be able to play a part in this new partnership, by utilising our industry relationships we believed there could be synergies between Bundeling and Wasps. From our own knowledge of having a digital community, we know the benefits a platform such as Bundeling can bring to an organisation.”