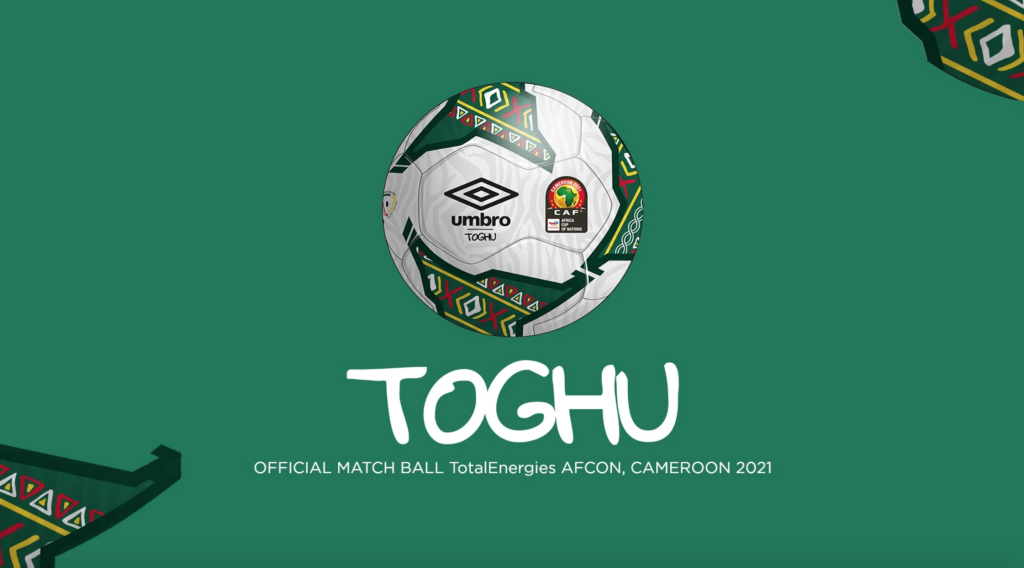 The comprehensive partnership will see the iconic sports brand become the exclusive technical sponsor for CAF organized tournaments and events. The partnership will commence in January 2022, where Umbro will kit all referees, volunteers, and associated personnel for the TotalEnergies Africa Cup of Nations Cameroon 2021; in addition to supplying the tournament’s official ball.

Named after host country Cameroon’s traditional outfits, the official ‘Toghu’ match ball features vibrantly coloured panels inspired by the finely embroidered designs of the cultural garments. Fans will be able to purchase the official replica ball as part of a limited-edition collectible range created for the tournament, which will be available online through Umbro South Africa, CAF Online and Geronimo Africa.

“This is a proud moment for Umbro in Africa and demonstrates our commitment to the development of football on the continent at all levels, from amateur grassroots to the grandstands of the professional game. The intentions of our team are clear; we are here to work and support African football for the long-term,” said Byron Mulholland, Director at Umbro South Africa.

“For a very long time, we have contributed to the building of African football, and we are excited to continue this work in association with the continent’s organizing body, CAF. We are honoured to have the double diamond featured on Africa’s greatest football stage once again and look forward to replicating this at all CAF events, including the upcoming Pan-Africa Schools Football Championship.”

CAF General Secretary Veron Mosengo-Omba said: “Umbro has been an intrinsic part of African football for a long period, and we are pleased to finally formalise this relationship and ensure that we take this to another level. This CAF, ably led by President Patrice Motsepe, is building a strong rapport with the commercial world and Umbro’s partnership further demonstrates this. With ‘Toghu’ now an official match ball, we hope that this ball can create many lasting memories after the final whistle of the TotalEnergies Africa Cup of Nations.”

In addition to technical sponsorship and the provision of official uniforms for tournament personnel, the partnership will be focused and driven by a strong emphasis on increasing the visibility and commercial aspects of African football. As such, amongst other planned initiatives, CAF and Umbro will introduce a landmark football news aggregation app, powered by Geronimo for teams and their fans across Africa.

“The credible and holistic support of African football underscores every element of this partnership”, added Kirby Stein, Umbro South Africa’s Team Liaison Manager. “Our goal is to continue to support federations and teams across the African continent and together with CAF, we’ve planned some exciting commercial initiatives for our partnered teams to further enable their digital and commercial strategies.”