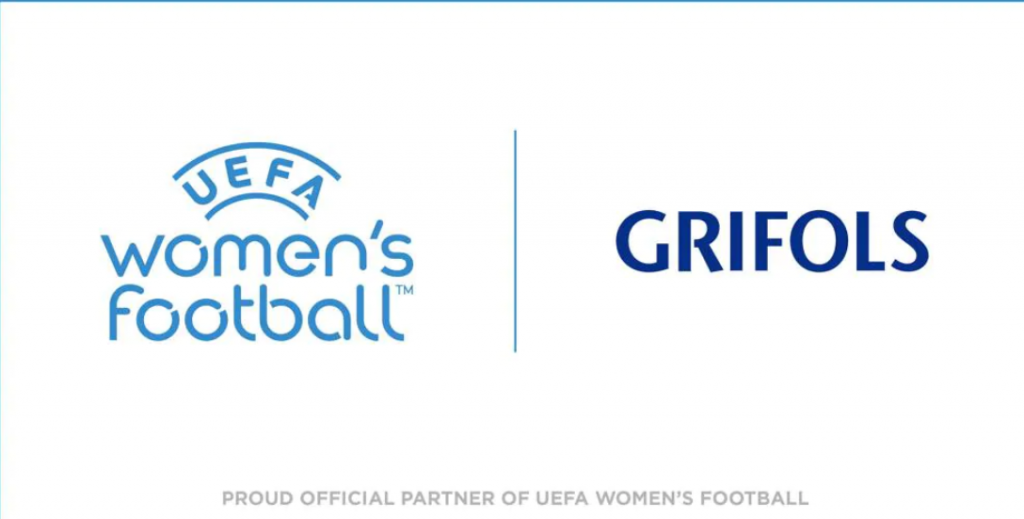 Grifols , a leading global producer of plasma-derived medicines with a history of more than 110 years contributing to improve the health and well-being of people has become an official partner of the Union of European Football Associations’ (UEFA) Women’s Football beginning with the 2021/22 season and until the end of the 2025 competitions.

Under the four-season partnership, Grifols becomes the exclusive healthcare company partner of women’s football at all tournament levels, including the UEFA Women’s Champions League, the UEFA Women’s Euro, the UEFA Women’s Under-19 and Under-17 Championships, and the UEFA Women’s Futsal EURO, as well as UEFA’s Together #WePlayStrong initiative, which aims to encourage more girls and women to play football.

Women account for 60% of the workforce at Grifols, which in early 2021 was included in the Bloomberg Gender-Equality Index for its commitment to the advancement of women in the workplace.

“Sport is one of the most powerful platforms for promoting gender equality. It develops skills and qualities that inspire girls and empower women in the workplace and in all areas of community life,” said Teresa Rione, Grifols Chief Communications Officer and former Olympic athlete.

“Grifols is extremely proud to support UEFA’s Women’s Football and contribute to building the foundations for a more equal and sustainable future,” said Raimon Grifols, co-CEO of Grifols.

For years the company has supported a range of women’s sports as part of its sponsorship of local social initiatives, including volleyball and field hockey.

“Our partnership with UEFA is exciting for our employees and for all of Grifols,” added Víctor Grifols Deu, co-CEO of Grifols. “We’re looking forward to watching thrilling matches.”

As part of its agreement, Grifols will be able to undertake multiple branding and promotional activities across its own internal and external channels as well as UEFA properties. Activations could include in-stadium fixed and rotating LED boards, matchday and on-site promotions, premium giveaways, hospitality and digital actions on social media platforms.

The beginning of the Grifols-UEFA partnership comes as women’s football continues to grow in popularity and reach across Europe, with a participation growth rate quadruple that of the men’s game, according to UEFA. Starting with the 2021/22 season, UEFA Women’s Champions League is introducing a new format, including a 16-team group stage, resulting in a 20% increase in the number of matches as well as more competitive games and increased visibility.

“We are delighted to welcome Grifols to our exclusive family of UEFA Women’s Football partners,” said Guy Laurent-Epstein, UEFA Marketing Director. “We’re ready for even greater excitement and action on the pitch as women’s football reaches new levels.”

“This is such an exciting time to be part of UEFA Women’s Football as our game is developing at such a tempo and we are delighted to welcome Grifols on this exciting journey with us,” said Nadine Kessler, UEFA’s chief of women’s football.

“For years Grifols has demonstrated its commitment to women’s sport as part of its sponsorship of local social initiatives, including volleyball and field hockey. Therefore, we believe they are the perfect partner to be joining us and we are looking forward to closely working with them over the upcoming seasons.”