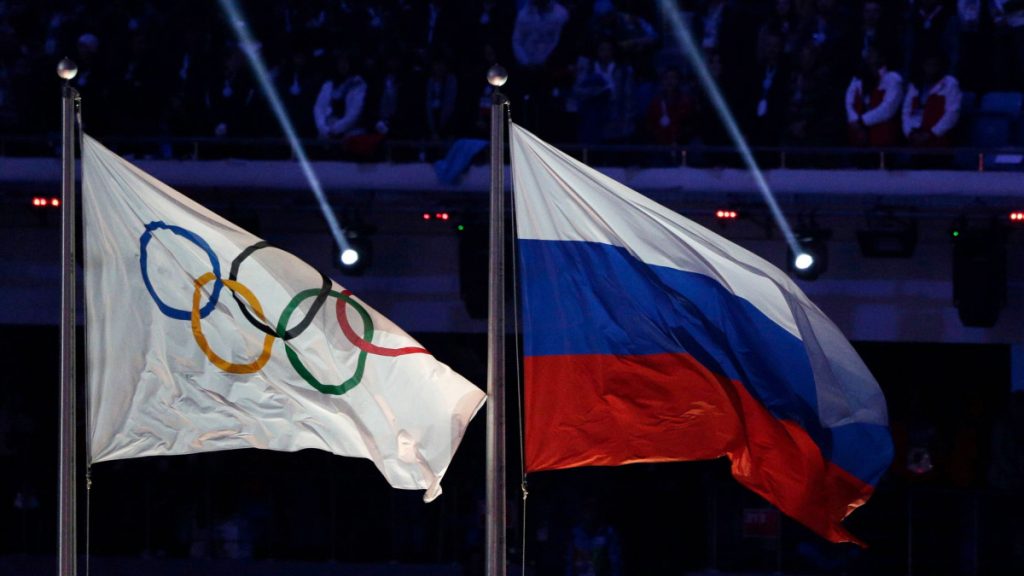 Olympic Games advisor Michael Pirrie examines the geopolitics of sporting sanctions against Russia and links to the Beijing Games, and evaluates the important role that sport must play in the growing global unrest.

The shockwaves from Russia’s relentless invasion of Ukraine continue to radiate across the world, with sanctions in finance spreading to other sectors including sport.

These began at the epicentre in Ukraine as a group of international football stars and families sought to evacuate the heavily bombarded city where they had played in the Champion’s League just weeks before the invasion. The foreign players, contracted to Ukrainian clubs Shakhtar Donetsk and Dynamo Kyiv, were facing severe difficulties following the invasion.

For the second time in six months, sporting bodies and federations are working with international agencies and embassies to mount another rescue operation for stranded sports teams and athletes, following the takeover in Afghanistan by the Taliban after the exit of US and British troops.

These tensions were heightened at the recent Beijing Winter Olympic Games as the hard-line Chinese government attempted to impress the world amid criticism of its human rights record.

Sporting bodies are scrambling to respond to the Russian invasion in ways that reflect the gravity of the situation as well as sport’s position of influence in international society. Pressure is growing by the day as devastating images of the Russian invasion galvanise the international community. This has prompted an international outcry by sporting leaders as well as a global coalition of human rights groups, peace and pro-democracy organizations, governments and non-government bodies.

“It is now up to world governing bodies and federations develop more formal positions with member nations, leagues and stakeholders.”

The scale of human suffering that Russia has inflicted is looming as an unprecedented test of sport’s capacity to respond meaningfully to the Ukraine crisis. While a growing number of EU countries have shut down air space to Russian jets, sporting bodies are shutting down venues and events and boycotting Russia.

It is now up to world governing bodies and federations develop more formal positions with member nations, leagues and stakeholders, it will be important their plans also reflect the values of athletes and wider international society in which sport exists.

The initial approach has been to abandon and relocate events and competitions currently scheduled in Russia. The Ski Federation of Norway, which topped the medal table in Beijing recently, has warned Russia against hosting skiing events.

“Sport is not detached from this and cannot remain passive to what is happening now,” the federation said in a statement. “The Norwegian Ski Federation’s message to Russia and Russian athletes is crystal we do not want your participation.”

In other developments, the International Judo Federation has cancelled Putin’s honorary president and ambassador positions, while FINA has cancelled upcoming events in Russia and the football association of the Czech Republic has followed Sweden and Poland in refusing to play Russia in a Fifa world cup playoff, amongst a mounting list of sporting boycotts of Russia.

This followed a swift response by the IOC, requesting international federations to move events scheduled for Russia or Belarus out of the countries, which has subsequently been upgraded to a recommendation that no Russian or Belarussian athletes take part in sporting events.

The Russian invasion, which was preceded by weeks of military build up on the border with Ukraine, was overshadowed – and delayed – by the Beijing Games. It could also change perceptions of the Games as a prelude to war. This is thought to have been a concession to Putin’s Chinese counterpart Xi, for whom the success of the Games was a high re-election priority.

The Russian leader is believed to have observed Russian military exercises bordering Ukraine while also watching his beloved Russian ice hockey team fight for gold in Beijing before ultimately going down to Finland in a shock defeat.

Putin’s delayed invasion gave his Russian Olympic Committee team time to return home along with thousands of athletes across Europe. The Russian invasion could have the most dramatic impact on Europe since it was devastated by the second world war.

While the 1948 London Olympic Games took the world from war to sport, the Beijing Games by contrast could have served as a prelude to war.

“While this placed extraordinary strain on the Games atmosphere, the core Olympic mission survived pandemic and political pressures.”

Just as the star of London’s post war Games was the brilliant Dutch housewife Fanny Blankers-Koen, who won 4 gold medals, female athletes dominated the storylines that will linger from Beijing:

The politics that surrounded the Beijing Games also challenged sport’s neutrality. China’s Communist Party had a central focus on total pandemic and political control, which chipped away at traditional Olympic freedoms and values.

Like the ‘Bridge Over Troubled Water’ soundtrack that filled the Beijing National Indoor Stadium for figure skating routines, in this instance it was the athletes who crossed the bridge.

The athletes revealed deeper meaning and purpose to worldwide audiences, beyond the super politics. Competitors from across the planet gave performances that provided inspiration for audiences looking for signs of unity in world unrest.

Peggy Noonan, speechwriter to late US President Ronald Reagan, once observed that “the bravest things we do in our lives are really know only to ourselves.”

If so, the Olympic Games displayed, magnified and brought that bravery to world attention.

A TRIUMPH OF THE HUMAN SPIRIT

No-one showed more valour than young Georgian luger Saba Kumaritashvili, who exemplified the Olympic spirit like few before him. He delivered on an unprecedented promise to compete at the Winter Games on behalf of his cousin, Nodar Kumaritashvili, who was fatally injured at training on the eve of the Vancouver Winter Olympics.

Saba carried Nodar’s Olympic hopes with him to Beijing, delivering the Olympic dream his cousin started but never finished 12 years earlier. In doing so, Saba transformed enormous tragedy into a triumph. This was possibly the most dramatic and unexpected story of China’s Games.

“Hurtling down the Yanqing National Sliding Centre on his sled in one of the fastest and most dangerous sports, Saba fulfilled Nodar’s ambition to represent his family and nation at the Olympic Games.”

Hurtling down the Yanqing National Sliding Centre on his sled in one of the fastest and most dangerous sports, Saba fulfilled Nodar’s ambition to represent his family and nation at the Olympic Games.

“I think every sportsman’s goal and dream is to be competing at the Olympic Games…,” Saba said. “Thinking about my cousin is painful but gives me strength,” Saba told reporters after completing one of his runs.

“Every generation of our family had at least one luge sportsman, and now my father and are continuing this tradition and following in Nodar’s footsteps.”

OLYMPIC TIME TRAVELLER – A GAMES FOR THE AGES

US snowboarder Lindsey Jacobellis was an Olympic time traveller who displayed uncommon courage, turning a haunting error from her Olympic past into a gold medal 16 years later in Beijing.

This was a remarkable journey of redemption and perseverance that exemplified the Olympic spirit.

After a last minute swerve robbed her of first place on the podium at Turino in 2006, Jacobellis finally secured Olympic gold at her fifth Games attempt.

The athletes are the Games and the common humanity of athletes from different nations and cultures helps to connect the world. This is why highlighting injustices and human rights were so prominent at the Beijing Games.

It is also why the Olympic dynamic has been evolving since Simone Biles made mental health a priority at the Tokyo Games. The growing focus on character and personal circumstances of athletes crossed Olympic seasons in Beijing.

“The transition from super hero to human embodied by Biles and Shiffrin is changing perceptions of Olympic success and role models.”

Athletes such as US ski champion Mikael Shiffrin are inspiring through their humanity without winning gold medals.   Shiffrin, 26, demonstrated extraordinary grace under pressure, expected to win several medals, she walked away with none and was unbowed.

The transition from super hero to human embodied by Biles and Shiffrin is changing perceptions of Olympic success and role models. Shiffrin’s resilience in the face of heart-breaking, unexplainable defeat, was relatable and inspirational. She pointed to the lingering impact of her father’s sudden death two years ago.

“Right now I would really like to call him,” Shiffrin said without disguising the raw emotional grief she still harbours. “He would probably tell me to get over it. But he’s not here to say that…” the former defending Olympic champion said disarmingly.

Beijing’s uncompromising virus elimination blueprint involving extensive testing and quarantine was too extreme for some athletes who were overwhelmed by the isolation conditions and limited time to train and prepare for competition.

This prompted rapid improvements in facilities and food for athletes in quarantine and on the slopes – essential to covering gaps in planning that threatened the critical first impressions of the Games, especially in the international media.

The IOC president Thomas Bach was right when he stated in the Opening Ceremony that athletes give peace a chance – or at least a profile, even in China’s politically charged environment and Russia’s war on Ukraine. Athletes have used international sporting platforms since the invasion to place a spotlight on the atrocities and other urgent situations confronting the world.

“No war please,” rising Russian tennis star Andrey Rublev scrawled across a broadcast camera after his weekend win at the Dubai Tennis Championships. “You realise how important it is to have peace in the world and to respect each other no matter what and to be united,” he said later.

Rublev’s plea for peace echoed that of the Ukrainian winter olympian who risked the wrath of officials and placed his Olympic future and career in jeopardy by boldly holding up a “No War In Ukraine” message to the world in Beijing after his event, just as war was coming to his European homeland.

In today’s fragile world, where the IOC president said “division, conflict, and mistrust are on the rise”, the pipeline of host cities chosen on Bach’s watch – Paris, Milan-Cortina, Los Angeles and Brisbane – will be more important than could have been imagined as stable environments for the Games in the turbulence facing world affairs in decade ahead may be necessary.

As Putin holds the world to ransom, raising the nuclear alert system, the world’s leading governing bodies including IOC and FIFA will come under growing pressure to push the nuclear button in sport and ban Russia entirely from the Olympic Games and Fifa World Cup.

Michael Pirrie is an international major events and Olympic Games communications advisor and commentator who was Executive Advisor to Seb Coe and the London Olympic Committee.