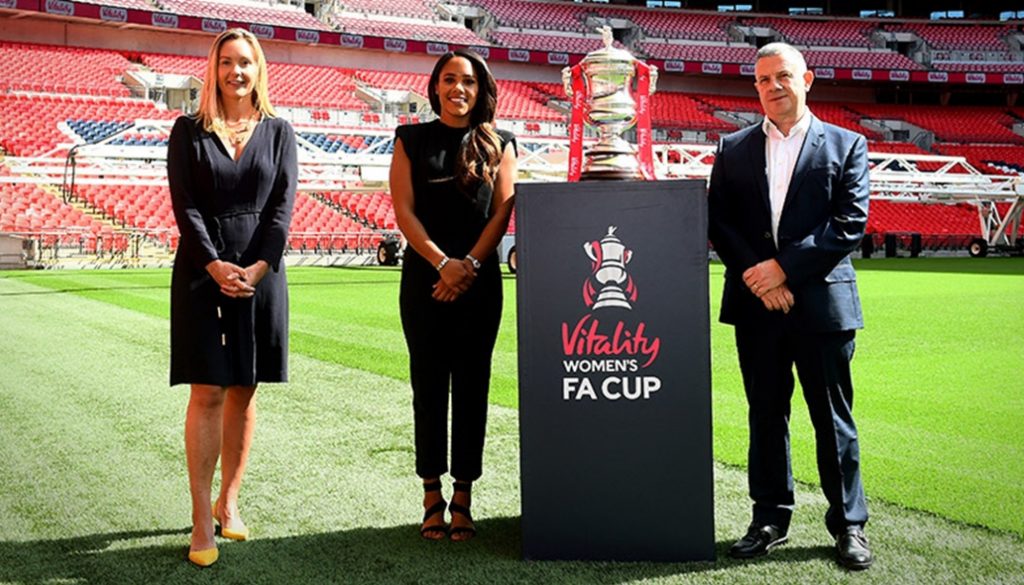 The Football Association have announced Vitality as the new sponsor of the Women’s FA Cup.

The new partnership, which will run for three years through to July 2023, will see the world’s best women’s cup competition rebranded and referred to as the Vitality Women’s FA Cup. The relationship officially kicks-off from the start of the quarter finals of the 2019-20 competition, which take place on 26-27 September.

A peak audience of 2.2m watched Manchester City defeat West Ham United in the 2019 Final of the competition, with over 43,000 in attendance at Wembley Stadium.

The announcement reflects Vitality’s continued commitment to women’s sport and to addressing the significant difference that exists in physical activity levels between men and women*.

Working together with us, Vitality will help drive visibility of women’s football and inspire many more girls and women to take up football or other sports and to keep and stay active, in line with its core purpose – to make people healthier and to enhance and protect their lives.

Kelly Simmons, our director of the women’s professional game, welcomed the news of the new partnership.

“I’m delighted that a recognised brand such as Vitality has signed up to partner with us and sponsor such a prestigious competition as the Women’s FA Cup,” she said.

“We recognise that during a very difficult time for everyone, this is a big commitment that Vitality has made in becoming primary sponsor of the Women’s FA Cup, and I’m really looking forward to working with them as we look to grow the competition.

“This partnership not only highlights the affection that so many have for the Women’s FA Cup, but it also demonstrates the growing interest in the women’s game, which is something I know Vitality is keen to develop alongside us.”

Nick Read, managing director for Vitality, added: “We’re incredibly excited to be announcing this new partnership with the FA today.

“We’ve been involved in both football and supporting women’s sport for many years, and today’s announcement highlights our commitment to the women’s game.

“There’s never been a more important time to be involved in women’s football, and by working with the FA we hope to drive visibility of the women team, showcasing this great sport and encouraging millions more people get active and play football, in line with our core purpose to make people healthier and enhance and protect their lives.”

This week, Vitality also announced former England footballer Alex Scott as a new ambassador for the brand and speaking about their sponsorship of the Vitality Women’s FA Cup, she said: “This announcement today is great news for the sport and profile of women’s football.

“I’m pleased to be joining a brand that is shining a light on the game and driving visibility of the women’s game and hopefully inspiring many more women and girls to take up football, or whatever other activity might be right for them.”