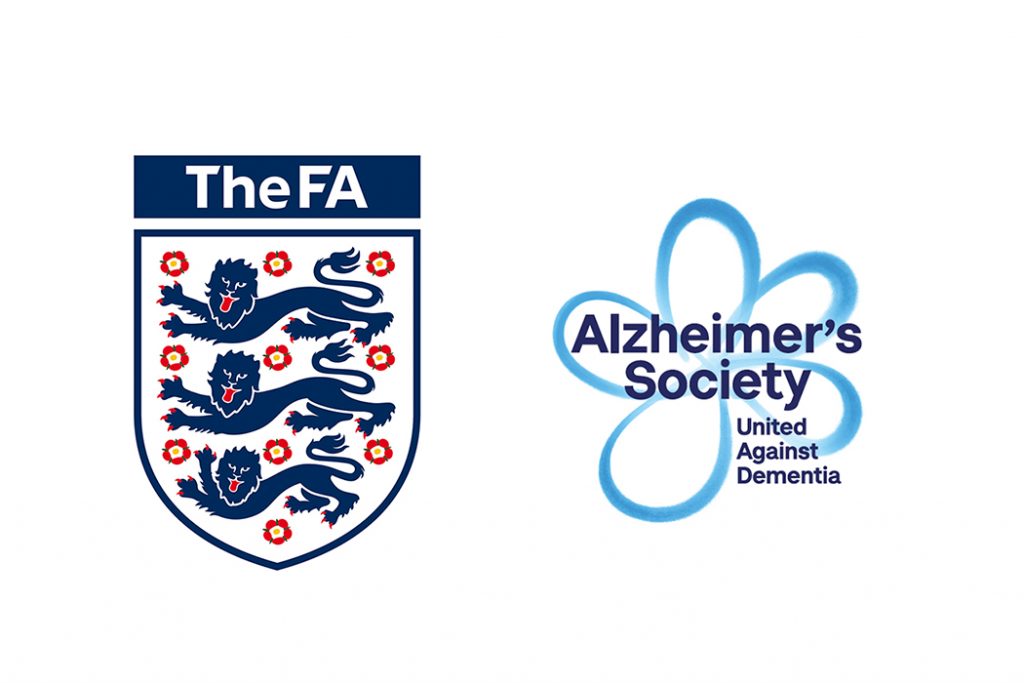 The FA and Alzheimer’s Society want to ensure that more people from the football community are  aware of dementia, come forward for available support and are provided with the help that they need.

Over the next two years, the partnership will:

• Raise awareness of dementia and the support services Alzheimer’s Society offers to help bring dementia out of the shadows and end the stigma faced by all those who it affects;

• Show how clubs can be more dementia friendly by ensuring that stadiums and grounds are  accessible, staff understand the difficulties people encounter and people can enjoy watching  football for longer;

• Enable local football clubs and The FA to refer their employees, players, former players and  fans to Alzheimer’s Society’s support services so they can access the help that they need; • Offer The FA’s employees an opportunity to become a Dementia Friend and volunteer for  Alzheimer’s Society by helping people with dementia to keep connected over the phone;

• Provide The FA with access to leading scientists and research expertise to understand more  about dementia causes and risk factors.

The new partnership will officially launch at The FA Community Shield supported by McDonald’s on  Saturday 7 August 2021, with activations across The FA’s channels, matchday programme, Wembley  Stadium connected by EE’s digital screens and ITV as its new host broadcasters from this season.

Alzheimer’s Society was appointed as the official charity partner of The FA following an open  application process that began in March 2021. Several charities were shortlisted and subsequently  submitted presentations that were voted on by The FA’s employees and the England national teams.

England players will support and be an active part of the charity partnership, including donating a  significant sum to the charity from their match fees. An international fixture will be dedicated to Alzheimer’s Society during the partnership and The FA will match any players’ contributions through  funds raised from the Community Shield, as well as employee and external fundraising.

Edleen John, Director of International Relations, Corporate Affairs and Co-Partner for Equality, Diversity and Inclusion, said: “We were really pleased to present our employees and players with an  excellent range of charities that were committed to using the power of football as a force for good.  We wanted our teams and staff to have a voice in our charity partner selection,so we gave them an opportunity to vote for the one that they are personally and professionally passionate about alongside  recognising our organisation’sstrategic objectives.

“Alzheimer’s Society is a fantastic headline charity partner choice. With further research, early  treatment and support, many people with dementia will be able to lead full and active lives. Together,  we hope to make a significant difference to all those impacted by dementia and to ensure that the  football community is aware of the signs, advice available and can access support when they need it.”

Kate Lee, Chief Executive at Alzheimer’s Society added: “It’s been brilliant for all of us to enjoy an  incredible few weeks of football after the year we’ve all had. For so many fans and former players  living with dementia, that passion and common interest is their form of escapism after a diagnosis.  Our partnership with The FA is a huge step in changing how people experience dementia within the  sporting industry and couldn’t have come sooner.

“Following a catastrophic time for people with dementia, this is a massive opportunity to help support  those who have never needed it more. Together, we can help ensure that the millions of football  supporters and their families know our services are here, change how fans and players receive support  and create a dementia inclusive industry, so people with dementia can continue to remain part of the  game. Together, we can showcase the power of football to change lives for the better.”