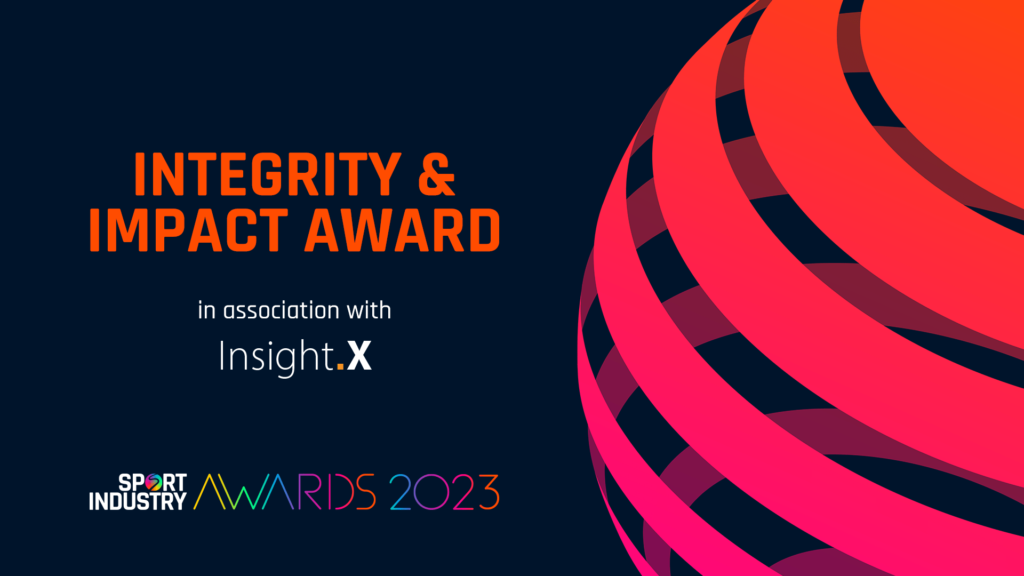 The Sport Industry Awards 2023 has announced that nominations for the Integrity & Impact Award in association with InsightX are now open.

The Integrity & Impact Award in association with InsightX recognises individuals or organisations that have demonstrated outstanding levels of ethics, integrity or trust in sport and helped to set a global standard for best practice in sport governance and business.

On opening nominations for the Integrity & Impact Award, InsightX CEO, Sophie Elsworthy, said, “It’s wonderful to be partnering with Sport Industry Group for such an important award.

“Current events mean that integrity in sport has never been more important so we are very much looking forward to seeing who the next worthy recipient of this award will be.

“Once again, we’d like to acknowledge this award’s co-founder and our former colleague, the late Simon Greenberg. Integrity in sport was of great importance to him and as we seek the next award recipient he remains at the forefront of our minds.”

The award, now in its sixth consecutive year, will be presented at the Sport Industry Awards 2023 on Thursday 27th April at Evolution London.

In 2022, it was awarded to Athlead Founder and CEO, Kat Craig, by Baroness Tanni Grey-Thompson. The human rights lawyer accepted the award on behalf of a number of individuals and organisations who were instrumental in the evacuation of the Afghan Women’s National football team and other vulnerable female athletes from Kabul, Afghanistan.

In 2021, the award was given to Marcus Rashford, for the remarkable work he has done – both on and off the pitch – in fighting for those less fortunate, less represented, and less heard in society.

In 2020, US international footballer and social activist Megan Rapinoe received the award, honouring the work she did in highlighting racial and discriminatory divisions in the United States throughout 2019 and 2020.

In 2019, Manchester City and England footballer Raheem Sterling was presented the award by his national team manager Gareth Southgate. The award recognised Sterling’s campaigning against racism within football, and the media’s role in discrimination within the sport.

In 2018, US gymnast-turned-lawyer Rachel Denhollander was rewarded for her courage and determination in speaking up as a survivor of the abuse of Larry Nasser, picking up the inaugural award.

Sport Industry Group and InsightX are now officially inviting members of the public to put forward nominations for this year’s Integrity & Impact Award. Nominations can be made here.