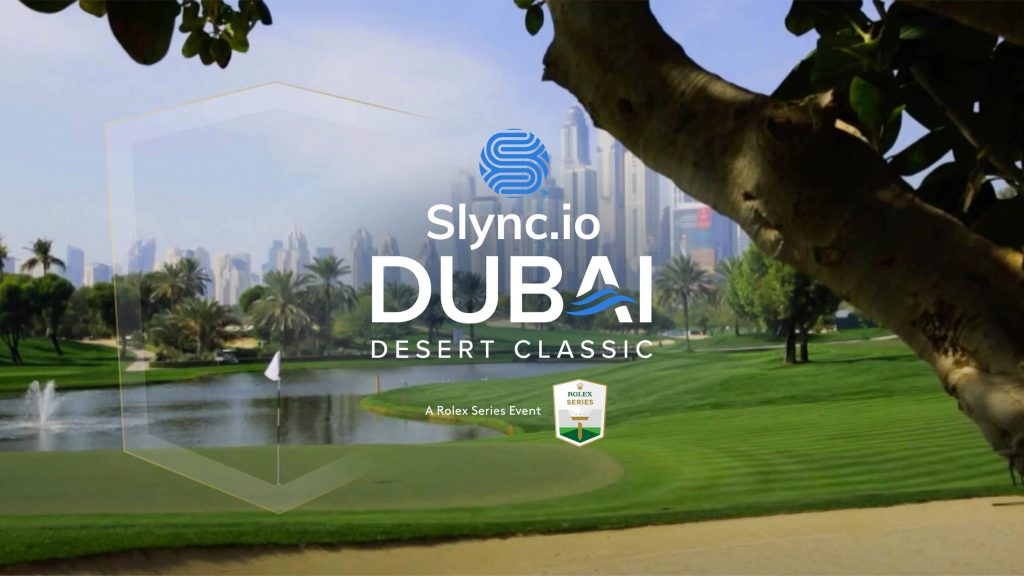 The European Tour today announced Slync.io as the new title sponsor of the Dubai Desert Classic, with the iconic event becoming part of the Rolex Series for the first time in 2022.

Slync.io, the technology provider that is revolutionising the way global logistics works, becomes the title sponsor of the historic European Tour event played annually at the prestigious Emirates Golf Club, marking a pivotal moment in the 32-year history of the tournament.

From 2022, the Slync.io Dubai Desert Classic will be part of the Rolex Series, the European Tour’s premium category of events, with a prize fund of $8million. It will take place from January 27-30.

This means the European Tour will now have back-to-back Rolex Series events in the Middle East in January with the tournaments in Abu Dhabi and Dubai part of the traditional ‘Desert Swing’ which attracts golf’s leading players.

The Dubai Desert Classic was the European Tour’s first event in the Middle East region in 1989, cementing the Tour’s relationship with Dubai and the United Arab Emirates. That association has developed significantly in the intervening years, including through the introduction in 2009 of the European Tour’s season-long Race to Dubai, which from 2022 will now feature three out of five Rolex Series events in the Middle East, with the back-to-back tournaments in Abu Dhabi and Dubai at the start of the calendar year joined by the season-ending DP World Tour Championship, Dubai in November.

The tournament is set for an even brighter future with the support of Slync.io, which already has a strong foothold in professional golf through its support of its #TeamSlync Brand Ambassadors. They include: Justin Rose, Viktor Hovland, Erik van Rooyen, Jennifer Kupcho, Bernd Wiesberger, Sepp Straka, Albane Valenzuela, and Xinjin Zhang.

Chris Kirchner, Founder, Chairman and CEO of Slync.io, said: “We are excited to partner with the European Tour and Rolex on the Dubai Desert Classic. Dubai is one of the great cities and a key player in global logistics. This event will be a great place for us to kick off our year with our customers and enjoy some world-class golf.”

Simon Corkill, Executive Tournament Director – Slync.io Dubai Desert Classic, said: “This is a very exciting time for the Desert Classic as we welcome Slync.io as title partner. Slync’s status as a leading global logistics technology provider will help to bring innovative ideas to the tournament and ensure it continues to evolve and grow.”

“These changes will bring a host of benefits to Dubai and the tournament, in addition to offering our international fans enhanced coverage of the venue and players.”

“We look forward to working with Slync.io and the rest of our sponsors to deliver a world-class event during a pivotal year for Dubai, when all eyes will descend on the city during the UAE’s 50th anniversary celebrations and the landmark hosting of Expo 2020 Dubai.”

Keith Pelley, the European Tour’s Chief Executive, said: “We are delighted to welcome Slync.io as the new title sponsor of the Dubai Desert Classic, elevating the tournament to a new level.”

“It is a real statement of intent that Slync’s first title sponsorship in golf will be as part of the Rolex Series, and we look forward to working together to build on the incredible history of the Dubai Desert Classic and to continue to showcase Dubai as a global sporting and trade hub.”

“Alongside the Genesis Scottish Open and the BMW PGA Championship, the three Rolex Series events in the Middle East mean our five premium tournaments in 2022 will be played at key times in the golfing calendar when the eyes of the world are on the European Tour.”

“They will be incredible highlights in what promises to be a momentous 50th anniversary season for the European Tour.”