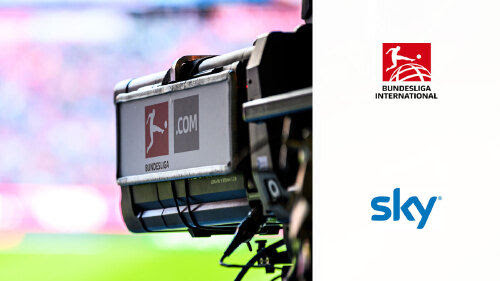 Bundesliga International and SKY Mexico have agreed a four-year extension, ensuring that Mexico’s leading subscription-TV service remains the go-to place for Bundesliga and Bundesliga 2 coverage in Mexico and Central America.

The deal, which will officially begin at the start of the 2022-23 season, gives SKY Mexico exclusive rights to all Bundesliga and Bundesliga 2 matches, as well as the German Supercup and the relegation play-offs in Mexico, as well as in Costa Rica, El Salvador, Guatemala, Honduras, Nicaragua, Panama and non-exclusively in the Dominican Republic.

It also includes a range of broadcasting commitments from both sides, as well as implementing a compelling distribution strategy that utilises both Sky Mexico’s well-established channels and new platforms. Additionally, both parties will explore opportunities to further increase reach and awareness of the Bundesliga in the market.

The Bundesliga has experienced tremendous growth with regard to live viewing figures in recent years. Industry research also highlights the Bundesliga as the fastest growing European league in Mexico, in terms of awareness and interest over the last two seasons. Social media engagement has also continued to climb; Mexico is currently the Bundesliga’s third-biggest market in terms of reach on its owned and operated content channels.

Bundesliga International CEO Robert Klein: “The rapid growth of the Bundesliga in Mexico and Central America highlights not only that our league is one of the most exciting in the world, but that our partnership strategy is the right one. SKY Mexico is one of the most popular pay-TV providers in the region, and we are working closely with them to deliver engaging, localised, and most importantly relevant content to fans. This includes the adoption of some of our most innovative features, such as Star Cam and the Tactical Feed, as well as working together to promote the Bundesliga outside of the on-air experience. As we extend this partnership, I can only see this relationship getting stronger.”

SKY Mexico CCPO Juan Carlos Muñoz: “We are more than glad to extend our solid partnership and to reinforce the commitment of high quality, top level international competitions available for our subscribers. SKY has been and will continue to be the best and most complete sports offering in the market, providing a variety of exclusive events live and definitely all the excitement of Bundesliga competitions”

Bundesliga International will also continue to reach football fans throughout Mexico and Central America by expanding its network of content partners and cross-digital platforms, to deliver localised highlights, news and information on the stories that matter from across the Bundesliga.

Earlier this month, the DFL signed a Memorandum of Understanding with the Liga MX, the professional sector of Federación Mexicana De Fútbol Asociación A.C. (FMF). The new broadcasting deal also comes the day after Bundesliga club Bayer 04 Leverkusen played Toluca FC in Mexico. Furthermore, the DFL has reaffirmed its commitment to supporting grassroots football by refurbishing football pitches all over the world, including in Mexico City. The DFL and Sky Mexico will work together on the project to ensure that the current and future generations of football fans have the opportunity to play.