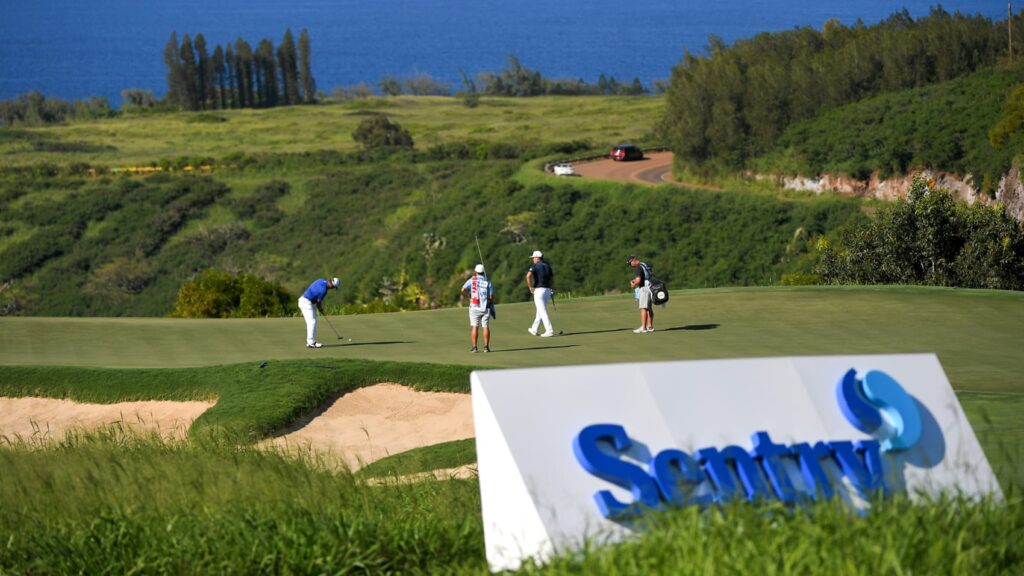 Sentry extends title sponsorship of Tournament of Champions until 2035

The PGA TOUR and Sentry Insurance, which has served as title sponsor of the Sentry Tournament of Champions since 2018, announced today a sponsorship extension through 2035. The new term further extends a 10-year partnership, announced in January of 2020.

Kicking off the 2023 portion of the season, the Sentry Tournament of Champions held at The Plantation Course at Kapalua (January 2-8) will feature a purse of $15 million, up from $8.2 million in 2022. The event will lead off 2024 when the TOUR transitions to a calendar-year season.

“Today’s announcement of support through 2035 further solidifies the tremendous efforts Sentry Insurance has made in enhancing this event since 2018,” said PGA TOUR Commissioner Jay Monahan. “Kicking off the PGA TOUR season at the Sentry Tournament of Champions starting in 2024 will further elevate the event as the world of golf will be squarely focused on Maui that week. Our thanks to Pete McPartland and his team at Sentry for their partnership, loyalty and trust in the PGA TOUR.”

The Sentry Tournament of Champions field includes all winners of official PGA TOUR events in the preceding calendar year, and beginning in 2023, will also include the top 30 players from the FedExCup Playoffs Points List who qualify for the TOUR Championship in recognition of the outstanding performance required throughout the FedExCup Season to advance to East Lake. The Sentry Tournament of Champions joins a select list of events that the top 30 players who qualify for the TOUR Championship earn exemptions into including the Masters Tournament, PGA Championship, U.S. Open, Genesis Scottish Open and Open Championship. Scott Stallings, Cameron Young, Collin Morikawa, Corey Conners, Brian Harman, Sahith Theegala, Adam Scott and Aaron Wise will be exempt for the 2023 tournament as a result of the new criteria.

The original agreement in 2018 represented the first major sports sponsorship for Sentry, one of the largest business-focused mutual insurance companies in the United States. The company has been involved with golf since 1982 when it built SentryWorld – Wisconsin’s first destination golf facility at its headquarters in Stevens Point – which played host to the 2019 U.S. Girls Junior and will be the site for the U.S. Senior Open in 2023.

“One of the smartest decisions we’ve ever made was to align ourselves with the PGA TOUR,” said Pete McPartland, Sentry’s Chairman of the Board, President and CEO. “It’s been a great relationship—one that has helped us connect with our customers and other business decision makers who watch and play the game. We have established something very special with the Sentry Tournament of Champions, and we’re excited about what the future holds for both the PGA TOUR and our event. We’ll continue to work with the TOUR on elevating our championship in ways that will benefit the game and the island of Maui, which we consider our second home.”

Since becoming title sponsor, Sentry has fully engaged the Maui community and has extended its community outreach well beyond tournament week. This includes creating a scholarship program for graduates of Maui Public Schools, providing support to the Maui United Way for COVID-19 pandemic relief efforts and to help address childhood hunger in Maui County, and spearheading an initiative that connects similar organizations on Maui and in Stevens Point in the areas of community service, arts, education and agriculture to exchange ideas and best practices for the benefit of both communities.

“We have tremendous support from the community, fans and The Plantation Course coupled with an incredible title sponsor that strives to help this event grow every year,” said Sentry Tournament of Champions Executive Director Max Novena. “We appreciate the great partnership with Sentry and are confident the best is yet to come. We’re excited to serve as the PGA TOUR’s opening week event in 2024 when the new calendar year schedule debuts.”

“We believe it’s important to have purpose in what we do, and we’ve made it a priority to spend significant time on island building relationships with community leaders and organizations,” said Stephanie Smith, Chief Brand and Marketing Officer for Sentry. “Together, with the PGA TOUR, we’ve built great momentum these past five years and, together, we’re committed to making a positive, long-term and year-round impact on the Maui community.”

The Sentry Tournament of Champions has a rich history of champions, from World Golf Hall of Fame members to modern-day stars as represented by just the past four winners: defending champion Cameron Smith, Harris English (2021), two-time champion Justin Thomas (2020, 2017) and Xander Schauffele (2019).