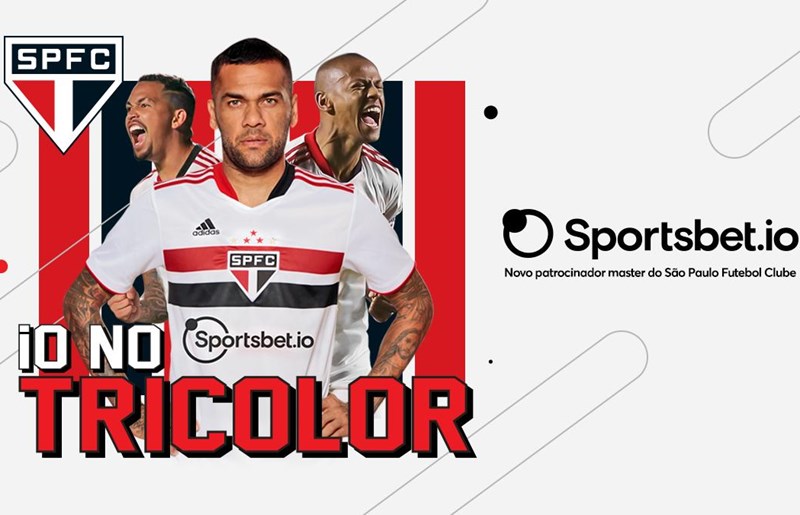 São Paulo Futebol Clube has a new master sponsor i.e. the website Sportsbet.io, one of the largest in the sports betting segment in the world and which, in recent years, has been investing more and more in the Brazilian market. The agreement is valid for the next three and a half years – until the end of 2024.

In addition to stamping its brand on the front of the São Paulo uniform, Sportsbet.io will also appear prominently on the back of the shirt, above the number of athletes. Other properties acquired by the brand range from the creation of digital content and platforms, activations in a Morumbi box, generation of opportunities in the website’s platform markets at events related to São Paulo, in addition to stamping the brand on the shoulder blade and back of the women’s team and on the basketball team.

São Paulo’s marketing executive director, Eduardo Toni, expressed his satisfaction with the agreement. “It is with great joy that São Paulo Futebol Clube starts this journey with Sportsbet.io, a company with expertise in the international football market. This agreement symbolizes our incessant work since the beginning of this administration to enhance our brand. Even under the suspicion of a few about the paths to irreversible professionalization, we were aware of the weight and tradition of our history. May it be another victory in this trajectory”, said Eduardo Toni.

São Paulo champion by Tricolor in 1998 and pentamundial by the Brazilian national team in 2002, São Paulo idol Denilson has been an ambassador for Sportsbet.io since 2018. He also showed his excitement with the new project.

“For my part, I can say that the expectation is the best possible. I’ve been with Sportsbet.io for three years and I know their seriousness and competence to deal with what lies ahead. For me, it will be an honor to make this bridge and play together with the fans that I always liked and that always hugged me. Helping to bring to Tricolor the biggest sponsorship deal in the club’s history, with a company that I trust – and I’ve been with it all this time – is rewarding. I can guarantee that a lot of cool things are coming out there”, he declared.

Sportsbet.io, by the way, is no longer a novelty on the national football scene. In addition to the partnership with Denilson, the site has also been one of Flamengo’s sponsors since 2019, adding numerous co-production projects by both parties. In addition, the company has always sought to approach the Brazilian market with several activations on its website to promote this journey. And the sponsorship of São Paulo will help even more to establish its bases of operation in the country.

Justin Le Brocque, head of marketing at Sportsbet.io, explains that this ad should open a new page in the brand’s history not only in Brazil, but also in its global expansion.

“São Paulo is one of those few clubs in Brazilian football that you don’t need to contextualize when talking about it in any corner of the planet. Creating a partnership with an institution of this size and representativeness means a big step for Sportsbet.io in our clear objective of always providing the best for our customers, especially in Brazil. We are sure that both sides will gain a lot from this exchange of experiences and I am also convinced that the São Paulo fans will come ‘to play together’ with us”, said Justin Le Brocque.

Globally, Sportsbet.io also stamps its brand on Southampton’s shirt, in addition to being a partner of Arsenal, traditional English football clubs. Known for being the biggest cryptocurrency betting site in the world, Sportsbet.io is also present at CS:GO, through the naming rights of Imperial Sportsbet.