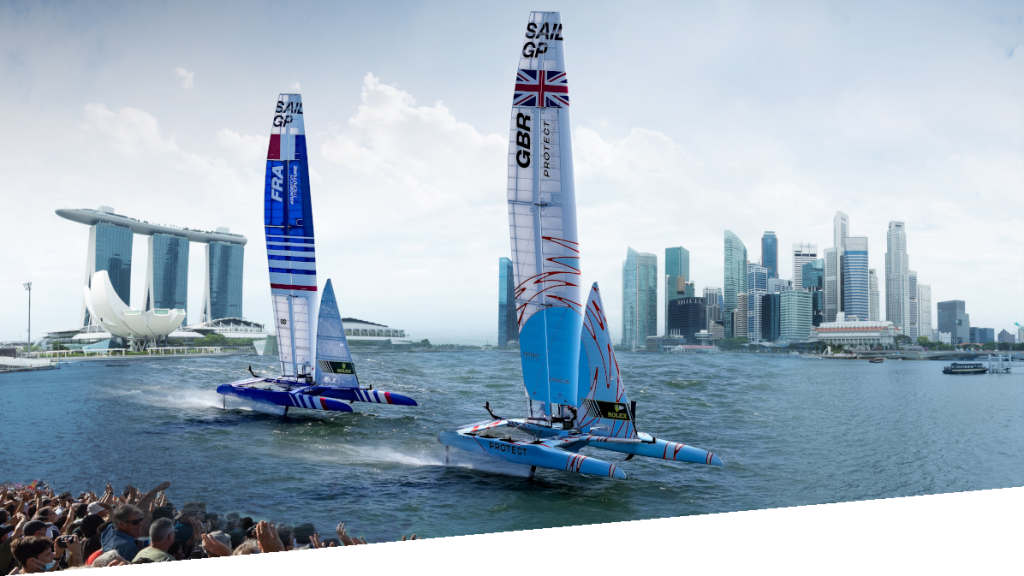 SailGP’s rapid global expansion continues with the addition of Singapore to its Season 3 calendar, as the iconic city-state plays host to Asia’s first Sail Grand Prix on January 14-15, 2023.  The event, which is supported by the Singapore Tourism Board (STB), will see the league’s 10 hydrofoiling F50 catamarans hit the waters in Singapore for the first time.

In the first event of a three-year deal, the ten teams competing in Season 3 – including new franchises Canada and Switzerland and returning nations Australia, Denmark, France, Great Britain, Japan, New Zealand, Spain and the United States – will race at Parkland Green in the picturesque East Coast Park in the eighth event on the calendar.

The Singapore event will join the nine countries that have already been announced for Season 3, with the championship kicking-off this month at the Bermuda Sail Grand Prix presented by Hamilton Princess on May 14-15. From there, the ten-nation fleet – comprising the sport’s best athletes – will head to Chicago, Plymouth, Copenhagen, Saint-Tropez, Cádiz and Dubai, ahead of Singapore, making it the biggest SailGP season to date.

After Singapore, the league – the first climate positive sports and entertainment property – will head to Christchurch, New Zealand and will conclude with the Season 3 Grand Final taking place at San Francisco Bay in May 2023. One further event is expected to be announced to complete SailGP Season 3.

Teams will race for two podiums in Singapore, as the world-first Impact League returns for Season 3, tracking the positive actions teams make in terms of sustainability and inclusivity. As part of SailGP’s Better Sport Strategy, the Singapore Sail Grand Prix will also include female athletes as part of the league’s Women’s Pathway Program plus introduce the sport to young people from diverse backgrounds through SailGP’s youth and community outreach program – SailGP Inspire.

SailGP CEO Sir Russell Coutts said: “From our inception, we have made it clear that our ambition is to be a truly global championship, with some of the world’s most iconic waterfront cities as our backdrop. With the confirmation of our first Asian Grand Prix, the addition of Singapore to the line-up and Season 3 now spanning four continents, our vision is becoming a reality.

“We have also found in the Singapore Tourism Board a like-minded partner who shares our commitment to a future powered by nature and recognizes the elite standard of sporting excellence demonstrated by the championship. We are excited to work together over the next three years and showcase SailGP and highlight Singapore as an iconic destination.”

Mr Keith Tan, Chief Executive, Singapore Tourism Board said: “We are excited to welcome the participants and fans of the first Sail Grand Prix in Asia. The event strengthens our calendar of sporting events and reinforces our position as a leading leisure and business destination. We support SailGP’s comprehensive strategy to reduce its overall carbon footprint, which furthers our ambition to become a top innovative sustainable urban destination.”

Robbie Henchman, Executive Vice President of Strategic Partnerships at IMG, said: “With the inaugural staging of the Singapore Sail Grand Prix next January, we are delighted to be extending our long standing and valued partnership with STB, bringing SailGP’s world class, purpose driven entertainment product to Singapore. The amazing spectacle of the F50 catamarans racing at the East Coast Park will offer Singaporeans and visitors alike a thrilling live event experience.”

The Singapore Sail Grand Prix will be broadcast live in over 186 territories through SailGP’s broadcast partnerships as well as across SailGP digital platforms including the award winning SailGP App.

SailGP is also continuing its bid process for its Season 4 host venues that share a commitment to a cleaner future and are actively taking action to move towards more sustainable practices and activities within their city.