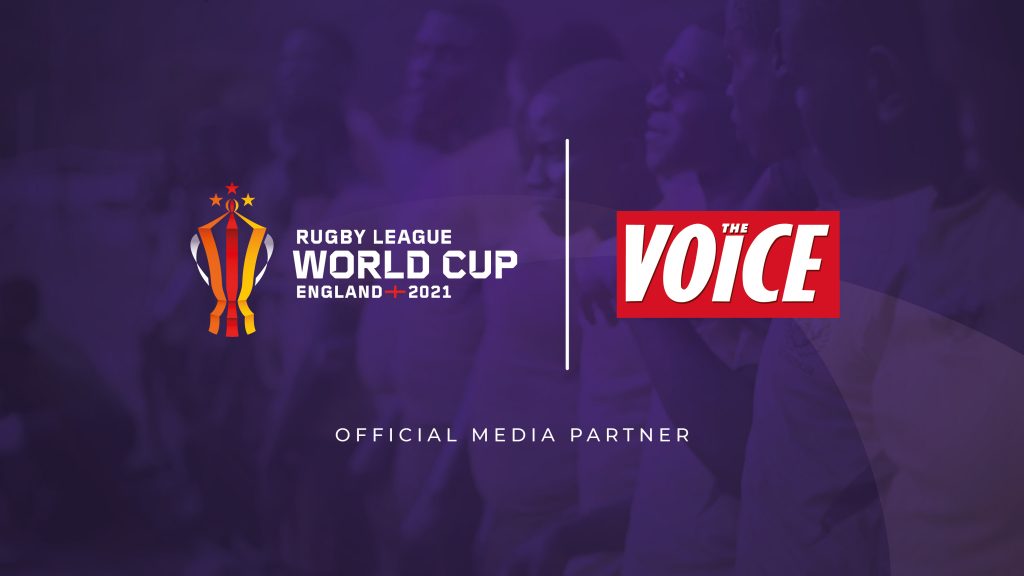 The Voice, the only national black newspaper operating in the United Kingdom, has become the first official media partner of the Rugby League World Cup 2021.

Founded in 1982 and owned by Jamaica National Group, The Voice is aimed at the British African-Caribbean community. Published monthly it also has a leading digital presence via its social channels and official website.

Rugby League World Cup 2021 will be the biggest, best and most inclusive tournament ever held, and is the pinnacle event in rugby league, contested globally every four years. The men’s, women’s and wheelchair competitions will be staged concurrently with 61 matches across 21 venues throughout England.

The tournament sees Jamaica competing for the first time ever after they qualified for the men’s competition, and will line up alongside Ireland, Lebanon and former winners New Zealand in Group C.

The partnership will include The Voice recruiting its first ever Rugby League reporter, James Aldred. Currently a Masters Student in Broadcast Journalism at Nottingham Trent University and the Sports Editor of University Radio Nottingham, James was able to launch the partnership by speaking to dual-code rugby legend, Jason Robinson, the international ambassador for RLWC2021.

The Voice’s Sports and Features Editor, Rodney Hinds, has been a member of the RLWC2021 Business Advisory Group since 2019, and recently supported the creation of the tournament’s diversity and inclusion action plan. Both parties will also collaborate to promote the tournament including a commitment to editorial and commercial opportunities.

Rodney Hinds, Sports and Features Editor at The Voice, said: “Diversity, equality and inclusion are so important. Without it, those with talent and ability might never get their opportunity. RLWC2021 is groundbreaking in its approach to these areas, and we know sport has the power to create positive change. By working together we can create profile, visibility but also importantly tangible actions and impacts for our readers and communities.

“Jamaica being in RLWC2021 is a time for celebration and also inspiration. The tournament is about ‘The Power of Together’ and is committed to be a powerful force for good, including the fight against racism and discrimination. The sport of Rugby League has a history of breaking down barriers, including Clive Sullivan being Great Britain’s first black sports team captain in 1972. Our partnership is about working together to continue to create change on pitches, clubhouses, terraces, boardrooms, media and communities.”

Jonathan Neill, Commercial Director at RLWC2021, added: “This is a hugely significant, relevant and exciting partnership for RLWC2021. The tournament’s strategy is centered on inclusion and creating positive social impacts within communities. The Voice has championed diversity across the UK and celebrated black excellence in all industries, including sport, for nearly 40 years and will help RLWC2021 connect, learn and grow.

“Rodney’s support to RLWC2021 to date has been defining and hugely appreciated, and we’re excited with this natural extension to continue to positively engage the Black African-Caribbean community across the UK and further afield. James becoming The Voice’s first ever Rugby League reporter, developing his career and influencing others is a superb example of how we can start to do that.”
SHARE…