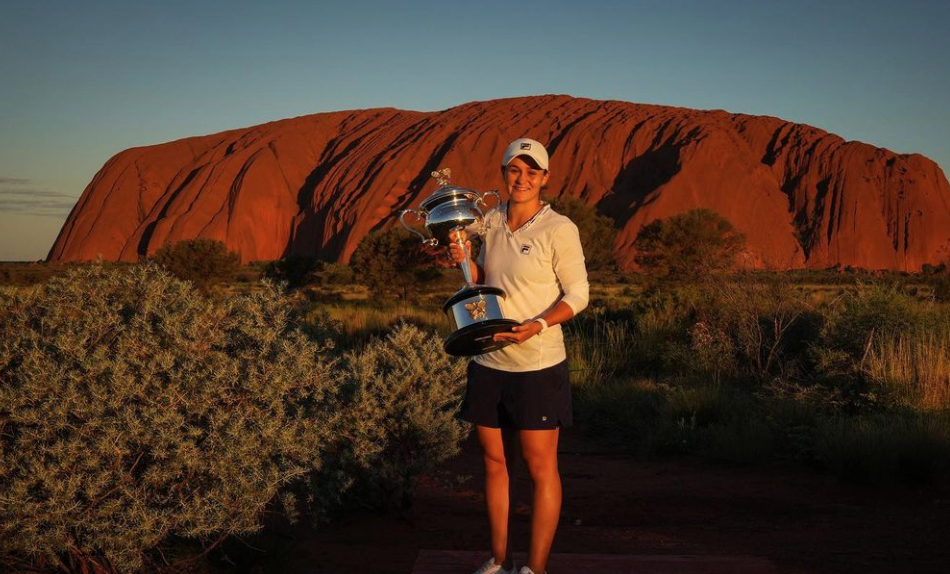 After the shock retirement by World Number One ranked female tennis player Ash Barty, Michael Pirrie analyses the Aussie phenomenon and why her sudden resignation has had such a dramatic impact.

The sudden retirement of the world’s number one women’s tennis player Ash Barty, aged just 25, has sent shockwaves across the sporting globe.

Barty’s unexpected announcement on Instagram generated headlines on capital city digital billboards across the world but was felt most in her home nation.

With Australia still grieving the recent sudden death of its cricket spin king Shane Warne, the departure of its modern day tennis queen also broke the heart of this sports loving nation.

Unlike Warne who had retired many years earlier, Barty has left at the peak of her powers, further compounding the sense of loss surrounding her retirement. The international outpourings of admiration and gratitude for Warne and Barty have highlighted how much sport can mean in times of national and global uncertainty.

Australian Prime Minister Scott Morrison responded quickly to the news about Barty, calling to personally thank her for bringing hope and joy to her country and the tennis world.

“I do want to say thank you to Ash for inspiring a nation at a time when this country really needed a good shot in the arm,” Morrison said.

Tributes flooded social media platforms for Barty, whose grace under pressure and generosity to her opponents and wider community endeared her to the general public.

Barty’s pride in her indigenous Aboriginal heritage helped to expand the appeal and relevance of tennis to new groups and communities.

“The local tennis establishment here had been hoping that Barty would lead a revival in Australia’s tennis fortunes.”

The nation’s political opposition leader Anthony Albanese said Barty was “an inspiration, a magician on the court” who lifted the nation with her as she climbed to the top of the tennis world.

There will be no long goodbyes or farewell tennis tournaments. While Australia has long been a tennis power that has produced several world champions such as Rod Laver, Margaret Court, John Newcombe, Pat Cash, Pat Rafter, and Leyton Hewitt, the nation has struggled in the past 20 years.

The local tennis establishment here had been hoping that Barty would lead a revival in Australia’s tennis fortunes. Just as the nation was getting used to Barty’s success amid hopes of a possible Grand Slam this calendar year, her departure has left a sudden vacuum in world tennis.

By walking away from the tennis court at the apex of her career Barty has shocked and surprised the sporting world, depriving it of a once in a generation talent.

In popular culture, Barty’s sudden departure is like the Beatles retiring after Sgt Pepper’s Lonely Hearts Club Band and disbanding before Abbey Road and Let It Be. Like Charles Dickens putting his pen in the inkwell after A Tale of Two Cities. After comprehensively mastering all grand slam surfaces, winning on grass, clay and hard courts, many experts believed the best of Barty’s already exquisite tennis was yet to come.

She was a winner on the tennis court and in the eye of the public. Her appeal and charisma was like that of the shy girl next door who went out and conquered through her own self-belief.

Barty was perhaps even a bit embarrassed by the scale of her accomplishments, spending the past two years at the top of world tennis and extending the gap between herself and the best on the women’s circuit. Popular and beloved, she is a symbol of Australia’s egalitarian sporting spirit and was 2020 Young Australian of the Year.

A supremely gifted athlete, Barty has been successful in three theatres of sport important to Australia: tennis, cricket and the Olympic Games, winning bronze in the mixed doubles at the Tokyo Olympics.

Barty was a prodigy destined for sporting greatness, and began playing tennis as a four year old at the West Brisbane Tennis Centre. Modest and humble, she modelled herself on mentor and indigenous tennis great Evonne Goolagong Cawley who overcame numerous cultural and sporting barriers to became the world’s number one tennis player in the 1970s and early 80s, her mother personally stitching home made tennis uniforms for her as a tennis junior.

By turning her back on tennis as the world’s number one ranked player, Barty has also broken the modern day sporting stereotype, relentlessly pursuing fame and fortune almost regardless of the personal costs involved.

“According to the Daily Mail, Barty earned $32million from her 11 year playing career plus an estimated $15million from endorsements and sponsorships.”

The value of sponsorship deals and prize money that she has given up via this move will extend far into the millions. According to the Daily Mail, Barty earned $32million from her 11 year playing career plus an estimated $15million from endorsements and sponsorships.

Barty leaves the sporting stage with no regrets and with no ‘what-might-have beens,’ departing the drama of the tennis soap opera on her own terms, scripting her final curtain calls after turning her dreams into two stunning realities that attracted worldwide applause.

The first was winning Wimbledon, the world’s most prestigious tournament, which Barty had imagined since childhood, climbing the stands and falling into the arms of golf playing partner in a modern day Romeo and Juliet sports embrace.

If Wimbledon was a personal dream, winning the Australian Open earlier this year was one for her nation, when she became the first national to secure the home tournament for many decades breaking.

In doing so, Barty also saved the Australian Open tournament and organisers from enormous embarrassment and controversy after the Novak Djokovic Covid vaccination debacle.

Barty was different and she leaves a unique impression on world sport that will take time and context to fully understand and appreciate.