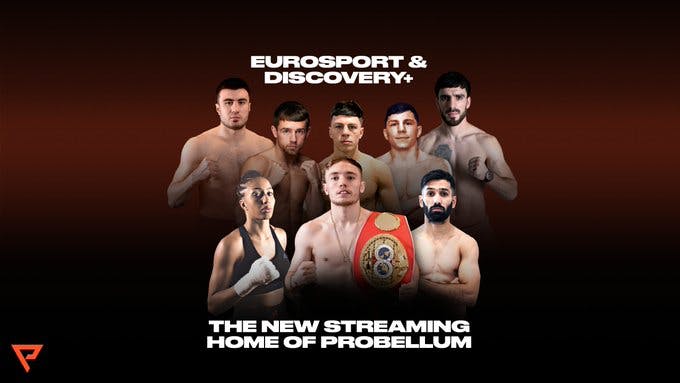 Probellum has today announced a multi-fight agreement with Discovery Sports.

The partnership starts with back-to-back events on March 18 and 19 with Discovery Sports set to broadcast the two Probellum Evolution shows through Eurosport’s linear channels, discovery+* and Eurosport App** to millions of homes across 62 markets and territories in Europe and the Indian sub-continent.

Since launching in September 2021, Probellum has signed almost 50 fighters from across the world, including current and former world champions, past Olympians and emerging talents.

“Agreeing a multi-fight deal with a broadcasting powerhouse such as Discovery is a truly momentous day for our company so early in our journey.

“Discovery’s truly global audience is the perfect platform for us to help continue with our core mission to open up boxing to new audiences by bringing together the best fighters for fans around the world.

“Together, I know we are going to bring about real change to the way that live boxing is presented. I have no doubt that it will be the perfect broadcast partner as we aim to transform how fans can experience boxing.”

“Discovery has a strong heritage taking sports to wider audiences and in helping grow competitions and events using our full scale of channels and digital platforms.

“With the global reach that Discovery enjoys, this new partnership with Probellum is a perfect opportunity to showcase some of the best athletes in the world to millions of passionate sports fans in Europe and the Indian subcontinent.”

As the Home of the Olympics in Europe***, Discovery showed every minute of the boxing competitions across its platforms at Tokyo 2020 and will be again broadcasting an array of former Olympians now competing under the Probellum banner including the Olympic champion trio of Mossley (2016), Uzbekistani super heavyweight Bakhodir Jalolov and middleweight Brazilian Herbert Sousa who both secured gold in Tokyo.

Viewers will also be able to watch the talented Olympic trio of silver medallist Pat McCormack, his twin brother Luke and Peter McGrail who all represented Team GB in Japan, and bronze medal winner Hovhannes Bachkov from Armenia.

After the double-header in Dubai, Probellum’s impressive roster of fighters then moves to Newcastle on March 25, where hometown favorite Lewis Ritson takes on Dejan Zlaticanin of Montenegro, with world title hopes on the line for both men.

The Discovery cameras will follow Probellum to Liverpool on April 22, for a world bantamweight title clash between local hero Paul Butler and champion John Riel Casimero of the Philippines, before the action moves to a major show in London, in May.

*discovery+ is available is available to watch on discovery+ in Denmark, Finland, Italy, Netherlands, Norway, Sweden and the United Kingdom and Ireland.
**Eurosport App is only available in Europe
***Discovery is the Home of the Olympics in Europe, except Russia