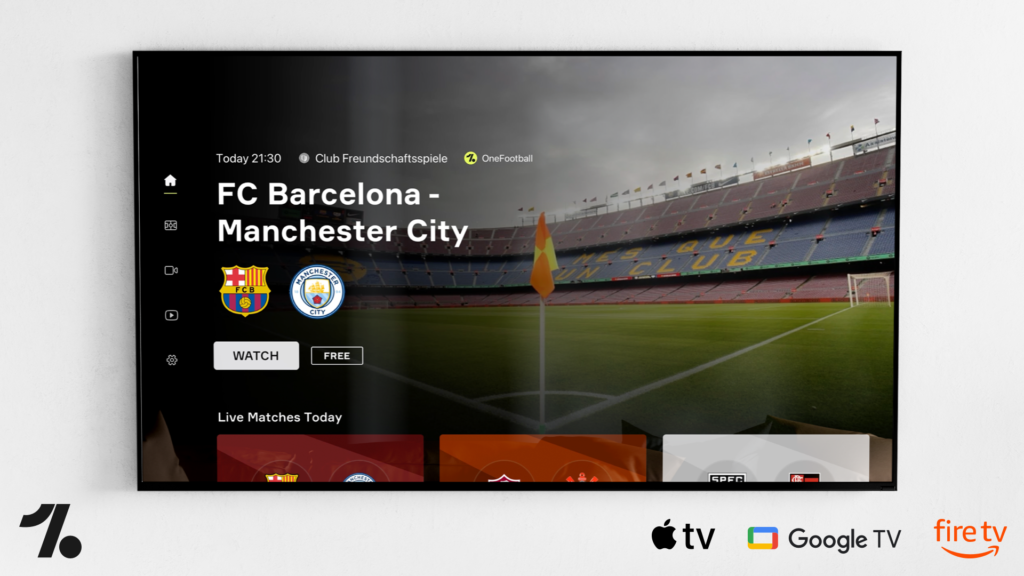 OneFootball, the world’s largest football media platform, has today announced a major new product as part of its multi-platform strategy, with the launch of a connected TV app that will bring its library of video content to hundreds of millions of TV screens for the first time.

OneFootball TV will allow the platform’s +100 million Monthly Active Users (MAUs) to enjoy OneFootball’s full suite of video content from the world’s top clubs, leagues and federations on their TV screen. Integrating with its mobile and web platforms, the app creates a seamless OneFootball experience across devices.

With OneFootball TV, fans all around the world can access a mixture of free and paid live matches from OneFootball and its partners, including elite leagues such as the German Bundesliga, Italian Serie A and Brazil’s Campeonato Brasileiro Série A*. The OneFootball community can pay for single matches and tailor-made packages through the TV platforms’ native payment methods, or through a web browser QR code.

Alongside thrilling live match action, people can catch up on all the goals and saves they missed with curated match highlights, plus breaking news and club content tailored to each fan’s individual interests. Official content from some of the world’s biggest teams will be available provided by OneFootball’s extensive network of industry partners.

The launch also opens up new opportunities for OneFootball partners to connect with OneFootball’s audience of young and engaged football fans, with all video content on the platform supporting programmatic advertising, including live free-to-air games and highlights videos.

The app is now available on Apple tvOS and Amazon Fire TV devices around the world, with support for Android, Samsung and LG smart TVs to follow in the coming weeks. Android TV devices include recent TV models manufactured by the likes of Sony, Hisense, Philips and more.

Ismail Elshareef, Chief Product Officer, OneFootball, said: “Today’s football fan experiences the game in many different ways, whether that’s in a stadium, on TV, or on their mobile device. We know our users want the option to watch live matches on the big screen, so we’ve answered their call by making it even easier to enjoy the game they love, in any way that suits them – on their phones, on the web, and now on connected TV devices. We can’t wait to bring OneFootball’s incredible variety of content to television screens around the world – in full HD, that brings you, and your friends and family even closer to the action.”