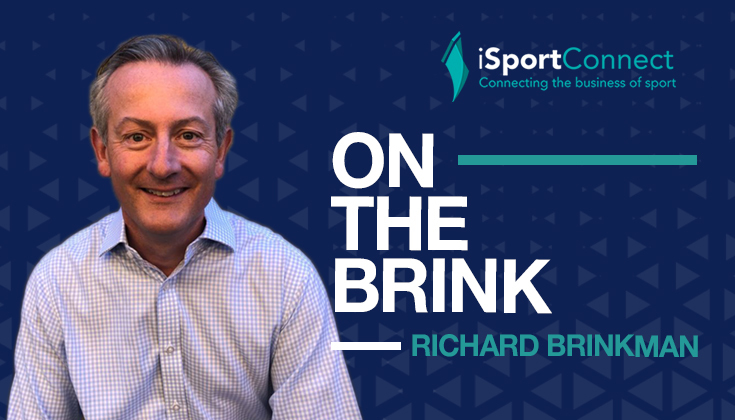 On The Brink: The Three Themes Established By Sports Bodies Who Have Exited COVID Positively

In the first of a new blog series, ‘On The Brink’ by Richard Brinkman takes a view from the edge of the sporting landscape at some of the latest and most relevant areas of the industry. Richard kicks off by sharing his opinion on three themes he has noticed by those within sport who have managed to find success during the coronavirus pandemic.

Sometimes it feels like nothing in the world of sport is as it was 18 months ago. There is no doubting that attitudes, assumptions and acceptances that have been the norm for a long time in the sporting eco-system have undergone a seismic shift.

Enforced absences, empty stadia and highly regulated behaviours have forced sport into many difficult conversations and uncomfortable decisions, as well as highlighting issues traditionally kicked into the “long grass”.

Simultaneously, of course, the lifestyles, priorities and expectations of many millions of sports fans and followers (so often the last stakeholders considered but ultimately the bill payers) have also changed. My own perspectives have definitely altered in line with my circumstances.

“All these factors are inter-connected and, in all likelihood, get one right and the others will likely fall into place. Conversely, getting one wrong is likely to unravel the other areas.”

Like many, I am working more remotely and with a broader range of businesses and stakeholders in sport than previously. Most of these organisations are focussed on enabling coherent and productive change that adds value and can accelerate results.

Through this lens I have been trying to note some of the common themes amongst the sports bodies that are deemed to have had a “good COVID” (i.e. are in good shape to drive or exploit growth) and regular errors among those that have found the pandemic extremely taxing (i.e. are in survival mode).

Some of the key themes I have noted are:

The key point is that the vast majority of UK sports enthusiasts follow more than four sports pretty keenly – they observe closely a range of activities and can discern good from bad. Those bodies that act well around the key themes will be at a competitive advantage over those that don’t. All these factors are inter-connected and, in all likelihood, get one right and the others will likely fall into place. Conversely, getting one wrong is likely to unravel the other areas.

Before looking at some examples, good and bad, I should acknowledge that running a governing body in the UK is a tough job at the best of times, let alone in unprecedented times. The balance of protecting legacy whilst driving progress, simultaneously supporting elite performance and grassroots growth, satisfying a myriad of funders, historic decision-making structures, dealing with well-meaning amateurs alongside ambitious professionals (to name but a few of the competing interests) is, always, very difficult. Yet, many of us would take it on in a heartbeat and most execs do it for well below what they would be paid in virtually any other industry. The public at large expect high standards, and rightly so. It has been very tricky, but not impossible.

If you look at golf back in Spring 2020 the various bodies (R&A, European Tour, England Golf, PGA etc) were all quickly aligned around a simple coherent plan. They wanted to get golf clubs open as quickly as possible and their core constituents out playing again. Once this was achieved professional tournaments could recommence for TV to maintain presence/interest and support the top end. They were prepared to accept some compromises around how golf clubs functioned and tournaments were run to achieve this. Thus they were able to drive and project positivity from the inside of their sport out. More people were able to try the sport and, crucially, more people wanted to.

Contrast this to the ECB who created consternation amongst their core constituents (existing ticket buyers, Clubs, Counties) with the messaging fiasco around trying to sell and launch the Hundred. We don’t need to trawl through every example but suffice to say that telling people that already like cricket that your new tournament “is not for you” is hardly likely to build advocacy. Then branding the existing cricket family (who are the volunteers that largely run All-Stars, Dynamos programmes, etc and pay £100+ for a day at the Test match) as too male, pale and stale is more likely to build alienation than bridges. Finally, failing to make an effective case that meant that cricket had to restart after other outdoor activities left the grassroots wondering about HQ priorities and/or competence.

I guess that neatly segues into honest, authentic and consistent communication.

The racing industry were always very clear that they wanted to get racing restarted at the tracks, not so much so that people could go racing but in order to support the betting industry that is the single most vital factor in keeping the equine industry and its thousands of workers afloat. Satisfying broadcast obligations simultaneously was a helpful by-product too. Again, circumstances meant that unfortunately the messaging was not exactly what racing enthusiasts would ideally want to hear. However, it was clear, honest and, all things considered, a step forward. As such it was welcomed.

Meanwhile, from the ECB there was no lack of transparency – just far too much “messaging” which lacked authenticity due to a lack of coherence. In summer 2020 when Pakistan toured England we were celebrating the cricketing family and how everyone pulls together. By autumn 2021 those words look pretty hollow in light of pulling out of the return trip.

“Despite very testing circumstances and much uncertainty the use of data, research and insight by the Rugby League World Cup team to bring in a diverse and varied range of commercial partners has been inventive and impressive.”

Likewise, it makes no sense to continually claim that the mental wellbeing of your players is your primary concern whilst simultaneously loading more and more workload on them and giving them less and less opportunity to perform at their best. This is akin to suggesting that an employee will get the best technology and tools to do their job, loading their MacBook Pro with Windows 95, giving them no Internet access and then wondering why they aren’t competing with the industry’s best.

Finally, we had the unfortunate cancelled/postponed India test at Old Trafford. In the morning it was covered by insurance, by the afternoon it wasn’t . Why not just be honest and say that it depends on an interpretation of the small print? Claiming that the decision had nothing to do with the IPL when the BCCI had tried to move the match six weeks earlier for that very reason also stretched credibility. Finally, the refusal to be at all critical smacked of prioritising cricketing politics over the cricketing public. Trust is hard won and easily lost.

But there are successes that have battled through the tough times. Despite very testing circumstances and much uncertainty the use of data, research and insight by the Rugby League World Cup team to bring in a diverse and varied range of commercial partners has been inventive and impressive. Their creative approach is an exemplar of how to maximise and best show what you have to offer.

The ECB, to its credit, has also bought in to making fact-based decisions – their use of a wealth of research and insight to build and market The Hundred should be lauded, whatever the outcome of the competition. They have also issued a flood of figures subsequent to the first edition – many of which point to how important the tournament has been for women’s cricket in particular.

However, the issue with being data-driven is that when one presents decisions without compelling evidence it does not look good. Inconsistency and a lack of coherence damages stakeholder confidence.

“The ECB, to its credit, has also bought in to making fact-based decisions – their use of a wealth of research and insight to build and market The Hundred should be lauded, whatever the outcome of the competition.”

For instance, the decision in August to approve £2.1m of ‘Long-Term Incentive Plan’ payments to ECB senior execs (reportedly to be shared by six or seven individuals) needed some careful explanation in the current environment.

Particularly so when we look at some of the information that is in the public domain:

Whether these payments are deserved or not I cannot comment on. What I can say, however, is that I am sure they are based on a number of metrics and targets that have been hit. Please share them! If they are around broadcast contracts, The Hundred or are “soft” as agreed with a previous regime so be it. Just be clear and honest!

The current reasoning of “exceptional leadership” across the pandemic does not ring true or instil confidence. It is not exceptional leadership to ensure professional cricket continued to be played in order to continue to fund the entire cricket pyramid as I recently heard Tom Harrison suggest. This is, literally, the ECB doing its job – pretty much its sole purpose. Even those that love cricket as much as I do are not going to clap a fish for swimming Tom! We do not pay firefighters more when they put out fires, nor nurses more when wards are full or soldiers when they go into battle.

As someone with measurement, data and insight-based decision-making experience I can vouch for the fact that if you use data to reach decisions but are not then prepared to share that information you are on a hiding to nothing and must be prepared to be viewed with scepticism. Comms and the optics of these things matter – especially when we all crave certainty in uncertain times.

For all sports, they matter most of all to your core constituents who want to believe in you the most. Without those solid foundations you are on shaky ground to build any kind of permanent growth.