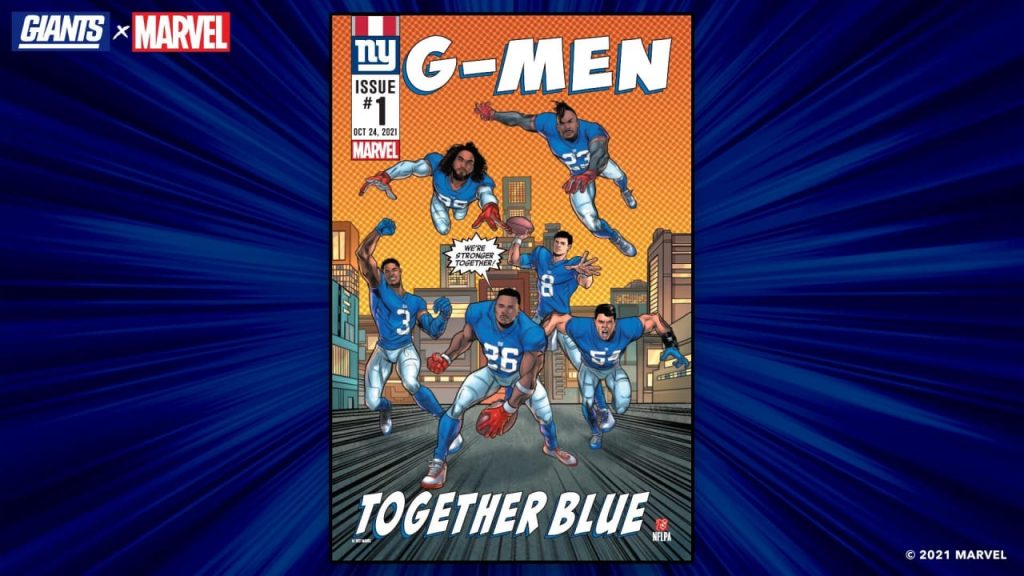 The New York Football Giants and Marvel Entertainment have announced a collaboration to debut a series of Super Hero-themed integrated content and experiences when the Carolina Panthers visit MetLife Stadium on October 24th.

The collaboration will include a Giants-themed comic book that will be released during the game. The story will feature six Giants players: Daniel Jones, Saquon Barkley, Sterling Shepard, Leonard Williams, Logan Ryan and Blake Martinez, marking their first appearances alongside the Avengers in the Marvel Universe.

“As we welcome fans back to MetLife Stadium, we will continue to look for ways to engage our consumers,” said Pete Guelli, Chief Commercial Officer, New York Football Giants. “The Giants and Marvel are two iconic brands with a storied history, and we can’t wait to see this collaboration featuring our players come to life.”

“The overlap between sports and entertainment continues to grow, and this collaboration with the Giants will result in some of our most integrated work yet with the NFL and Marvel’s iconic heroes,” said Mike Pasciullo, Vice President, Marketing and Communications at Marvel Entertainment. “We look forward to seeing the Giants come to life in the pages of our comics, and we are excited to share Marvel’s storytelling with Giants fans everywhere.”

The Marvel Super Hero™ Day experience will begin from the moment fans enter the building, including Marvel-themed integrations throughout the plazas, MetLife Central. Video platforms throughout the bowl and concourses will showcase Marvel-themed videos, player headshot graphics, animations, and interactive trivia/features.