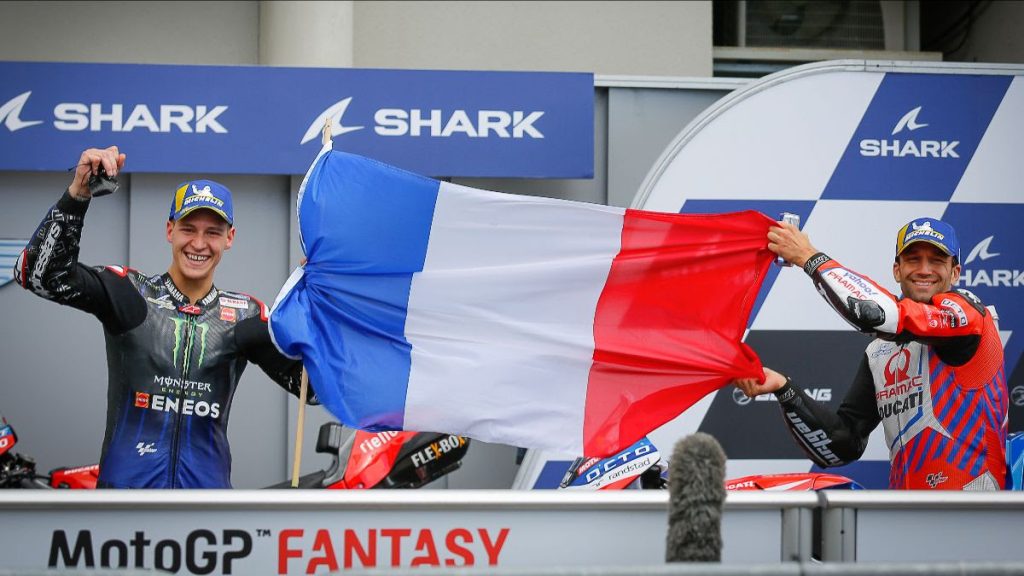 Dorna Sports is delighted to announce a six-season contract extension with CANAL+ which sees the iconic broadcaster retain the exclusive rights to the FIM MotoGP™ World Championship until 2029.

Every Free Practice, qualifying session and race for each category in the MotoGP™ World Championship will continue to be shown live and exclusively, with a broadcast team of pundits and experts on site at every round. At least two events per season will be shown free-to-air, and fans can also follow the action on myCANAL with live tracking, a choice of OnBoard cameras and multiview options. A dedicated OTT channel on myCANAL ensures fans always have MotoGP™ at their fingertips.

Since its arrival on CANAL+ in 2019, MotoGP™ has seen audience numbers grow exponentially, with a million people watching the Spanish Grand Prix in May 2021. Spectacular races, breath-taking competition and the incredible success of MotoGP™ World Championship leader Fabio Quartararo (Monster Energy Yamaha MotoGP), as well as compatriot and two-time World Champion Johann Zarco (Pramac Racing), are keeping French fans glued to their seats.

This six-year contract extension sees the fastest motorcycle racing Championship on Earth remain on CANAL+ as the channel continues to offer subscribers an incomparable selection of the world’s biggest sports and motorsports.

Maxime Saada, Chairman and CEO Canal+: “We are delighted to extend our collaboration with Dorna for another six years of exclusive MotoGP World Championship broadcasting. The appeal of MotoGP is growing consistently for our subscribers, who praise the excellent work of our editorial teams. With the Formula 1 World Championship and WRC, this is another major asset in our sport offering.”

Manel Arroyo, Chief Commercial Officer, Dorna Sports: “We are very proud not only to extend our contract with CANAL+, but to do so for another six seasons, showing the strength of our collaboration. It’s fantastic to see MotoGP enjoy ever-growing success across France and we are delighted to have a partner like CANAL+ providing such top quality coverage. I’m confident that together we can continue giving fans the best experience of MotoGP, as well as welcoming new audiences as the sport goes from strength to strength.”

Dorna signs new deal with Ziggo Sport in the Netherlands

Dorna has also unveiled Ziggo Sport as the new home of MotoGP™ in the Netherlands. A new three-year contract beginning in 2022 will see the channel broadcast all MotoGP™, Moto2™ , Moto3™ and MotoE™ races and qualifying sessions, as well as practice sessions from each Grand Prix class, live and exclusively.

That therefore includes the Dutch TT at the legendary Cathedral of Speed – the TT Circuit Assen – which will be broadcast live on Ziggo Sport and Ziggo Sport Totaal to give fans the best coverage possible of their home Grand Prix. Ziggo Sport will also regularly cover MotoGP™ with studio broadcasts, as well as providing on-site reporting and commentary.

Will Moerer, Director of Ziggo Sport: “MotoGP is a great sport, and a package that many parties are interested in within the sports rights market. We’re therefore very happy that we’ve succeeded in acquiring these rights. Every race weekend brings spectacle, and because it’s always well covered, you, the television viewer, get to experience it all.

“Racing will continue to occupy a prominent place in Ziggo Sport’s programming in the coming years, as well as on our 24-hour channel Ziggo Sport Racing as part of the Ziggo Sport Totaal package. With the Dutch contribution of Rinus van Kalmhout in IndyCar, champions Nyck de Vries and Robin Frijns in Formula E, and hopefully eventually the great Dutch talent Zonta van den Goorbergh in the MotoGP paddock joining Bo Bendsneyder, the motorsport fan will be well served by Ziggo Sport in the coming years.”

Manel Arroyo, Chief Commercial Officer, Dorna Sports: “We are delighted to begin a new partnership in the Netherlands with Ziggo Sport. Ziggo Sport has fantastic experience in creating exciting, high quality motorsport broadcasts for viewers across the country and we are excited to see MotoGP join the network from 2022. The Netherlands is an important country to MotoGP and motorcycle racing, and hosts one of the world’s truly legendary racetracks: the TT Circuit Assen. We very much look forward to working with Ziggo Sport to bring audiences the best experience of our sport, as well as reaching new fans across the Netherlands as the spectacle on track only gets better.”