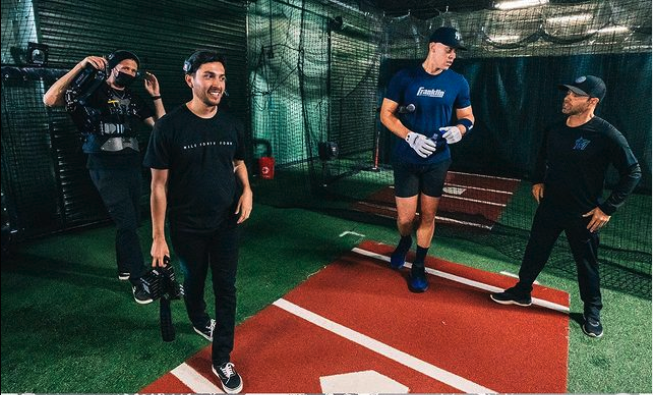 Member Insights: Why inclusion in sports marketing starts behind the camera

In this month’s Digital Café – David Granger, Content Director at Cinch, looks at how diversity and inclusion needs to include production crews – and the results can be pretty powerful.

At Red Bull Media House, we had a (female) global head of social media. Each year she would guard against a highlights reel of female athletes to mark International Women’s Day.

The arguments were 1) we should showcase women’s achievements all year round 2) to demonstrate progress we need to have more women behind the camera as well as in front.

And that should, arguably, apply for all inclusion tactics. In 2022, Statista stated 75 per cent of all NBA players in the US are African American, while career site Zippia says the mix of digital media producers
in the US is 71 per cent white and African American 7 per cent.

Does it matter? Shouldn’t any digital producer worth her salt be able to tell stories, create and capture content without being influenced by their own background?

Possibly, but one company is seeing better results when creating digital sports content when there is relevance, reference and rapport between crew and athlete.

Fifteen years ago, MILE 44 started as a sports PR agency for brands and athletes. In 2017 it evolved into a content studio as sports marketing demanded more photography and video.

The company believes content should tell great stories and have purpose. MILE 44 founder, Melinda Travis said: “The goal is to create things that make people want to get up and go fucking do something after they watch it. We want to ignite whatever fire people have inside through what we create for our partners.

“We put the integrity of the sport and the athlete at the centre of everything. The athlete has to love what we create and have a good experience or we’ve failed.”

This strategy is supported by the choice of content creators. Travis observed that self-taught creatives, as opposed to traditional graduates, are less constrained.

She said: “I gravitated towards younger, entrepreneurial creators who put everything into their work and pushed boundaries. People who would be overlooked by other agencies because they were too young, didn’t have enough experience or formal training. We doubled down, not only because we were building a talented team, but an incredible community of people who did things their way. And that comes through in what we make.”

These creators are as likely to be discovered on Instagram as LinkedIn as MILE 44 is looking for people who are ”…crazy talented, have a solid work ethic and push themselves beyond what they’ve done before.” When it comes to hiring “mad creativity beats technical expertise every time. Technical stuff can be learned. Artistry can’t.”

What MILE 44 does make is energetic, edgy content around sport and athlete activations in, amongst others, power-lifting, football (the soccer variety), baseball, basketball and ice hockey.

There’s a determined, dark tonality and energy to productions which stems in part from company philosophy and in part to the producers themselves.

Because, important to the company is its strategy for inclusion in production teams. There is a strong ethos that connection between subject and producer makes for stronger content.

Travis: “Culturally relevant content comes from people who live, breathe and are culture. If the people in that room all look the same and think the same, it’s not possible.”

“We don’t insert culture on its own, we extract the culture from the individuals and build around what is authentic to them in terms of fashion, music, art, community and all the other things that they’d say defines them.”

There is also a realisation that the good intent for diversity and inclusion is not always feasible. As Travis states: “It’s hard for bigger brands and agencies who have diversity challenges to change overnight, but by partnering with us, they are at least able to do it on a project-by-project basis.”

The company, based in Los Angeles, is now expanding its footprint into Europe and, as the future of digital media in sport evolves, it will adapt to meet new expectations and requirements.

The expectations are that content will either be much, much shorter to reach the TikTok/Instagram audiences, or longer format documentaries which appeal to the Netflix/streaming audience.

And the name? Where does MILE 44 come from? “When we started, my team and I had a seven-hour drive from Los Angeles to Arizona and figured that time would force us to come up with something.

It wasn’t going well. My team was throwing out ideas. I liked none of them. As I was ranting about being so uninspired because I saw nothing but desert, we passed milepost 44. There was something about it that sign and ‘MILE 44’ that connected.

In the end, we named the company in a car, in the middle of nowhere while I was pissed at myself for not feeling productive. Very fitting!

“When we started digging into the numerology meaning of 44 which, in business, is about building for the future and feeling a responsibility to guide other people’s success. There couldn’t be anything that represents us better.”