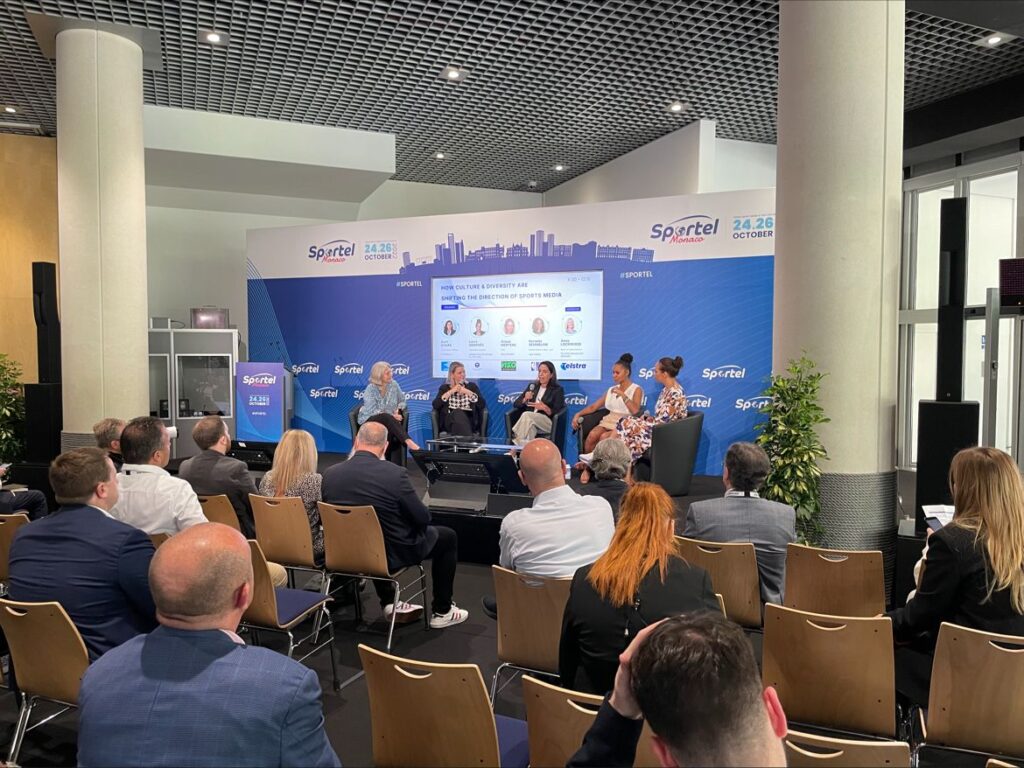 Jay Stuart has been to more editions of Sportel than he would care to mention. The Editor-in-Chief of iSportConnect, was our man on the ground in Monaco this week in this article he reports back his findings from the event.

Sportel Monaco has come roaring back this year after a tentative post-covid return last autumn. The pandemic seems like a just a bad memory and you can feel the sheer enjoyment of delegates getting to mingle in person again and see a celebratory ebullience to the scale and sophistication of some of the exhibition stands, even if they’re not necessarily new.

The Bundesliga’s big screen is particularly eye-catching and the likes of ESPN, WBD (Warner Bros. Discovery) and Infront loom large, as do less well-known brands like feedconstruct, Sportway and the Eskootr Championship.

The delegate count of close to 2,000 attendees is just a bit shy of the pre-pandemic level. The number of Asia-Pacific participants has ebbed from about 15 per cent of the total to about 5 per cent, which might have less to do with covid than today’s time and budget pressures. The Sportel organisers are looking to get the APAC crowd to the first edition in Bali from February 23-24 next year (more on that later this week).

The tech trend continues to be high profile with many exhibitors covering various aspects of streaming and production, AI and data. You see as many stands for tech providers as content distributors. At least it seems that way.

Former IOC marketing director Michael Payne, who was on the Sportel Awards Jury this year, shared some reflections on the trajectory of Sportel since he first started coming in event’s early days in the 1990s. “It used to be about the big American leagues and broadcasters holding forth and then it was dot.com and then the big thing was China and now it is tech. But it’s interesting that it’s more about digital solutions and you don’t see the big Cloud infrastructure providers here like AWS or Alibaba (a consulting client of his).”

He noted that Cloud-based distribution has exploded since covid. For the Olympics, it used to account for about 2 per cent of the total traffic. For the Tokyo Games it was more like 30 per cent and for the Beijing Winter Games it was closer to 50 per cent.

“That has a big positive knock-on effect,” he said. “It means the broadcasters paying significant rights fees can reduce their costs to ease the pressure. They don’t have to send so many people and pay for accommodation for several weeks.”

Instead of 800 for a big broadcaster, it might be 500. And that’s probably going to continue to come down as remote production becomes the norm. With all of the streaming solutions providers at Sportel, it can be easy to lose sight of the old-fashioned satellite and fibre backbone providers who remain
fundamental to major events distribution. They are here too.

One of the leaders in fibre, Montreal-based Aldea, is at Sportel under a new brand, Vivaro Media. The company’s network delivers a big chunk of the unilateral output for the Olympics and the FIFA World Cup as well as coverage of the EPL, Serie A, LaLiga, MLB and others. But it does streaming delivery too.

“What delivery method you use all comes down to specific needs,” said Larry Tonon on the Vivaro Media stand. Unfortunately, there is another Vivaro Media stand only a few metres away. This Vivaro Media is the number one sports platform in Armenia (showing the NBA, LaLiga et al). At Sportel, the Yerevan-based group is pitching its expertise in setting up OTT channels.

For the first time this year there was live production of the Isle of Man TT Races (May 29-June 11). Greenlight Media did the production (with 26 cameras, two helicopters and 120 people) and sold the live fee worldwide, as well as highlights. The government of the Isle of Man, which owns the event, set up a TT+ platform for SVOD of the event with a price tag of £14.99. Guess how many buyers they had?

When Greenlight Media’s Jon Quayle, at Sportel without a stand this time but hoping to exhibit again, told me the figure, I said, “Wow.”

He grinned, “That’s what everybody says.”

Seen around Sportel
David Dellea, long-time head of PwC’s sports operation In Switzerland, is at Sportel for the first time. He is now building the sports practice for consultancy Altman Solon…

Also popping his Sported cherry is Anmol Mahlotra, the head of sports partnerships for SNAP Inc, accompanied by London-based Kahlen Macauley. Anyone who thinks SNAP (363 million active users) is just about short clips is way off the pace. It shows 3-5 min. highlights of all the F1 races (in 10-15 second clips that navigate as they please). The company is developing a mind-blowing array of AR applications. “We have been making the camera (mobile phones) from a device for documenting experience into a communication device,” he says. “The next 10 years will be about making it an AR device.”

Taxes are something you immediately think about when it comes to video content but taking care of the taxation element of pay video services is art of the offer of subscriber management provider Cleeng, which not only automates the calculation of the different American state taxes for NFL+ in the U.S, but does the same globally for the NHL’s digital platform.

Cleeng also provides the chatbots for the NFL platform. “About 80% of customer communications are easily dealt with by the bots,” says Hjalmar Koedijker (another Sportel first-timer). BTW, that’s called the ‘deflection rate.’

Definitely not a Sportel first-timer is Heather White of Indycar, who has attended every single event in Monaco since the start. (I was keeping pace with her until a few years ago before getting back on track this year.) She points out that 15 of the 23 drivers who take part in every Indycar race are international. “We’re holding our own as an American product in the international market. We are a good complementary product. Indycar is shown by most of the F1 broadcasters in Europe.”

The all-time Sportel attendance champ is Karen Manzi of Matchroom, who has not only been at every market in Monaco but all the international editions too.

Rory Renwick has returned to Sportel after an absence of about 15 years (he was here for the Ladies European Tour) with Swedish tech provider Accedo. He sees the tech emphasis as transformational in terms of the way everyone needs to navigate today’s sports market. “Sometimes companies are competing, sometimes they are collaborating and integrating with one another. It can be tricky to unpick the complexities. I think providers should help sports clients more.” He adds, “Sports can be timid when it comes to innovation.”

Christian Osterode is at his first Sportel in his new commercial role with World Rowing after years of attending for the equestrian FEI, he is an industry veteran.

Claude Ruibal is at the market with his multi-faceted Ubiquity Sports. He has invested in a couple of tech start-ups offering personalized clipping (Sizzle) and AI-powered ad serving (Catapult X). He is also looking at investments in sports properties.

Gregory Bolle, formerly of LaLiga, is attending with Playfoot, an advanced metaverse solution to create immersive experiences for fans.

“Gaming is what young people do. Sports need to adapt. We’re a white-label solution to help clubs gameify their content in order to engage the younger demographic in a metaverse environment.”

Jay Stuart has been to more additions of Sportel than he would care to mention. The Editor-in-Chief of iSportConnect, was our man on the ground in Monaco this week, in this article he reports back his findings from the event.