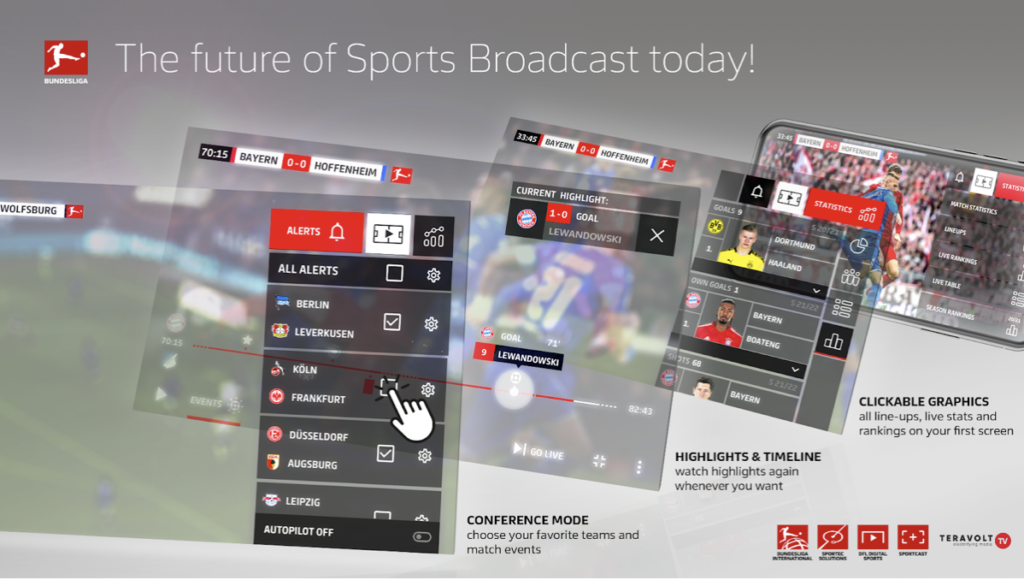 In this Digital Cafe, David Granger takes a look at where tech and sport are heading over the next few months as fans get more and more say in how they spectate which is good for them and for business.

Not so very long ago personalisation meant you could choose your season ticket seat for home games. Times and technology have moved on and much of the innovation in sport gives fans an ability to make the experience, be it live or on screen, their own.

Proof? Many of the entries – and winners – of the 2022 Sports Technology Awards focused on personalisation of the fan experience – either using.

From the entries to those awards are some of the tech and strategies we’ll be seeing used more and more of in the coming months.

Using an app to boost interaction

The proliferation of sport online has meant a proliferation of potential losses for clubs and federations. Illegal streaming, illegal clipping of content, re-posting of images… is a loss of both revenue and quality control for rights-holders.

One way to combat this is to create your own social channel, which is what the Bleachr app does. By owning the means of publishing, you are able to stop some of the loss of data, engagement, dollars, and fans to social media.

The app builds engagement for spectators and clubs allowing the latter to build fandom, monetize that audience, integrate sponsors, and capture data through gamification.

The app becomes a federation or team’s own social media channel to engage their fanbase remotely, generate revenues, and capture data volunteered by fans. The beauty is it can be used by any content creator with a mobile device, to generate revenue as they build fan interaction.

Bleachr integrates the appeal of live sport with interaction. Its latest iteration introduces elements such as betting, NFTs and gamification so the appeal gets deeper as well as broader for both fans and federations.

Apparently, your average Bundesliga fan has three or four favourite teams (four times the possible heartache, four times the potential elation). This stat is one of the drivers behind their interactive feed. You can choose which matches being played simultaneously you follow on their new app.

You can see highlights whenever they want, get notifications, check live stats and line-ups – all without leaving the main screen. The interaction also gets personalised with localised graphics in various languages, multi-audio support, voting tools, editorial such as pre-match studios and commercial ads/banners.

The app is device agnostic, so available to anyone and it takes personalisation in both spectating and interaction to another level. For all of the four games and teams you might be supporting at one time.

As cricket formats evolve, The Hundred has worked with sports marketing and fan experience specialists InCrowd, utilising technology to put a new spin on things for existing fans and attract new ones. What sets it apart is it provides game information and assists spectators with the live experience by purchasing tickets via their app.

The aim was to engage new fans as well as retain existing cricket fans and does it through, once again, personalisation, gamification and activation. What this means is there are polls to vote in, there’s some neat AR interaction, full results as well as purchasing and sharing tickets via the app.

And what this also does will provide the ECB (English Cricket Board) with some valuable data on the app users and their audiences.

The combination of information, entertainment, ticketing and Covid declarations mean The Hundred app is a superior offering. Add in the promotion of the women’s and girls’ game and the thought which has gone into the target audience needs and the requirement to launch a new tournament make this a valuable tool to fans, federation and the finance department.

WSC Sports’ AI tech is clever stuff. In real-time during live games or matches it can identify moments and events and publish them as short-format video.

It means rights-holders and federations can extract maximum content from an event, create potential new revenue streams and give a personalised experience for fans on every platform. In collaboration with Google, WSC has automated content creation to cut, crop and add graphics to highlights, for rights-holders to use across their various digital platforms.

It’s already used by ESPN, DAZN, YouTube as well as the NBA, NASCAR and MLS to capture and publish live clips in real time.

Which of these were winners? Check out The Sports Technology Awards website for details on the 2022 contenders and winners and how you can get involved next year