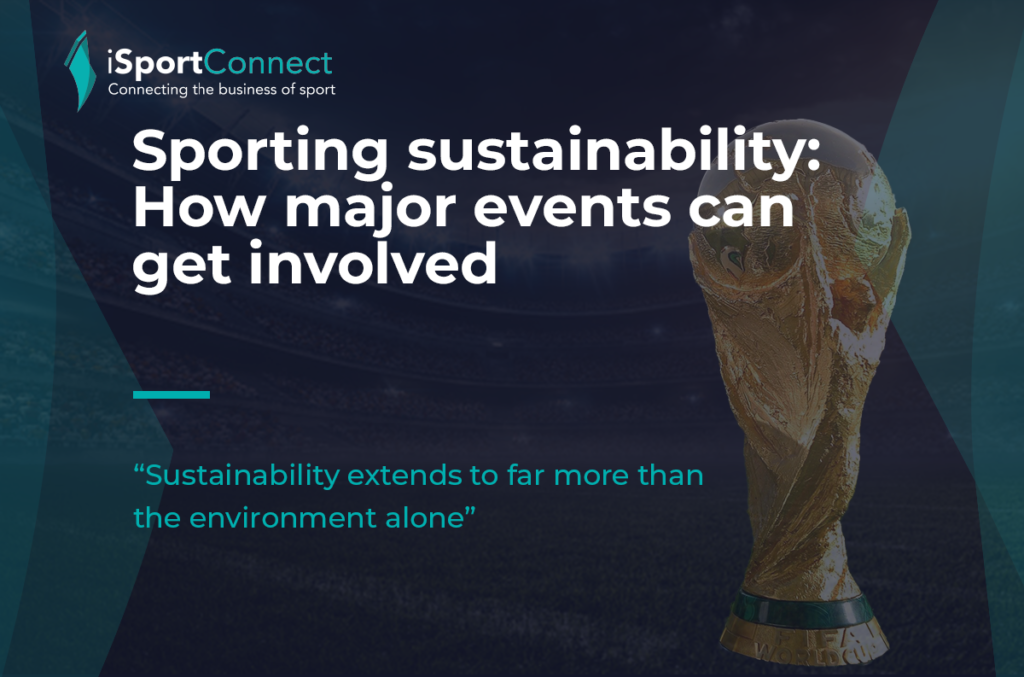 Winning a bid for a major sporting event is a huge honour. It puts your country on the world’s stage, increases tourism and boosts the economy. Not to mention what hosting does for increasing a sports’ following and inspiring people to get active. But what about the impact these events have on our planet?

Qatar 2022 is here. From articles about human rights to concerns about the heat the game will be played in, FIFA’s choice has been controversial from the get go. The hope is that this criticism has been turned into opportunities for improvement.

Architecture appears to be integral to Qatar 2022’s sustainability strategy. A lot of effort and attention has gone into sustainable design and the legacy of the tournament’s eight stadiums. Most notably, Stadium 974. Made of 974 storage containers, it will be dismantled at the end of the tournament, while six others will become hotels or business centres. New parks have also been created surrounding the stadiums and training sites, which are irrigated using recycled water.

They’re sustainable builds for sure. But as the world is watching, and likely judging how sustainable this tournament will be, the big question is: will Qatar 2022 bring about social change?

Sustainability extends to far more than the environment alone. From the Latin ‘sustinere’, meaning to ‘hold upright’; the upholding of human rights should be high on this World Cup’s agenda. Recycling bins won’t cut it, as the tournament claims to be working in line with the United Nations 17 Sustainable Development Goals. Sport is undoubtedly a force for good, but organisations need to dig deep and think of more than promising to offset their emissions. Perhaps there should be more recognition for sports that really are in the lead where sustainability is concerned.

The Olympic Games in Paris 2024 are set to be both ‘spectacular and sustainable’. The hosts have given themselves the target of being the first major sporting event to positively impact the climate. ‘Prioritising frugality and utility’, Paris placed environmental responsibility at the core of its bid, putting a lot of planning into reducing emissions prior to the games starting. Most notably, 95% of the games will be hosted in existing or temporary venues – all specifically chosen to reduce the number of new builds needed and environmental impact. Only two new venues are being built – the Olympic and Paralympic Village. Both are designed to be an eco-district for French residents following the games, giving Paris 2024 a lasting eco-legacy. Très magnifique.

Of course, major sporting events can also play a part in helping societies move towards a circular economy. Banning single use plastics from events is a nice start – but it can’t be the finish line. The Tokyo Olympics was a great example of this. Podiums were made from recycled plastic, athlete’s beds were made using cardboard, and even the medals were constructed with recycled electronic devices. But it’s not just down to organisers, sponsors should get involved with sustainability too. Events are a great opportunity to live your brand’s values by doing acts, not just ads. For the 2022 Australian Open, in their ‘Aces for Oceans’ campaign, long term sponsors Kia pledged to remove plastic from the sea for every Ace scored. Kia currently turns recycled plastic bottles into seats in their electric models. With so much waste in the world, isn’t it time we had a bit of competition to see how we could reuse materials around sporting events?

If they’re going to have a place in the future, longer standing sporting events need to step up and do more, as new organisations are entering the arena who have sustainability baked into who they are.

Take Sail GP for example; ‘Powered by Nature’. Sustainability is one of the things that sets this sailing championship apart. Alongside the races themselves, the sport has an ‘Impact League’ – a secondary leaderboard in which teams earn points for actions that reduce their carbon footprint or help accelerate inclusivity in sailing. Every team competes across 10 different sustainability criterias, from travel and accommodation to how they use their voice and influence. Initiatives such as this stop progress being held back by policy and bureaucracy and give teams the autonomy to take matters into their own hands and sail ahead with better solutions.

Sail GP events also go to great lengths to reduce their carbon footprint. The Denmark Sail Grand Prix moved fans to the venue using electric buses, offered plant-based food options and recyclable cutlery. Even sponsor Carlsberg got involved; designing a new beer bottle consisting of wood fibres, with an internal barrier made of a plant-based mass to keep the beer fresh and full of flavour. Carlsberg are testing the new packaging, with the vision that these new fibre bottles should have a CO2 release that’s 80% lower than a disposable glass bottle. Cheers to that.

From the food and drink we choose, to the sponsors we support, to the sports we play – sustainability is something we can all choose to get behind. Sporting events are a special thing to behold; the culmination of a lot of hard work, discipline and determination; full of human stories of endeavour, setbacks and triumph. Imagine if we harnessed this energy into forming solid sustainability strategies? With a bit of creative thinking, design support and scientists on side, I have no doubt sporting events can be a great play in helping the planet win.

To find out more about Cravens, visit their website here