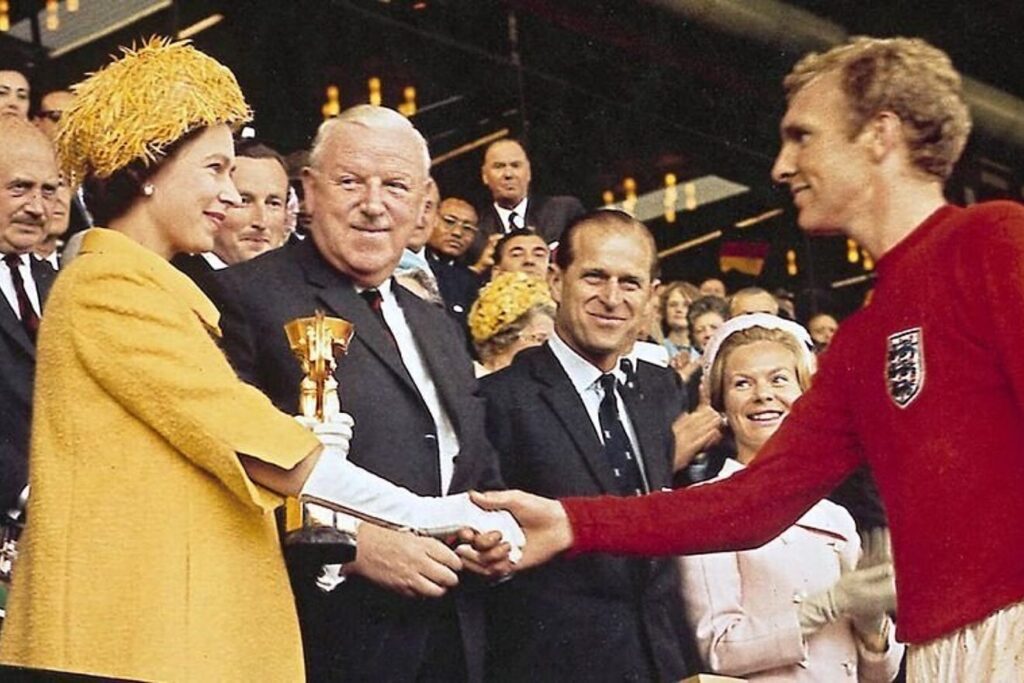 Michael Pirrie was a special advisor to Sebastian Coe at the London 2012 Olympic Games, in this article he remembers Her Majesty and looks back at her involvement in sport.

Sport was a constant presence in the Queen’s historic reign, throughout her long life of royal duties, diplomatic engagements and community and charitable events.

She opened Parliaments, she opened Olympic Games and Commonwealth Games in an era of unprecedented change.

Queen Elizabeth II embodied the values and passions of her nation and was an enthusiastic and ardent follower of sport.

As a young princess, Elizabeth watched her father George VI declare the 1948 London Olympic Games open at Wembley, following in her father’s footsteps more than six decades later when she opened the 2012 Olympic Games.

There was a total of 15 British prime ministers, 5 popes and 17 summer Olympic Games since she ascended to the throne in 1952.

In her life time she witnessed every edition of football, rugby and cricket World Cups

The Queen truly embodied the British motto: ‘Keep Calm and Cary On,’ and provided a rare and timeless decency and calmness in turbulent times.

Universally admired, she was the queen of hearts and a queen of sport.

The Queen understood her nation’s deep love of sport and how sport lifted the nation’s spirit and mood.

She also understood how sport connected her and the Royal Family with the wider community and how sport crossed social barriers and divisions.

The enduring monarch also understood sport’s importance in international affairs, and flags were lowered across the globe following her death.

The Queen especially grasped the importance of sport for the diverse peoples and nations of the Commonwealth, with Buckingham Palace serving as a landmark background prop for the Queen’s Baton Relay in the countdown to the Commonwealth Games.

Flags were lowered to half-mast at sporting venues and events as the sporting world mourned the Queen’s passing.

‘Manchester United shares the sorrow of the entire nation following the announcement from Buckingham Palace of the passing of Her Majesty, The Queen,” the club said.

“The club recognises her immense contribution to public life, including sport, both here in the United Kingdom, across the Commonwealth and around the world.”

The Queen embraced sport throughout her life and the sporting world embraced her.

She attended many iconic sporting events, most memorably when she presented the World Cup trophy to England captain Bobby Moore at Wembley in 1966.

England Football League Chairman Rick Parry said the Queen had a keen interest in sport, including football and “was a champion of our national sport throughout her many years of service.”

“The Monarch was at Wembley Stadium in 1966, in our national sport’s most famous moment to present captain Bobby Moore with the Jules Rim trophy after England defeated West Germany to win the World Cup.”

This love of sport was passed down to her children and grandchildren.

Her grandson Price William is an Aston Villa fan and became FA President in 2006 and vice royal patron of the Welsh Rugby Union in 2007, supporting the Queen as patron.

Meanwhile, Prince Harry has been the driving force behind the inspirational Invictus Games for war-injured veterans and athletes.

The Queen passed on her love of horses and horse racing to her daughter Anne, the Princess Royal, who represented Team GB at the 1976 Montreal Olympic Games.

Her daughter Zara Phillips followed her mother by competing in the same equestrian three day event at the 2012 London Olympics, in which The Queen played a pivotal but under acknowledged role.

While much attention has focussed on the Queen’s dramatic cameo with Her Majesty’s special agent James Bond in the opening ceremony of the 2012 Games, the Queen’s support during the bid for the London Olympics was essential to the campaign’s unexpected success.

The reception hosted by the Queen at Buckingham Palace was paramount to providing a London 2012 Olympic Games preview for IOC inspectors, who travelled to the palace by boat as London landmarks including Big Ben and Tower of London were illuminated along the Thames in the largest coordinated set of projections ever seen.

“I will never forget her total commitment to the success of the London 2012 Olympic and Paralympic Games. She has been a source of continuity and comfort…” said former London 2012 Olympic Committee chair Seb Coe, the current president of World Athletics.

While the Queen inevitably rose to every request and occasion of national importance, her participation in the James Bond helicopter parachute ‘jump out’ over Olympic Park with spy star Daniel Craig was as memorable as any of the Bond movies.

The sky jump illusion was the most closely guarded secret of Danny Boyle’s triumphant opening ceremony with those closest to the plan even doubtful it would take off until Her Majesty surprisingly gave her royal approval.

Plan B included speculation that Dame Helen Mirren might play The Queen in the film sequence.

Her Majesty kept to the secrecy protocols, surprising even her grandsons, Prince William and Prince Harry.

“Both of us were slightly surprised with our grandmother’s secret hobby that she had of parachuting, which went down unbelievably well,” Prince Harry recalled later.

It seemed appropriate therefore that The London 2012 Olympic Games and Paralympic Games, the biggest and most spectacular sporting events in UK history, would provide both a lasting legacy and tribute to the Queen.

The late IOC President Dr Jacques Rogge described the London Games as “the Happy and Glorious Games,” from the Queen’s national anthem, while the Olympic Park has also been named after Queen Elizabeth.

It also seems appropriate that key milestones in her reign also coincided with major sporting events.

These have included the London 2012 Games in her Diamond Jubilee while the Queen opened the Manchester Commonwealth Games in 2002, her Golden Jubilee year.

The Queen was joined by England football legend, David Beckham, and local hero, Kirsty Howard, in opening the Games.

While the world mourns the passing of the Queen, the late Monarch continues to inspire.

British running icon, Mo Farah declared that meeting the Queen was “one of the greatest honours” of his life.

Many think the same, even if they have not met her.