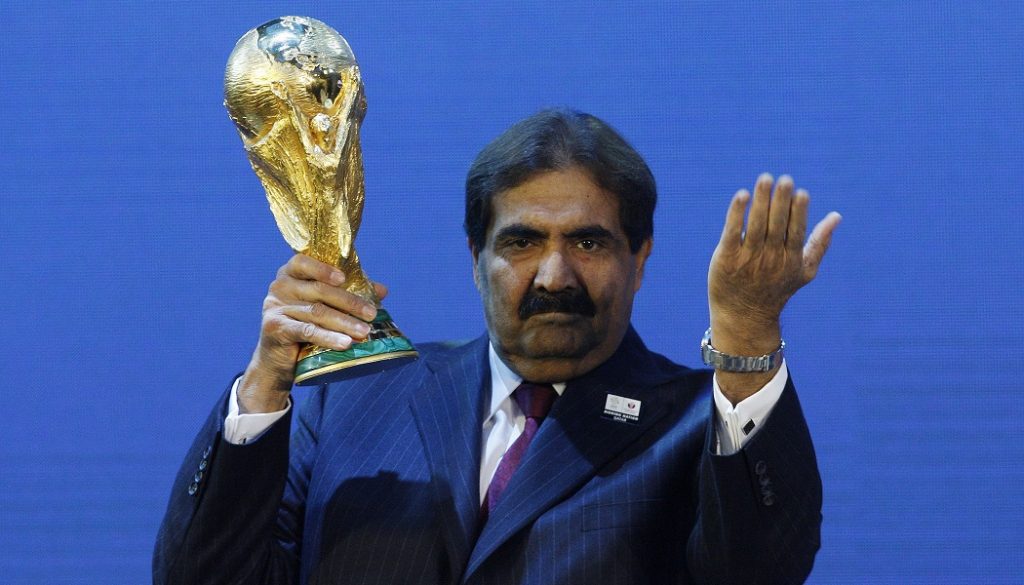 By Community | 5 days ago

David Alexander, is the Managing Director of Calacus PR, in this Member Insight article he looks at the issues surrounding the Qatar World Cup.

When Russia and Qatar were awarded the 2018 and 2022 FIFA World Cups respectively, cynics in the world of sport were far from surprised.

The word ‘corruption’ should not be bandied around lightly, but the fact that the Department of Justice in the United States served indictments to some connected to the bidding amid accusations of bribery has overshadowed the international governing body ever since.

One could argue that FIFA got away with one when it came to Russia 2018, with little more than murmuring about human rights despite the host’s questionable policies.

There were reports of more than 100 men going missing in the Russian republic of Chechnya after the launch of an anti-gay campaign.

A UK Foreign Affairs Committee report released ahead of the tournament said that LGBT individuals would be at “significant risk,” as they “not only face the risk of violence from vigilante groups, but lack adequate protection from the state.”

Ultimately the tournament passed without major incident, giving Russian president Vladimir Putin the PR coup he wanted to build his popularity before the move towards war against Ukraine this year.

With the four-year cycle switching to Qatar, the global consciousness – and the global conscience for that matter – has been far more vociferous given the controversies that have overshadowed the tournament.

Earlier this year, Norwegian football President Lise Klaveness, spoke at the 72nd FIFA Congress and remarked: “FIFA must act as a role model. Our game can inspire dreams and break down barriers, but as leaders, we must do it right to the highest standards.

“In 2010, the World Cup was awarded by FIFA in unacceptable ways with unacceptable consequences. There is no room for employers who do not secure the freedom and safety of World Cup workers. No room for hosts that cannot legally guarantee the safety and respect of LGBTQ+ people coming to this theatre of dreams.”

It’s fair to say that, while admirable of Klaveness, his sentiments have not been heeded. While there is a dispute over the numbers, the Guardian estimates that there have been 6,500 migrant deaths over 10 years, with those helping to build the stadia and infrastructure living and working in terrible conditions which has seen the tournament labelled “The World Cup built on modern slavery.”

The tournament was also moved from summer to winter, cutting across the domestic season in European leagues to add further controversy to the event.

While hosting a major tournament is often positioned as a tool for positive change, Human Rights Watch criticised the Qatari authorities for its discriminatory male guardianship system which gives few rights to women.

And little if no progress has been made.

Any faint hope that FIFA President Gianni Infantino would take the Organising Committee to task appeared impossible after reports in the Swiss newspaper SonntagsBlick that he had moved to Qatar himself.

The organisers have done little to change the narrative, with images of unfinished or spartan fan tent accommodation compared to the ill-fated Fyre Fest, and when FIFA needed some good news on the eve of the tournament, they scored another own goal.

With top sponsors paying up to $100m to be part of the four-year cycle, it came as a shock that Qatar’s strict alcohol controls were being extended with no alcohol sold at stadia apart from in the hospitality sections.

Leading sponsor Budweiser would be the biggest loser, and have valiantly tried to put a positive spin on developments by announcing that fans of the World Cup winners will get the beer that would have been sold at the event.

On the eve of the tournament, a leader with more humility might have accepted that mistakes had been made and lessons could be learnt.

No leader with a shred of integrity, especially not one with an ego and wanting to leave a positive legacy, would want to have blood on their hands and ignore the huge elephants in the room.

But Infantino is not that man, and used his press conference to lash out bizarrely at his critics.

Infantino said: “Today I have very strong feelings, I can tell you.

“You want to stay at home and say how bad they are, these Arabs, these Muslims, because it’s not allowed to be publicly gay. I believe it should be allowed. But it is a process. If someone thinks that hammering and criticising will achieve something, well I can tell you it will be exactly the opposite.

It will close more doors.

We cannot ignore the fact that Infantino, whether as a distraction or as part of some vast stream of consciousness, then suggested that secretive pariah state North Korea, guilty of weapons testing in recent months that could escalate into war, could be considered for a future World Cup, to help bring people together.

Nicholas McGeehan, director of the human rights group FairSquare, was critical of Infantino’s remarks.
He said: “Infantino’s comments were as crass as they were clumsy and suggest that the FIFA president is getting his talking points directly from the Qatari authorities.

“Deflection and whataboutery have always been at the core of Qatar’s PR efforts to defend its rank failures, and now they have the FIFA president doing their work for them.”

Amnesty International also released a statement, saying: “In brushing aside legitimate human rights criticisms, Gianni Infantino is dismissing the enormous price paid by migrant workers to make his flagship tournament possible – as well as FIFA’s responsibility for it.

“Demands for equality, dignity and compensation cannot be treated as some sort of culture war – they are universal human rights that FIFA has committed to respect in its own statutes.”

There is very little at this point that FIFA could do to make things worse – but they have done so by threatening players with a caution if they wear a rainbow armband with “One Love” written on it.

Teams including England, Wales, Belgium, Holland, Switzerland, Denmark, and Germany had all announced in October that they would wear the OneLove rainbow captain’s armband as an act of solidarity with the LGBTQ+ community who are criminalised in Qatar.

Hours before England’s opening game against Iran, the nations issued a joint statement confirming that they would now not wear the armbands or risk a yellow card.

“We are very frustrated by the FIFA decision which we believe is unprecedented.” read the statement.

“FIFA has been very clear that it will impose sporting sanctions if our captains wear the armbands on the field of play. We were prepared to pay fines that would normally apply to breaches of kit regulations and had a strong commitment to wearing the armband.

“However, we cannot put our players in the situation where they might be booked or even forced to
leave the field of play.”

America’s top diplomat criticised the decision and said it was “always concerning … when we see any restrictions on freedom of expression. It’s especially so when the expression is for diversity and for inclusion.

“And in my judgment, no one on a football pitch should be forced to choose between supporting these values and playing for their team.”

Some would argue that to defy the threats would have been one of football’s ‘Jesse Owens’ moments, citing the black sprinter who won four gold medals at the 1936 Olympic Games in Berlin which were seen as a showpiece for the Third Reich and their Nazi leader Adolf Hitler.

It’s also hard to argue that a protest with permission is as meaningful as one done on instinct or conviction.

The German Football Federation’s media director, Steffen Simon, explained that England had been put under severe pressure not to wear the armbands and that they were considering legal action against the governing body.

He commented: “The tournament director went to the English team and talked about multiple rule violations and threatened with massive sporting sanctions without specifying what these would be.

“We lost the armband and it is very painful but we are the same people as before with the same values. We are not impostors who claim they have values and then betray them. I can understand the disappointment. We had the choice between the plague and cholera.

“FIFA has forbidden us from using a symbol of diversity and human rights. It said the ban would be linked to massive penalties (in the nature of) sporting sanctions without concretising exactly what it meant. The DFB is keen to clarify whether Fifa’s procedure is in fact legitimate.”

The fact that the German team did their team photo with hands over their mouths and then Germany interior minister Nancy Faeser wore the armband as she sat next to Infantino in the stands of their opening game against Japan.

In another move to underline a lack of tolerance, FIFA banned Belgium’s away kit which has the word “Love” on the collar and a rainbow-coloured trim on the shirt standing for diversity, equality and inclusivity.

Belgium’s Jan Vertonghen said he is “afraid” to talk about human rights after the rainbow-themed armbands were banned at the World Cup.

“We’re just saying normal things about racism and discrimination and if you can’t even say things about it, that says it all. I want to appear on the pitch tomorrow, so I’ll leave it at that.”

But the fact that Wales fans later had rainbow hats confiscated by local authorities while renowned journalist Grant Wahl was refused entry to the United States game and blogged: “The entire episode left me wondering: What’s it like for ordinary Qataris who might wear a rainbow shirt when the world isn’t watching here? What’s that like?”

The Football Supporters Association made a statement which summed up where football
has descended: “To paraphrase FIFA president Gianni Infantino – today LGBT+ football supporters and their allies will feel angry. Today we feel betrayed.

“Today we feel contempt for an organisation that has shown its true values by giving the yellow card to players and the red card to tolerance.

“Never again should a World Cup be handed out solely on the basis of money and infrastructure. No country which falls short on LGBT+ rights, women’s rights, worker’s rights or any other universal human right should be given the honour of hosting a World Cup.

“Since 2010 we have been raising questions about the suitability of Qatar as a World Cup host. Everyone could see this coming and it’s astonishing that, on the morning of England’s World Cup opener, FIFA are censoring players and the nine national FAs – including the FA and FAW – who wish to share a positive message.”

With the World Cup being held in Canada, the United States and Mexico in 2026, FIFA has plenty of time to address its own shortcomings.

Whether it has the appetite to do so remains to be seen.