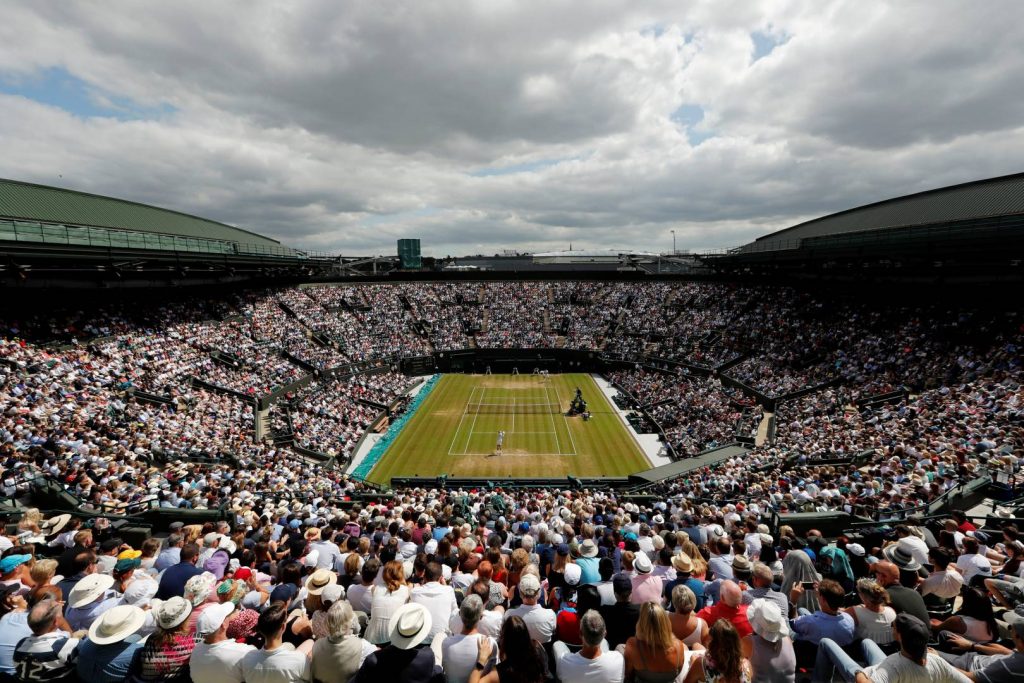 The sports news cycle now moves so swiftly the focus of the tennis world recently shifted within just a few days from questions about whether Rafael Nadal could win another French Open to questions of whether he would ever play again due to chronic injury.

In between cycles, Nadal answered the hot button question in tennis and sporting circles more widely.

Sport can be pure escapism, but the spaniard’s recent French Open win was more than a distraction in an unsettled world.

While ‘greatest ever’ accolades and debates feature in every sport, the question carried special significance in Paris beyond tennis clubs or coffee queue chatter.

The global interest in sport means the world reserves a special place for its best, and the three-way rivalry between Nadal, Federer and Djokovic has attracted attention across the sporting globe.

The French Open was historic in ways organisers of the All England Tennis Championships may hope Wimbledon could be in coming days with Nadal and Djokovic on course for a possible historic epic final.

Even before a ball was bounced or served, this Wimbledon has already created history for the tournament, for sport and for the wider world in a time of escalating war.

This centres around the ban on Russian and Belarusian players, the first of its kind, in response to the invasion of Ukraine.

The unprecedented ban was inevitable given the key role of the UK government in opposition to the war.

The response by the ATP and WTF to withhold player-ranking points from Wimbledon has failed to have any significant impact.

The resort to rankings has instead highlighted a failure by organisers of the tours to read the mood of the international community in the widening impact of Russia’s war, which is reshaping geopolitical alliances and sport.

Wimbledon has demonstrated the irrelevance of the ATP and WTF’s position, and that sport and politics will be forced to coexist in the current war.

Wimbledon’s successful first week involving players and spectators from across the globe also reinforces the tournament’s pre-eminent position in world sport even in uncertain times.

It sends a powerful message that while there may be sympathy for banned Russian players, Wimbledon acted correctly to support the people of Ukraine facing almost unimaginable suffering and hardship.

The player ban sends the message that sports can take decisive action against Putin and the Kremlin.

The message that Russia is committing crimes against humanity in Ukraine that will not be tolerated by society or by sport.

The landmark Wimbledon ban also highlights the roles sport can play in the international effort against the war.

The grounds on which Wimbledon imposed its player ban under guidance of the British Government remain relevant.

“We remain unwilling to accept success or participation at Wimbledon being used to benefit the propaganda machine of the Russian regime, which, through its closely controlled state media, has an acknowledged history of using sporting success to support a triumphant narrative to the Russian people,” it said.

The decision to withhold rankings, by contrast, struggles under scrutiny.

“The stance we are taking is about protecting the equal opportunities that players should have to compete as individuals,” the WTF tried to argue.

Try justifying that to the families of the dead and those crippled by Russia’s continuing missile strikes – including, recently, on the central city of Kremenchuk, in what the Ukraine president described as “one of the most daring terrorist attacks in European history.”

Or to former Ukraine tennis players who felt abandoned by tennis tour organisers and players who opposed the Wimbledon bans.

These included Ukraine former tennis professional Sergei Stakhovsky, who recently tweeted: “To say I am disappointed would be an understatement …Never would expect that anyone can stand on the side of invaders and murderers …”

Sport can’t expect to be immune from the tragedy of war, and losing ranking points is not like losing lives or losing a homeland – these can’t be replaced unlike ranking points – and misses the point.

While a raft of business and finance sanctions have hit Russia’s economy and millions of lives, many Russian athletes have continued to prosper in the war.

The banned Russian and Belarusian tennis players will recover quickly after Wimbledon and resume life on the lucrative tennis circuit.

The controversy over player bans and rankings threatened to overshadow the important role of sport in the Ukraine crisis.

This was highlighted by Ukraine’s improbable recent victory over Scotland during the World Cup qualification phase.

The embattled nation’s football team was cheered on thousands of kilometres away by front line troops in trenches and families hiding in bomb shelters.

“It is difficult when every player is thinking about their father, mother and relatives back in Ukraine,” said coach Oleksandr Petrakov.

President Zelenskyy is reported to have personally given his nation’s football team members leave from any military duties to attend a pre match camp in Slovenia.

The ranking penalties on Wimbledon represented the most significant threat so far to the solidarity in efforts by global sports organizations to include individual Russian sporting figures and athletes in sanctions to punish the invasion of Ukraine.

The continuing success of this Wimbledon without the support of the ATP and WTF is significant.

Wimbledon is the highest profile and most influential sporting event to impose player bans against Russia, signalling an end to recent decades of sporting events devoid of bans and boycotts.

It reinforces the global effort against the war and paves the way for similar bans at major sporting events.

World Athletics, track and field’s world governing body, has also excluded Russian and Belarusian athletes from its upcoming world championships in the United States, the biggest track and field event outside of the Olympic Games.

The ranking penalties risked further division and politicisation of tennis and international sport and diluting the impact of sanctions.

Wimbledon’s global profile may have presented Putin with a significant international public relations coup in the event of Russian on-court victories at one of the world’s most famous sports settings.

Fears that lost ranking points would deter players and reduce Wimbledon to an exhibition style event have failed to eventuate, with few protests, solid public support and a large turnout of the worlds best players outside of Russia coming to Wimbledon.

These include Rafael Nadal and Novak Djokovic, in the next instalment of the historic battle for tennis supremacy, which has transformed global interest and popularity of tennis.

The presence of the fierce rivals at Wimbledon intensifies conjecture over the best male tennis player, which, for many may have been resolved, at least temporarily, on the rich red clay of Roland Garros centre court last month.

While Nadal was the first player to break the 21-grand slam barrier at the Australian Open in January, the win in Paris has placed the heavyweight tennis title firmly in the Spaniard’s grasp.

The ‘best ever’ sobriquet had turned into a marathon five set tie breaker as ‘The Big Three’ chased success, history and each other at iconic grand slams around the world.

The French Open victory provided greater clarity in the race to the Everest of tennis, which had resembled a three-way photo finish climb.

When the swirling clouds of clay dust cleared, Nadal was the last of the three tennis titans still standing on Roland Garros, but only with the help of pain killing anaesthesia coursing through his body.

Nadal was the answer to the question that has absorbed much international sporting attention, now building again at Wimbledon in anticipation of a blockbuster centre court encounter.

The ‘best ever’ title was of interest initially to the tennis fraternity of stars, followers and historians.

Global interest escalated as the trio’s tussles intensified and seemingly unassailable milestones were surpassed with each passing grand slam.

Nadal has performed at such high levels and for so long – winning his first slam as a teenager in 2005 – the Spaniard’s achievements have perhaps not been adequately appreciated.

Often referred to as the “king of clay,” Nadal is more like a modern day Spanish conquistador conquering new sporting territories.

Nadal does not only have feet made for clay, he is a player for all seasons with multiple victories on all grand slam surfaces.

Olympic gold medals have long been the pinnacle of sporting excellence, but Nadal’s recent French Open triumph may have transcended traditional measurements of sporting accomplishment.

While Nadal’s durability and humility have softened the media spotlight and scrutiny on the icon, his grand victories warrant renewed recognition of his contribution to sport.

Nadal – the first to 21 grand slams and first to 22 titles – may be the best athlete of this century so far.

If tennis grand slam tournaments can be seen as Olympic-styled world championships open to the best from around the globe, Nadal’s record 22 tournament wins and Olympic gold medals compare favourably with the medal counts of Olympic legends Michael Phelps, Usain Bolt and others.

The focus on sporting results in news cycles provides little opportunity to explore other aspects of elite athletes like Nadal.

While this is further complicated by limited media access to sporting legends, Nadal has provided a revealing insight into his own success.

Nadal’s right to be viewed as the best in his sport is perhaps now almost irrefutable – irrespective of how he performs at Wimbledon.

His ‘best ever’ credentials are likely to pass extensive cross-examination in any court of appeal or public opinion.

Eleven of Nadal’s titles have been achieved against arch rivals Federer and Djokovic at their peak.

While superlatives are often tossed around like confetti, Nadal has consistently defied critics and adversity, rising Lazarus-like from seemingly hopeless situations with miraculous comebacks.

These include his first grand slam victory this year at the Australia Open, regarded as one of the great sporting performances of recent times after recovering on crutches from a crippling foot injury and Covid.

Rallying from behind, with almost no margin for error, Nada prevailed in a five set, five-hour thriller after losing the first two sets and coming back from break down in the third to defeat world number 1 Daniil Medvedev.

The sudden first round departure of Serena Williams, ending another tilt to be the best woman’s player in the sport, and surprise retirement of reigning women’s champion title Ash Barty earlier in the year to play golf, adds unexpected layers of history to Wimbledon 2022.

It also heightens focus on the Nadal-Djokovic rivalry with Federer indefinitely sidelined by injury.

Wimbledon provides Nadal with the opportunity to achieve an almost unbeatable record grand slam lead, and Djokovic, with 20 titles, the chance to play catch up.

The drama unfolding at Wimbledon, ironically, looks set to provide a temporary escape in coming days from the inescapable realities of war that had threatened the showpiece.