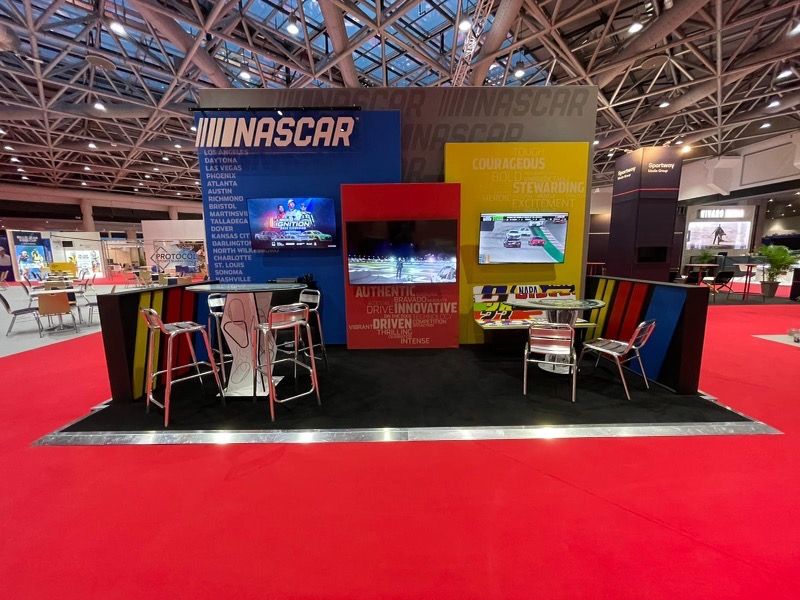 The NASCAR stand at Sportel was busy as usual this week as the series looks ahead to holding its first-ever street race in 2023 as the showpiece of a two-day downtown festival July 1-2.

The Daytona 500, which kicks off the 65th season next February 18, will be seen in 195 territories around the world.

The pre-season Clash at the Coliseum will take place in Los Angeles on February 5. It’s the second year of the special exhibition event held on a quarter-mile track inside the iconic Olympic stadium. In the first year 70 per cent of attendees had never been to a NASCAR event before.

NASCAR is a distinctly ‘American’ motorsport product but that does not get in the way of its international success. “We don’t dumb it down for the global market,” said Keith D’Alessandro, senior co-ordinating producer. “But we do usually localise the presentation.”

International viewers see the same coverage as U.S. audiences on Fox and NBC, which split rights, except for branding and other elements that are specifically for the domestic market and are masked.

“The world feed is not an afterthought,” D’Alessandro said. “It has its own dedicated production staff to deliver races in real time.” They also produce a 52-minute cutdown of all races for the partners which don’t want to go live.

NASCAR launched its OTT service in 2016. NASCAR Track Pass, available worldwide, carries live coverage of all three series, plus ancillary content. “We don’t see it as a cannibalizing our broadcast distribution,” said Nicholas Skipper, managing director of media strategy. “It’s a complementary offering
that appeals to dedicated fans in particular.”

NASCAR is seeing strong interest in its subscription online iRacing simulator product and runs a competition series. Top driver William Byron of Hendrick Motorsports was an iRacing champion as a teenager before progressing to the track.

One of the most striking things about Sportel in Monaco is just how wide-ranging the event is, with exhibitors and delegates coming from all sectors of the global sports media business.

That has been truer than ever this year as tech in all its many permutations grows in presence. This sampling of the dozens of fascinating conversations that I had at this year’s event should give clear proof of that.

Let me start out with a comment that gave me food for thought. How do you define a ‘tier’ when it comes to sports? I was chatting with a tech supplier who referred to Tier 2 and Tier 3 sports. When I asked for examples, I was surprised to hear one of Europe’s biggest football leagues described as Tier 3.

The person I was talking to explained that from his company’s viewpoint the criterion for being in one tier or another was not about audience or popularity but purely about a sport’s budget and appetite for spending on innovation. By that standard I’m sure many Sportel attendees wish Tier 3 were a bit less crowded…

Melissa Soobratty of World Table Tennis was at Sportel with the first-ever full calendar for the sport. The 2023 WTT Series will have 34 stops. The World Championhips take place in Durban next May. IMG handles production and distribution for the federation… Beach volleyball, 3×3 basketball and 12 other sports will be on the programme of the 2 nd edition of the World Beach Games in Bali from August 5-12, 2023.

The multi-sport event is organised by ANOC (the Association of National Olympic Committees). Robin Mitchell of Fiji as re-elected as ANOC president this month. Sports Tribal is the name of a new FAST (free ad-supported streaming) platform that will feature 50 linear networks available on the app. “We’re free on Samsung right next to DAZN and MLB,” Amory Schwartz said at Sportel.

“FAST is growing so fast that Pluto now has about 1 per cent of all TV viewing, which is amazing when you think about it. Our average viewing session time is 46 minutes.” Most YouTube channels don’t come close to that… Eurosport and IOC alumnus Vincent Chupin’s VC International is working with Paris 2024 and the IPC.

He told me he is seeking to build a real sustainable business in Africa. There was a visionary on the Sportel conference programme who is not often credited as such. Simon Brydon founded Cycling.TV as one of the very first sports OTT channels. When he sold out to NeuLion in 2007 it was still early in the market’s evolution. “Then everybody started focusing on tech instead of content, which never makes sense because technology is a commodity.”

After a stretch at Racing UK he joined Synamedia, for whom he was speaking at Sportel on anti-piracy… ATP Media issued a tender for rights in Europe last month and Alan Bruno was on the stand at Sportel to follow up. Rights are available from 2024. ATP events are on Sinclair’s Tennis Channel in the U.S. and beIN Sports in Australia…

Iggy Jovanovich, who was part of the Australian SportsTech Trade Mission that iSportconnect hosted in London in August, was at Sportel for the first time for his company Gerford AI. “It’s less transactional
than the events I’ve been to in the States,” he said. “There it’s about doing deals. Here you start conversations. It’s a different process.”

Alan Ghanime of anti-piracy provider TMG says the starting point for anti- piracy efforts is locating the issue. The company trawls the internet and detects streams on search engines, P2P networks, internet forums, private networks, community sites and social sites. Not all piracy is really worth fighting. It’s all about the quality of the product. When the pirates are as good as the real thing, that’s bad. If the quality of the real thing is a lot better, it’s a disincentive for people to go pirate…

Iain Adams and Alex Sharp were at Sportel for Amagi, which has flown into the FAST space for the likes of NBC, DAZN and beIN, and will underpin the new ITV X launching with the FIFA World Cup coming up soon. “FAST is a revolution backwards,” Adams said. “Free, advertising-supported TV is the ‘new’ thing, when of course it’s where it all began.”

Veritone, one of the heavyweights in the merging AI market, had a big Sportel stand to market its technology, which is based on an aggregation of about 500 different cognitive AI engines. “We think of what we do as monetization tools,” said David Candler. “The eye is always on monetization.” Clients include the Masters, USTA and USGA…

Sports news and results are at the heart of the PA Media news agency, which had a stand manned by Will Staley at Sportel. At any given time the company has 50-100 editors working at its London HQ…

After Sportel Bali in February, Sportel will be heading back to Miami May 9-10,